Garter Day was yesterday, and the Queen, Duke of Edinburgh, Prince Charles, Prince William, Prince Andrew, Prince Edward, Princess Anne, Kate Middleton, Duchess of Cambridge and Sophie, Countess of Wessex all came out for the Order of the Garter ceremony/procession at Windsor Castle.  Kate and Sophie were spectators.  The others are actually in the Order.  Camilla, Duchess of Cornwall was due to attend, but she had sinusitis and stayed home (Get well soon, Camilla).

Anyone notice Kate making fun of William’s hat in the video below?  It’s around the 2:31-2:32 mark.  She wiggles her head in jest of his feather.

Historical info?  Anyone, anyone, Bueller?  The Order of the Garter was established in 1348 by Edward III, and is the most senior order of chivalry in Britain.  Appointment to the order is solely the gift of the Sovereign and honors those with outstanding public service or those who have served the Sovereign personally.  The patron saint of the Order is St. George (also the patron saint of England).  They only started letting non-royal women into the Order in 1987, and the first woman actually admitted was in 1990 (Lavina, Duchess of Norfolk).

Kate wore an ice blue coat by Christopher Kane.  She previously wore the coat in 2012 to the Olympics Opening Ceremony as well as the Palace reception beforehand.  It’s a silk satin fabric and quite shiny.  Kate wore a matching ice blue hat by Lock & Co.  She carried her LK Bennett “Natalie” straw clutch that she’s carried a number of times over the years.  Kate wore a new pair of nude heels that appear to be much lower than she usually wears (no LK Bennett Sledges, yay!).  Kate wore her unidentified blue stone and diamond drop earrings first seen on the SE Asia tour.  I wouldn’t say it’s my favorite look from Kate, I much prefer her in jewel tones, but she looked nice. It’s kind of similar to the outfit she wore for Trooping the Color.

Sophie, Countess of Wessex wore a white Bruce Oldfield dress with ostrich feathers around her neck, and a Jane Taylor hat.  I like the dress and I love the hat.  I didn’t like the feathers at first, but they’re growing on me.  From afar they seem to swallow her up, but close up I kind of like them.

The delightful and stunningly dressed Countess of Wessex with The Earl of Wessex at the Garter service Windsor pic.twitter.com/Dfr5ZEnZCU

Kate and William shared a carriage with Charles after the ceremony, and OMG Kate got to sit next to Charlie!  I wonder what Kate and Charles talk about?

The Prince of Wales with his daughter-in-law Catherine of Cambridge after the Garter ceremony, at Windsor Castle pic.twitter.com/sVQeB15at1

In Prince Grumpy Face news, Kate brought little George to William and Harry’s polo match on Sunday (which was Father’s Day).  Talk about burying the lead, right; what is wrong with me?  Prince Grumpy Face will not be denied!  Prince George is walking now, or almost walking.  He was standing and moving around, even kicking a ball around—hence all the World Cup headlines in all the papers.  He’s also quite squirmy and independent and “made a determined crawl for freedom”.  Bwahahahahaha!  The Daily Mail has no idea how funny that line is.  If I were him, I’d make a determined crawl for freedom, too.  Unfortunately, Kate grabbed him before he could get too far.  I bet George was so pissed.  Hence this brand new awesome Grumpy Face photo.  Then our Grumpy Faced overlord turned his father into a servant. 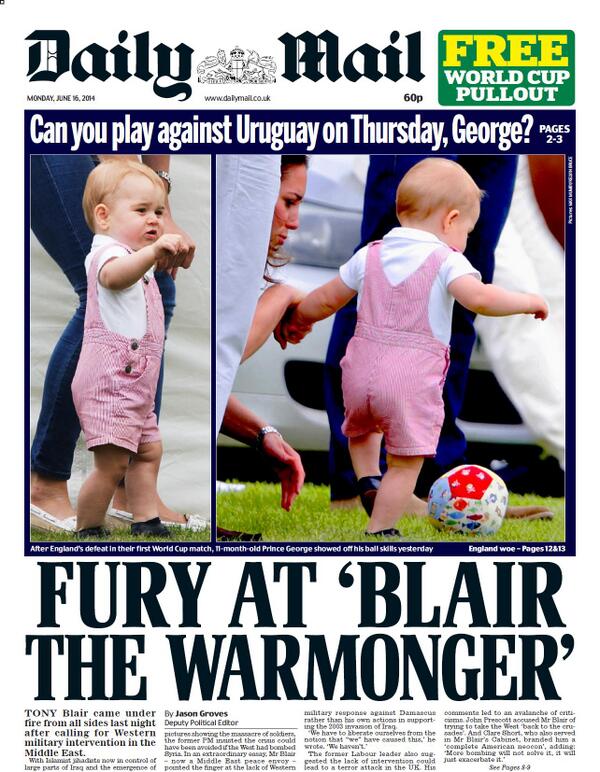 In an update to their schedules, Kate, William and Harry will attend the Tour De France Grand Depart in Yorkshire on July 5.