Tiaras at the 2017 Nobel Prize Ceremony 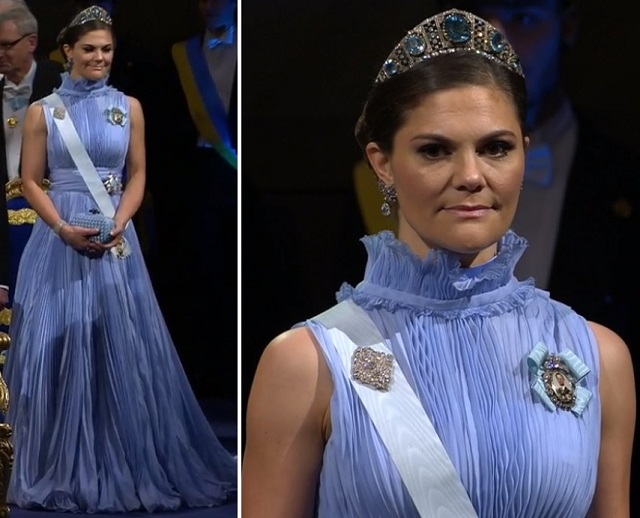 I first fell in love with the Swedish Aquamarine Kokoshnik Tiara in 2015 when Madeleine wore it to the 2015 Nobel Ceremony, and I love seeing Crown Princess Victoria wear it for the first time here. She added an extra diamond rivière to the base to give it some extra sparkle. Victoria also wore Queen Silvia’s diamond floral earrings, a large diamond brooch, and a large diamond bracelet.

Victoria wore a blue Jennifer Blom gown which would look so much better without the high collar. As always, she wore the Order of the Seraphim and the royal family order. 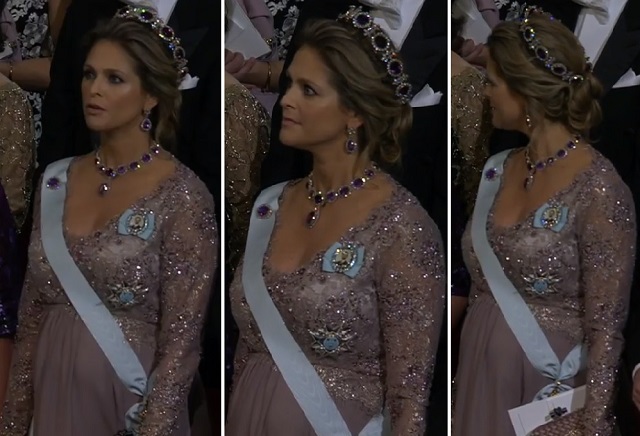 Princess Madeleine wore my all time favorite tiara: Queen Josephine’s Amethyst Tiara. She also wore the earrings, necklace, and brooch from the parure. Her gown is bespoke Seraphine Maternity in pure mauve silk featuring hand-beaded overlay in precious gold lace. Madeleine wore the Order of the Seraphim and the royal family order.

Madeleine attended the ceremony, but skipped the banquet due to a pregnancy-related back problem which causes her to be unable to sit for extended periods.

Princess Sofia wore a dress from Ida Lanto, which is pretty, I suppose, although the color is boring to me.

Sofia’s tiara, though, is the interesting part. Sofia wore her Diamond and Emerald Wedding Tiara, but this time with pearls in place of the emeralds. She debuted the diamond-only version back in November, and I said at the time that without the emeralds the tiara was missing something, so I love this pearl version. The pearl version is my favorite version, actually.

Sofia also wore diamond earrings, and a diamond and pearl bow brooch securing the sash of the Order of the Seraphim. She wore the royal family order as well.

Queen Silvia wore a purple dress which she previously wore on a State Visit to Germany in 2016.

Silvia wore Queen Sophia’s Nine Prong Tiara with diamond earrings and a diamond necklace. A diamond floral brooch secured the sash of the Order of the Seraphim, and she wore the royal family order.

King Carl Gustaf is never not grumpy, but at least Prince Carl Philip is smiling. I’d give KCG a pass for not knowing he was being photographed in this moment if he ever smiled in any other photos, but since he doesn’t I won’t.

Here’s a photo of Prince Daniel for you.

The menu for the Nobel Banquet: 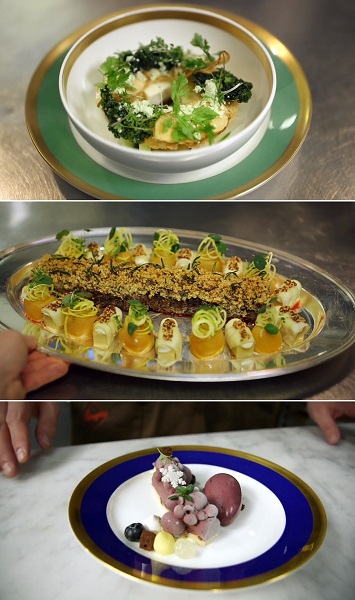