After about a year and a half of private meetings of The Royal Foundation’s Taskforce on the Prevention of Cyberbullying, which Prince William launched last year, they finally unveiled some information/plans for action yesterday, November 16. 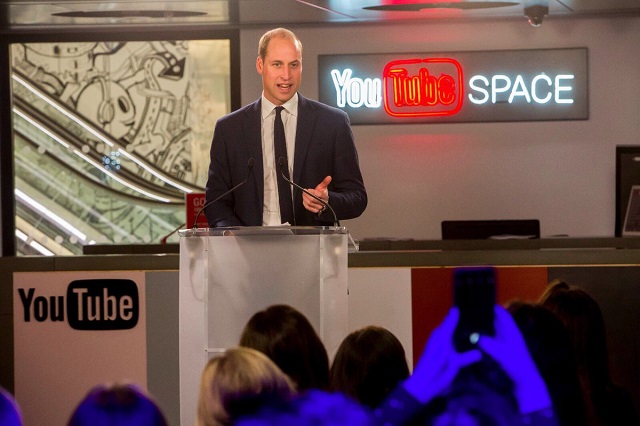 William and the Taskforce members met at Google London’s YouTube Space where William gave a speech about the Taskforce’s goals and plans of action.

“For me, the issue of cyberbullying and its consequences are personal. My work as a HEMS pilot has exposed me to the tragedy of suicide and the despair felt by those who have been subjected to cruelty and abuse. Through my work on mental health, I have spent time getting to know parents and children for whom the impact of online bullying has been devastating. And as a parent myself, I understand the sense of loss and anger of those particular families who have lost children after they were the targets of campaigns of harassment. I feel a responsibility to do what I can to help.

“I began work on the issue of cyberbullying a few years ago and as I explored it in more detail, I felt a growing sense of alarm. I came to realise what it meant for bullying – an age old problem – to be supercharged by the power of social media. New, exciting platforms that at their heart, want to help people make and maintain friendships, were allowing bullies to take their abuse beyond the traditional theatres of classrooms and playgrounds. They could now follow their targets home.

“A new generation of young people – tech savvy, connected, and optimistic about the future – were encountering new social spaces without established standards of behaviour to guide them. And many parents and carers, who seek to make their homes a haven of safety, felt powerless to protect their children. And even worse, some had no idea about the suffering their children were experiencing from bullying that was coming through their phone or their laptop. My overall sense was that social media was in many ways an ungoverned space, where our children were fending for themselves. But as I looked into this issue more, I also gained a sense of optimism.

“I saw the example of Lucy Alexander, who is with us today. Sadly Lucy lost her son Felix after he experienced terrible bullying online. In her grief she felt compelled to take action. She spoke out and challenged the technology sector to work together to help protect other children from experiencing what Felix had. And I also realised that while we were encountering new forms of bullying, technology was also openly revealing behaviour that had often been hidden from view in the past. I came to believe that if the tech sector was willing to work together, their powerful tools could actually help children to put respect and support for each other at the heart of the way they interact with their peers. My hope was that internet companies would see the potential to pool their knowledge and resources to create spaces online that were much safer for our children.

“So I established the Cyberbullying Taskforce – through The Royal Foundation – to seize the opportunity that collaboration could bring. The Taskforce has brought together social media platforms and internet service providers with those organisations and individuals who strive to protect and support children and young people. And after a year and a half of hard work and frank discussions, we can today unveil a plan of action to protect children and encourage a new standard of behaviour online.

“There are four major planks to our plan. First, the technology company members of the Taskforce have agreed to adopt new guidelines to improve the process for reporting bullying online, and to create clearer consequences for those who behave unacceptably. Second, the Taskforce is launching today a new, national campaign to educate children on how to behave with respect and kindness online. The campaign is being driven by the powerful reach of the industry members of the Taskforce. Third, a new programme will be piloted through Facebook and Snapchat which will see the NSPCC providing emotional support to children in need, as a result of online bullying. And finally, the companies and charities that have been part of the Taskforce, will continue to work together to provide consistent advice to parents and to continue to take feedback from children and young people as they develop their policies.

“Through this process we have all been honest with each other. And of course I have been honest that I had hoped we might be able to go further. I hoped, for example, that the social media companies would agree to a form of standardisation around reporting and clear timelines for handling complaints. I also hoped that the tech companies might create a single, universal tool for children to report bullying when they see it or experience it regardless of which platform it happens on.

“I am, however, encouraged that the BBC is looking at the potential for a tech solution along these lines and all I ask is that everyone keeps an open mind as the outcome of the BBC’s work, and other options, emerge in the coming months. There is a lot more that can be done.

“I am proud that the Taskforce has generated a plan of action with some practical, industry-driven initiatives and I hope all of you are too. It is a big, important step in the right direction. It is my view that if this plan is implemented, the U.K. can become a world leader on tackling cyberbullying. Nowhere else has the sector come together and voluntarily agreed to take collective responsibility for tackling an issue like this rather than just promoting your own individual initiatives. And I am proud that listening to children and parents has been at the heart of our work. It has been their advice which has led us to this ambitious plan of action today.

“Now the onus is on the people in this room and the organisations you are a part of. We have been working together for many months, but today is only the beginning. In implementing these plans, you have a chance to show that something special has happened here in the U.K., that the rest of the world can learn from. You have a chance to show what I know you all believe – that technology companies are serious about their social responsibilities. You have a chance to win the trust of today’s generation of parents, and to help them feel confident about the positive experience their children will have online. And, you have the opportunity to help children lead the way with respect and positivity to build the vibrant, exciting future that you all believe in.

“To the children and young people here today, I want you to know that it is this hope for a positive future that has motivated everything we have done. I am always amazed by the savviness and creativity of your generation. I am excited about the world you are going to create and then lead in decades to come. And I hope the action plan we are announcing today can help you, in at least a small way, to embrace technology with confidence and optimism.”

As much as I want William, Kate, and Harry to express deeply personal reasons why they care so much about their mental health and anti-cyberbullying campaigns for my own selfish reasons (I want to have some sort of emotional connection to their involvement with these topics because I have suffered with this stuff myself), I think I need to let it go and accept that they either don’t have any personal experience with this stuff or they aren’t willing to share it publicly. Maybe William’s pilot experience really is the only reason he cares so much about these topics – in which case, that’s fine; not everyone needs a deeply emotional connection to a cause in order to care about it. Or maybe he just doesn’t feel comfortable sharing his personal experiences with the world – in which case, that’s fine; no one should feel obligated to share something they are uncomfortable sharing.

William also invited campaigners Lucy Alexander (who lost her son, Felix, to suicide) and Chloe Hine (who attempted suicide after experiencing cyberbullying) – who were also involved with the Taskforce – to Kensington Palace to hear about how cyberbullying has affected their lives. What Lucy and Chole shared is so relatable, and I wish we could have heard more from them. This from Lucy is spot on: “If you are in a negative space, that’s all you can see, and you look for the negativity”.

As part of the Taskforce’s rollout of their new plan of action, they launched a new anti-bullying campaign: Stop, Speak, Support. So now we know why the Royal Foundation trademarked the hashtag #StopSpeakSupport

They also created this video outlining the steps to take if one sees bullying online. I’d love to know what actual young people think of this video: is this helpful, is this fun and engaging, is this cool (or whatever word young people are saying these days)?

Maybe it’s because I’m a bit too old for the demo the campaign is going for, but I think the video’s delivery method is trying too hard and is therefore not cool. Having said that, the message is a good one, and the three tips are helpful. And if the video does engage and connect with young people, that’s all that really matters since that’s what the campaign’s goal is.