Kate Middleton visited the Hornsey Road Children’s Centre yesterday, November 14, to see the work that they do, as well as the work of Family Action, of which The Queen is patron. This was a makeup engagement for the one Kate canceled last minute the day KP announced her third pregnancy.

Kate arrived at the Centre and spoke to families who have benefited from the Centre’s support while the children participated in art class. Kate also spoke to representatives from Family Action about their nationwide perinatal mental health services.

Family Action works with over 45,000 families through over 135 community-based services to provide practical, emotional, and financial support to those who are experiencing poverty, disadvantage, and social isolation.

Kate got on the floor at one point (which I love) to speak to the children, but one little boy was not feeling it.

Kate received flowers from a little girl named Nevaeh as she made her departure. 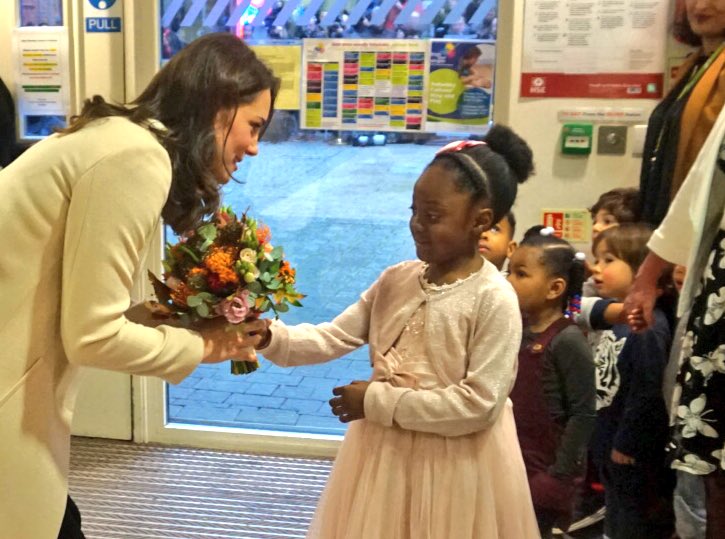 There are no direct quotes from Kate, but several people she spoke to spoke about her to the press. Kate spoke with one man, who is raising his daughter alone, about how men, and William in particular, can struggle with adjusting to fatherhood.

“Billy, 39, from Chatham spoke to [Kate] about adjusting to his new role as dad to seven-month-old Violet. He said afterwards: ‘She was saying William was sort of similar, I just wanted to let her know how Family Action have been there for me and I think they need more support.’ He added he suffered from severe depression but did not want his daughter taken into care. ‘I’ve managed to turn myself around. I’m a sole carer,’ he said. ‘I’ve been doing it since day one, I fed her her first bottle.’

“Volunteer worker Maggie Sandy, said about Kate: ‘We just felt that she genuinely was interested. And it’s so good because it really raises the profile of perinatal mental health. We always say that this goes across social class, we reach all sorts of parents and it is actually to do with being a parent and she can relate to that.’ When asked about Kate’s comments about William, she added about dads: ‘We do offer support to dads. I think it’s so important because dad’s sometimes get left out in the mix after the birth of a baby and they sometimes get sidelined. She seems genuinely very interested.'”

Kate also spoke about George, citing his love of helicopters.

While accepting the posy before leaving, Kate mentioned that Charlotte’s favorite color is pink:

“‘She asked me what my favourite colour is,’ said Nevaeh, who wore a baby pink party dress to present the Duchess with bouquet of flowers. I said it was pink and she said that’s Charlotte’s favourite colour too.'”

I wasn’t a fan of this outfit the first time Kate wore it because I thought it looked too twee at the time, and I’m still not a fan of the coat or dress. But I do like it when Kate wears lower-heeled boots.