I wrote this Royal Rewind almost a year ago and never found a good chance to post it, and seeing as Diana Mania has run amok this month, I thought now was as good a time as any. Here’s a look back at the wedding of Prince Charles and Lady Diana Spencer at St. Paul’s Cathedral on Wednesday, July 29, 1981. 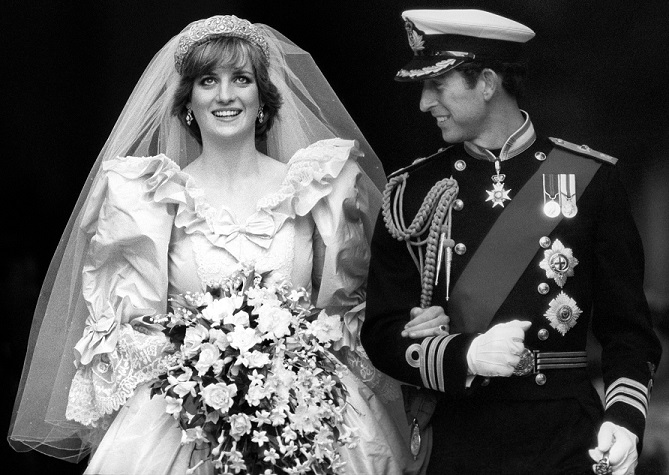 After dating for about six months, Prince Charles and Lady Diana got engaged in February 1981, and Diana chose an 18 carat ring, with a 12 carat oval blue Ceylon sapphire surrounded by 14 diamonds set in white gold, from the Garrard catalogue as her engagement ring.

The then-32-year-old Charles and then-20-year-old Diana married on July 29, 1981 at St. Paul’s Cathedral in London in front of 3,500 guests (with an estimated 750 million people watching on television). The traditional Church of England wedding service was presided over by the Most Reverend Robert Runcie, Archbishop of Canterbury, and the Very Reverend Alan Webster, Dean of St. Paul’s Cathedral.

I’m including this second video of arrivals because it shows off Diana’s tiara as she walks down the aisle. Diana starts walking down the aisle at 2:05.

Here is a video of the vow exchange where Diana messed up Charles’ name – saying “Philip Charles” instead of “Charles Philip”. Diana says Charles’ name incorrectly at 2:05.

The couple left the cathedral and took a carriage procession through the streets of London back to Buckingham Palace past two million spectators, 4,000 police, and 2,201 military officers.

The bride, groom, and families made an appearance on the balcony of Buckingham Palace where Charles leaned in and kissed Diana – which delighted the crowd and started a tradition of the bride and groom kissing on the balcony.

Diana chose a David and Elizabeth Emanuel-designed ivory silk taffeta and antique lace ballgown with a 25 foot train. The gown was decorated with hand embroidery, sequins, and 10,000 pearls, with a lace trim that was antique hand-made Carrickmacross lace which had belonged to Queen Mary.

The dress was so poofy that Diana and her father, John Spencer, cold barely both fit into the Glass Carriage Diana took from Clarence House to the cathedral, which resulted in the dress wrinkling badly in transport. Plus Diana spilled perfume down the front of the dress.

Diana wore the Spencer Tiara, borrowed from her father, for her wedding day. The tiara features stylized tulips, star-shaped flowers, and scrolling foliage and was created from various pieces commissioned from the late-19th century to the 1930s. The tiara sat on top of the blusher – which Diana kept covering her face during the ceremony and was cut off while she and Charles were signing the register – and sparkled like mad while she was walking down the aisle.

Among the wedding guests were foreign royals including (but not limited to): King Baudouin and Queen Fabiola of Belgium; Queen Margrethe and Prince Henrik of Denmark; King Constantine of Greece; Princess Gina and Prince Franz Josef of Liechtenstein; Grand Duke Jean and Grand Duchess Josephine-Charlotte of Luxembourg; Princess Grace and Prince Albert of Monaco; Queen Beatrix and Prince Claus of the Netherlands; King Olav, Crown Prince Harald, and Crown Princess Sonja of Norway; and King Carl XVI Gustav and Queen Silvia of Sweden.

The couple had a total of 27 wedding cakes at their wedding breakfast reception at Buckingham Palace. The official wedding cake was a five-tiered affair made by David Avery, head baker at the Royal Naval cooking school.

251 thoughts on “Royal Rewind: The Wedding of Prince Charles and Lady Diana Spencer”