King Felipe and Queen Letizia kicked off Day 1 of their State Visit to the UK today, June 12, with the official greeting by Queen Elizabeth at Horse Guards Parade before joining the royals for lunch. I am splitting Day 1 coverage up into two posts. This post is about the day events, and the evening banquet will be covered in a separate post. 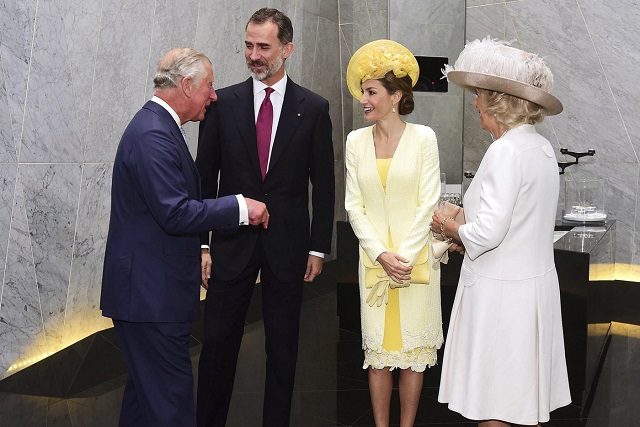 Felipe and Letizia’s day started at their hotel where Prince Charles and Camilla, The Duchess of Cornwall, greeted them before joining them on a car ride to Horse Guards Parade. There was quite the awkward moment during because they hadn’t coordinated their greetings and they couldn’t decide on handshakes or cheek kisses and which cheek to kiss.

When Felipe and Letizia arrived at Horse Guards Parade, they were officially welcomed by HM and Prince Philip. There was a military display and then Felipe and Philip inspected the Guard of Honour.

The royals left Horse Guards Parade in a Carriage Procession to Buckingham Palace.

For this part of the day, Letizia wore something we rarely see her in: a hat. She chose a yellow Maria Nieto hat with flower details, paired with a two-tone yellow Felipe Varela outfit. The dress features a hem of guipure lace, and the coat is summer tweed with the same trim. She paired the outfit with a new yellow flap clutch from Magrit, and nude patent Prada Pointy Toe Pumps. The pearl drop earrings Letizia wore belong to her mother-in-law, Queen Sofia.

QEII wore a magenta coat and hat and the Queen Mother’s Shell Brooch. 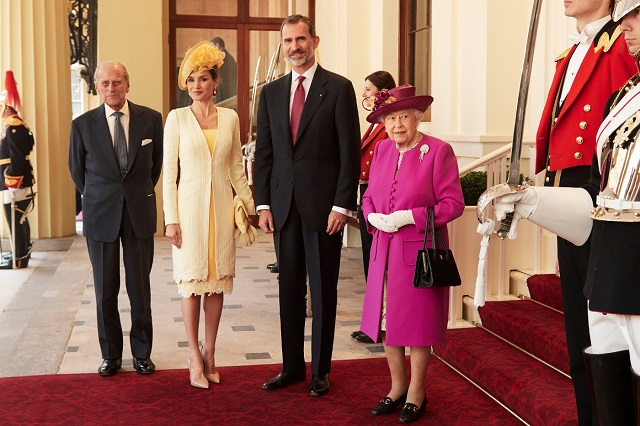 HM hosted a private lunch at Buckingham Palace after which the royal party viewed artwork and gifts from previous Spanish state visits. 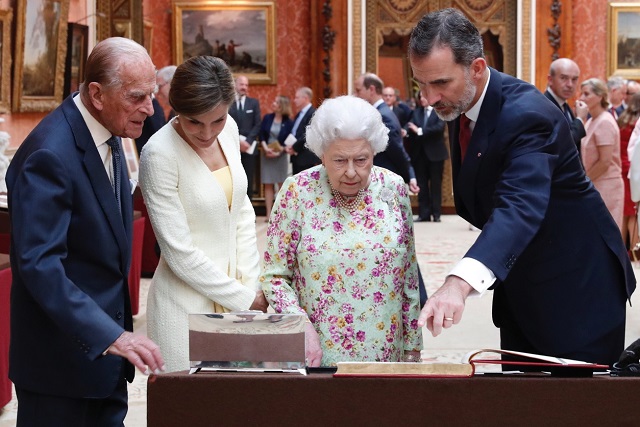 Other British royals were also in attendance at the lunch, including Charles, Camilla, Prince William, Prince Edward, and Sophie, The Countess of Wessex, among others.

After the lunch, Felipe and Letizia joined Charles and Camilla for tea at Clarence House. 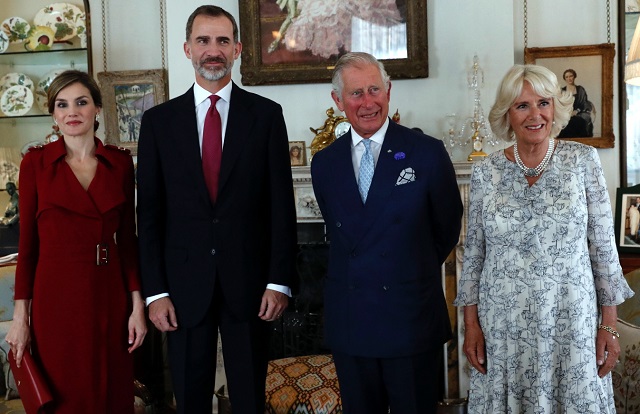 After the tea, Felipe and Letizia headed over to Parliament where Felipe gave a speech.

Here are some additional photos.