Prince William and Kate Middleton made their very first appearance with the Queen and other members of the British Royal Family for Easter service at St. George’s Chapel at Windsor Castle yesterday, April 16. I’m also including the Spanish royals attending Easter Mass.

I thought this coat was boring in Canada, but it’s even more boring without the brooch. Too bad Kate didn’t opt for more colorful accessories – since the coat is so boring it could really stand up to colorful, eclectic accessories.

Kate curtsied and William bowed his head when HM arrived at the church, meaning it was the first time either had seen HM that day. Neither Beatrice nor Eugenie are curtsying here.

Autumn Phillips wore a pretty blue coat and black accessories, while Princess Eugenie wore an ill-fitting trench with a pink flower on her hat, and Princess Beatrice wore shades of purple. Prince Andrew and Peter Phillips were there also, but I’m not including photos of them.

Sophie, Countess of Wessex wore a pink coat which is too baggy for my taste, and Lady Louise Windsor wore a navy skirt suit. Prince Edward and James, Viscount Severn were there as well.

Over in Spain, the Spanish royals came out for Easter Mass at the Cathedral of Palma de Mallorca. King Felipe, Queen Letizia, Princess Leonor, Princess Sofia, and Queen Sofia all came out and posed for photos. I love that Leti is wearing pants. 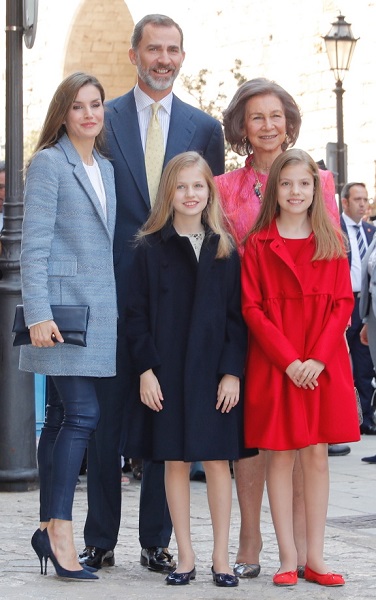 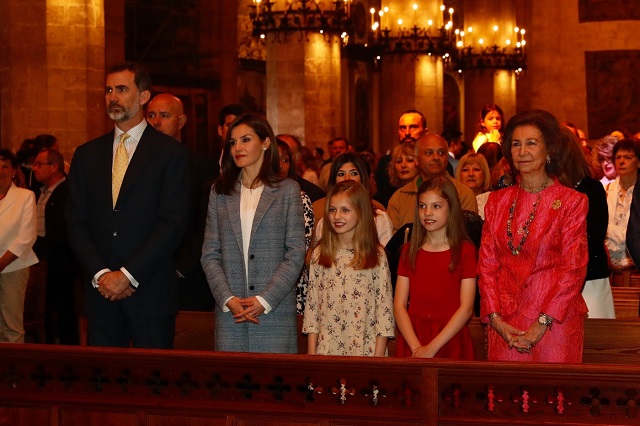 Here are a few more photos of the British royals, including Princess Anne and a photo of Kate’s updo with a hairnet.

269 thoughts on “William & Kate join the Queen for Easter service”