Crown Princess Victoria at Baltic Sea Future: ‘man is a danger to the sea’

Yesterday, March 6, Crown Princess Victoria made her first engagement of the year when she gave the opening address at the Baltic Sea Future conference. 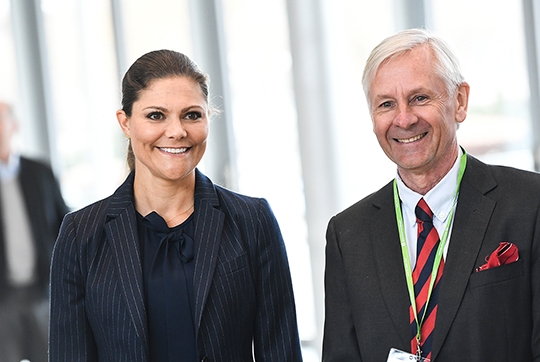 Victoria, as ambassador for the UN’s Sustainable Development Goals of Agenda 2030, gave the opening address, and spoke about the danger the Baltic Sea is in and how only humans can undo the damage that we’ve done to it.

“A while ago, I came across an old poem. It was written in 1858, by a young man called Oscar Fredrik. He was also known by another name: Prince Oscar of Sweden, and later, King Oscar II. He was my father’s great-great grandfather. And the poem was called Östersjön – the Baltic. I would like to read you the first verse:

“Oh distant blue sea, that for thousands of years
Has broken against northern shores,
Crashing free every spring,
To claim freedom that ever is yours;
I sing you my song, for I long to be there,
As the waves break onto the rocks.

“Almost 160 years have passed since the poem was written. But my ancestor’s words still ring true as they describe the beauty and the power of the Baltic. But as we all know, much has changed. That is why we are here today. And that is also why I, in my role as advocate for the UN Sustainable Development Goals, have chosen to focus on issues such as water and health. The Baltic has a special place in my heart. It is an integral part of my heritage.

“One underlying theme in Prince Oscar’s poem is the dangers of the sea – the threat it poses to man. He writes of a sailor fighting for his life against the raging dark waters. Today, the tables have turned. Now, man is a danger to the sea. Filling it with plastic, poisoning the fish and suffocating the sea beds.

“The facts are only too well known: Every year forty tonnes of microplastics from personal care products are released out into the sea. In Sweden, children and women of childbearing age are advised to limit their consumption of fatty Baltic Sea fish to no more than two or three times a year. The Baltic Sea is home to seven of the world’s ten largest marine dead zones. All the while, coastal erosion is eating away at the shores along the Baltic, the damage being speeded up by the effects of climate change.

“Throughout history, the Baltic Sea has often been a battleground. Nations have gone to war against each other. Today, we are fighting a different kind of battle. Countries along the Baltic shores are joining forces, working together across the sea that unites us. This congress is an excellent example of this, with decision-makers, researchers, entrepreneurs and investors coming together to find new ways forward for a sustainable development in the Baltic region.

“There is no doubt that humans and our way of life are a hazard to the Baltic Sea. But we are also the ones who are capable of saving it: with commitment, collaboration and innovation.

“I would like to thank you all for being here and for generously sharing your valuable knowledge and best practices. I want to urge you, every one in this room, to please make the most of this opportunity. Use your time wisely. Because when it comes to the future of the Baltic Sea, there is literally no time to be wasted.

“For many generations, we have depended on the sea – for our livelihood and for our survival. Now, the survival of the sea depends on us. This is critical. Not only to our environment, but also to our economic and social development. There is a win-win potential in this: A healthy sea allows for new jobs to be created, for example within tourism. And with a growing global demand for innovative environmental solutions, there are great opportunities to export our knowledge and expertise. So let us take our responsibility – and grasp these opportunities for blue growth – by taking action.”

I think this is a great opening address. I will admit my own lack of knowledge: I had no idea the Baltic Sea was in such a bad spot. It sometimes seems like following the royals is frivolous or a waste of time, but through following the various royals I have been made aware of so many things I had never known before.

As for fashion, Victoria looked professional in a nice blue pinstriped suit with her hair in a ponytail. Victoria’s shoes are the Saint Laurent “Paris” pump in blue ($595), and her bag is the Dagmar “Taylor Bag” in black ($1,029).

37 thoughts on “Crown Princess Victoria at Baltic Sea Future: ‘man is a danger to the sea’”