Camilla at WOW reception: ‘it’s more important than ever for women to unite’

Camilla Duchess of Cornwall
March 9, 2017March 8, 2017 by katemiddletonreview43 Comments on Camilla at WOW reception: ‘it’s more important than ever for women to unite’

Camilla, Duchess of Cornwall marked International Women’s Day yesterday, March 8, with a reception at Buckingham Palace to celebrate the Women of the World Festival, of which Camilla is President. 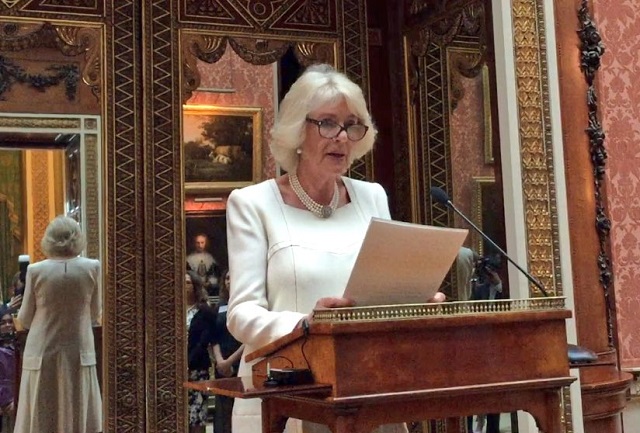 The Women of the World festival – which runs all week at the Southbank Centre in London – champions gender equality, celebrates the achievements of women and girls everywhere, and examines the obstacles that keep them from fulfilling their potential. It was launched in 2011 as a major global festival that celebrates women and girls and looks at the obstacles they face, where hundreds of women’s stories are shared, feelings vented, fun had, minds influenced, and hearts expanded.

Camilla became President of the Women of the World Festival in 2015, after supporting it since it’s launch in 2011.

The reception was attended by women such as Gillian Anderson, HE Afra Al Basti, and Cherie Blair. Camilla gave a speech at the event (the ellipses are theirs; I did not edit the transcript).

“I’m delighted to welcome you all to Buckingham Palace on International Women’s Day, to celebrate the inspiration of the indomitable Jude Kelly. As the founder of WoW, she has produced bigger and better Festivals every year at the South Bank Centre in London… and as its proud President, I feel honoured to have been part of it since its conception.

“Now, in these turbulent times, I believe that it’s more important than ever for women of all ages, and from every walk of life, to unite. WoW provides that place… a place where hard-hitting issues that deeply affect women’s lives can be openly discussed, and where obstacles that block their paths can be faced together; it gives them a chance to talk about different solutions to life’s challenges and above all, it celebrates and supports the achievements of remarkable women and girls worldwide.

“WoW is too big to be limited to its London home: twenty other Festivals are spreading the word – from Bradford to Baltimore, from Cardiff to Karachi – with seven more in the pipeline. I myself was in Sydney to launch WoW Australia in 2012 and in Washington for the 2015 Festival, and I hope to be part of many more.

“Although WoW is growing across five continents, it has not lost its link with the everyday lives of women, and what matters to them. Before every Festival, wherever it may be, there are ‘think-ins’ open to everyone. Some of the events to emerge from the Bradford ‘think-ins’ will include a discussion of ‘Women crossing borders’, a session on mentoring, and an Arabic singing workshop: something for everybody living in this diverse community…

“At the South Bank Festival this week, as well as some amazing drama, poetry and music, you’ll find spellbinding speakers and a huge breadth of topics – such as the plight of Yazidi women and girls and who were kidnapped in 2014 by ISIS; the difficult path to justice for victims of rape and sexual abuse and the experiences of international women of courage who stand for human rights, and justice in war and conflict zones – to name but a few.

“I know that the events of the 7th WoW Festival at the South Bank Centre will fizz with energy, to surprise and enthral those taking part. WoW has gained momentum and stature with every year and I have no hesitation declaring it unstoppable….”

“As women’s progress accelerates globally we are seeing backlash and resistance surfacing, with basic rights under threat and a frightening increase in violence against women. In using all our creativity to support each other, we can find the courage to move beyond our own circles and learn how other women face challenges different from our own. WOW celebrates and learns from diversity of all kinds – and welcomes everyone to be part of this global movement for change.”

43 thoughts on “Camilla at WOW reception: ‘it’s more important than ever for women to unite’”