Sofia in Amethysts, Madeleine in Aquamarines for Canada State Visit

As previewed, Princess Madeleine stepped in for the absent Crown Princess Victoria on Day 1 of the Canada State Visit to Sweden. Princess Sofia was also in attendance and wore a new-to-her tiara for the occasion: the Amethyst Tiara. My favorite tiara! 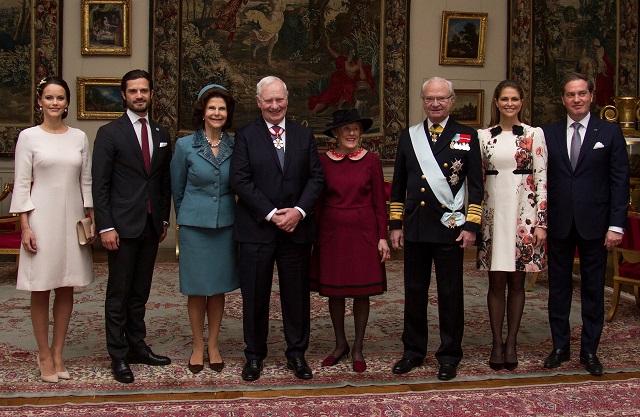 King Carl XVI Gustaf and Queen Silvia welcomed Governor General of Canada David Johnston and his wife, Sharon Johnston, at the inner courtyard of the Royal Palace for the official welcome ceremony. The national anthems of both countries played before the King and GG inspected the royal guard.

They then moved inside for a gift exchange and lunch, which was also attended by Madeleine, Chris O’Neill, Prince Carl Philip, and Sofia.

Sofia wore an Agnona “Bell-Sleeve Shift Dress” (which originally cost $1,890 before being discounted to $472). She carried a Salvatore Ferragamo “Bow Saffiano Leather Shoulder Bag” in pink ($689). Sofia’s dress is nice, although nothing special. But I do like the gold leaf headpiece she’s sporting. 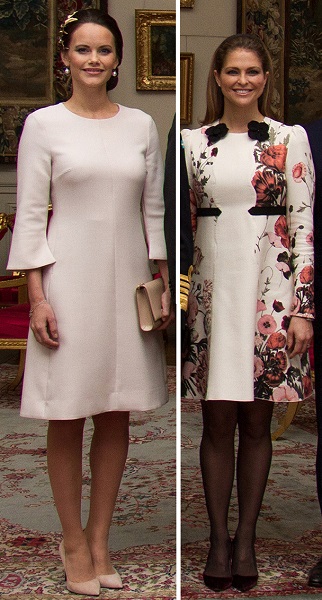 In the evening, the royals hosted a State Banquet for the Governor General and his wife at the Royal Palace. Guests were welcomed in the White Sea, and the dinner was then held in Karl XI’s Gallery. 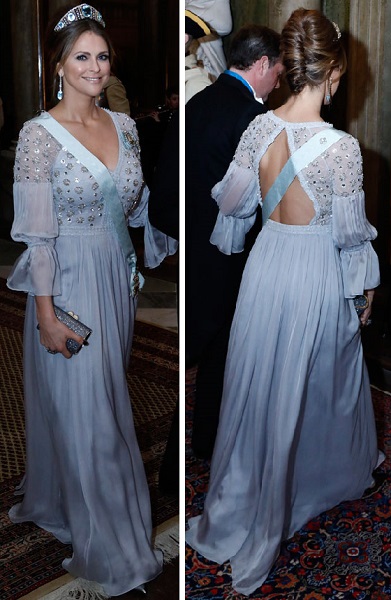 Madeleine wore a new Temperley London “Crossbone Lattice Dress” (which originally retailed for $3,900). The dress features an a-line silhouette with a deep v-neckline and an open back, crystal embellishment on the bodice, and gathered sleeves.

Madeleine wore the Swedish Aquamarine Kokoshnik Tiara, which she’s worn a few times now, along with gorgeous aquamarine earrings, the Order of the Seraphim and Portrait of the King. I love this tiara on Maddie, so I’m glad that she’s continued to wear it. 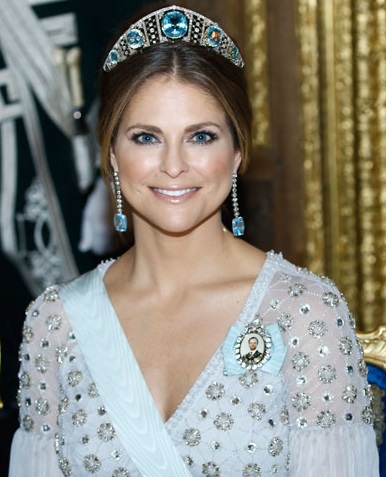 Sofia wore my all-time favorite tiara, the Swedish Amethyst Tiara. She also wore the diamond earrings she wore on her wedding day, a little brooch over her Order of the Seraphim, and the Portrait of the King. I’m so happy that Sofia is debuting more new-to-her tiaras, since I dislike her wedding tiara. I love this tiara and think it looks great on Sofia. 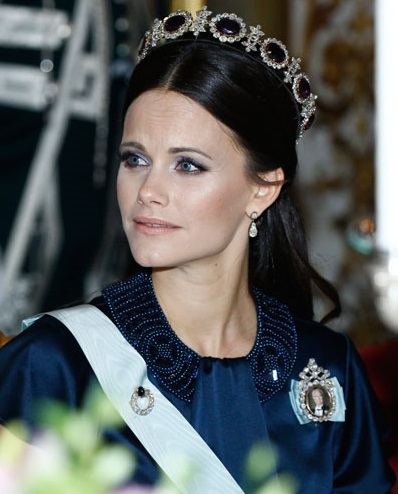 Sofia’s blue gown, on the other hand, is just kind of meh. UPDATE: Sofia’s gown is by Lars Wallin. This designer has previously dresses both Victoria and Madeleine, but this is the first time Sofia is wearing one of his designs. 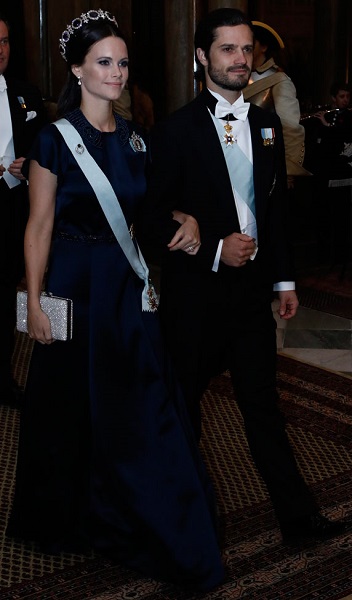 Silvia went normal Silvia. She wore a rather pretty blue gown which I could have sworn she wore before, but I can’t remember when and I can’t find it in my archives. She topped her head with Queen Sophia’s Nine Prong Tiara, and wore a diamond necklace, earrings, and brooch. She also wore the Order of the Seraphim and the Portrait of the King.

Here is a short video of the royals walking into the banquet.

95 thoughts on “Sofia in Amethysts, Madeleine in Aquamarines for Canada State Visit”