This year will mark the 20th anniversary of the death of Diana, Princess of Wales, and in honor of her memory Prince William and Prince Harry have commissioned a statue of their late mother to be erected on the grounds of Kensington Palace.

William and Harry have convened a committee to raise funds for the statue, which will be paid for privately. They have yet to pick a sculptor and have no official date for an unveiling, although they hope to get it done by the end on 2017.

“A statue of Diana, Princess of Wales will be erected in the grounds of Kensington Palace at the request of her sons, The Duke of Cambridge and Prince Harry.

“The Princes have convened a committee to commission and privately raise funds for the creation of the statue. This committee will advise on the selection of the sculptor and will work with Historic Royal Palaces on the statue’s installation in the public gardens at Kensington Palace.

“The Duke of Cambridge and Prince Harry said:

“‘It has been twenty years since our mother’s death and the time is right to recognise her positive impact in the UK and around the world with a permanent statue. Our mother touched so many lives. We hope the statue will help all those who visit Kensington Palace to reflect on her life and her legacy.’

“While the sculpting of the statue will begin soon, it is not currently possible to advise when it will be unveiled. It is hoped that this will occur before the end of 2017.

“Further announcements on the statue’s sculptor and design will be made in due course.”

Hrm… I hate to be a downer, but more than anything I just have questions about this. How much does a statue cost, and don’t William and Harry have enough money to fund this themselves if they really wanted a statue? Why do they have to do outside fundraising? Even if they spent a million on the statue they could still afford it themselves.

Also, is the time really right to recognize Diana? I know there are many people who still love, admire, and respect her and her legacy, but I kind of think the time to recognize her has past a bit. Like, they should have done this at the 5 or 10 year mark, not the 20 year mark. I could just be totally wrong and not reading the mood correctly at all, but growing up none of the people I knew ever mentioned Diana or were fans of hers (although there was one girl who had a crush on William and Harry). Plus, an entire generation has been born and grew up without her in the world.

Another thing: Is a statue really the best way to recognize Diana’s positive impact in the UK and around the world and honor her life and her legacy? Whenever William visits The Diana Award the press makes a big deal of the fact that it is the only charity with Diana’s name still attached. Wouldn’t creating a charity with Diana’s name in the title that benefits the causes she cared about, or create a scholarship with her name in the title, be a better way to honor her impact, life, and legacy?

A statue is nice, but I think a better use of fundraising would have been to create a scholarship or charity in Diana’s name and then have William and Harry pay for the statue themselves.

I don’t want to be a downer because I know that there are people who will be excited for this, and I don’t want to take that away from anyone, it’s just that, for me personally, I’m having a hard time being excited. 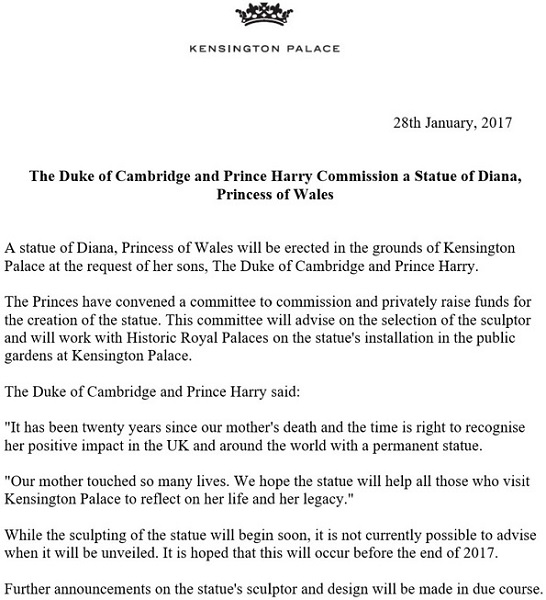 Because this gives me an excuse to post photos of Diana, here you go: