Crown Princess Victoria and Prince Daniel took a trip to Rome and Milan from December 15-17 with Minister Anna Ekström to promote health and cultural issues and to promote Swedish business.

The first stop of the day on December 15 was a meeting with the President of the Chamber of Deputies of Italy Laura Boldrini. During the meeting, they discussed the current political climate in Italy, as well as environmental, health, and gender issues.

After the meeting, Boldrini showed Victoria and Daniel around the Italian Parliament Chamber of Deputies, and specifically La Sala delle donne (women’s hall).

The second stop of the day was a visit to The Birgitta Sisters in Rome at the convent Church of Santa Brigida.

Birgitta Birgersdotter was a Swedish woman, born around 1303 in Uppland, who traveled to Rome in 1349 to seek the Pope’s approval to found a monastery. In 1370, Pope Urban V granted Birgitta approval to found two monasteries in Vadstena: one for women and one for men. After her death in 1373, her former home was converted into a monastery.

In 1391, Birgitta was canonized by Pope Boniface IX. And in 1999, Pope John Paul II appointed her patron saint of Europe.

Victoria and Daniel spoke with Mother Tekla and Mother Fabia before signing the guest registry.

The third stop of the day was a visit to AS Roma at the St. Peter’s Pontifical Oratory where General Manager Mauro Baldissoni showed them the project “Calcio Insieme” (Football Together) where children with disabilities are given the opportunity to high-quality football training.

In the evening, Victoria and Daniel attended a reception at the Swedish residence hosted by Swedish Ambassador Robert Rydberg in Italy.

For the day events, Victoria wore a new Filippa K dress, Acne Studios pumps, and Kreuger Jewellery poppy earrings. Victoria continued her recent trend of wearing her hair in a ponytail instead of a bun. 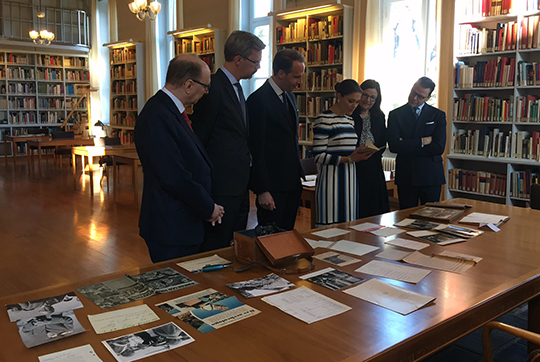 The second day of the visit saw Victoria and Daniel visit the Swedish Institute in Rome where they visited the library and viewed Gustav VI Adolf’s dig diary.

The Institute was founded in 1926 by Crown Prince Gustaf (VI) Adolf to promote the ancient science, and serve the humanistic research and artistic interests. The Institute is the base for the Swedish archaeological excavations and scientific activities in Italy, and has a research library with about 60,000 volumes.

Day 2 continued at the Food and Agriculture Organization Headquarters in Rome for a meeting with FAO Director-General José Graziano da Silva. After the meeting, Victoria took part in the seminar “Step it up together with rural women to end hunger and poverty”, where she gave a speech.

For space, I’ve cut her speech down a tad. She said in part:

“For many of us, this is a special season. As the year comes to an end, people around the world prepare to celebrate Christmas and other festivities with their families and friends. It is a time of joy and expectations. But also a time when the inequalities of our world become especially clear. While some throw away edible food just to make room in the cupboard, others struggle to feed their families. Some get sick from eating too much. Others from starving. This is the food and health paradox of our time.

“The world population is growing rapidly. Five years ago, the world welcomed its seven billionth citizen. By 2050, we are expected to be more than nine billion people. First and foremost: This is good news! Thanks to improved health care and affordable vaccines, more people get to enjoy long and healthy lives. More mothers and fathers get to see their children grow up. However, a growing population also places greater burdens on our ecosystems. While the number of mouths to feed is growing, the number of planets that we have to our disposal stays the same. We only have this one, where resources like land and clean water are limited, and where climate change is making the future very difficult to predict.

“In the next 30 years, we are facing a 50 percent increase in demand for protein. Producing that much more meat will not be an option. We will have to look to other sources of protein. The United Nations has declared 2016 the International Year of Pulses, such as dry beans, dry peas, and lentils. This kind of crop, with strong nutritional benefits, is a critical part of sustainable food production.

“I would also like to underline the importance of sustainable seafood. Fish is already the largest source of animal protein in the world. Half of it comes from aquaculture, the other half is ocean harvested. But while the global population is growing, the growth rate of fish production is on decline. Almost 60 percent of all stocks are already fully fished and 30 percent are even overfished. So the situation is urgent. All fish, whether farmed or wild-caught, must be produced in a sustainable way, the alternative is not “un-sustainable” fish, – it is in fact no fish at all. In essence, life below water and life on land presents us with the same challenges and responsibilities: increasing productivity while strengthening sustainability. Because we have no other option! […]

“To end hunger and poverty, we also need to work toward gender equality. Women play an important role as smallholder farmers and fisherfolks. Their participation is key to rural and economic development. Still, women often have limited possibilities to own land or to invest in new technical solutions. If female farmers were given access to the same resources as their male counterparts, food production could be increased by 20 to 30 percent. This would mean saving about 100 to 150 million people from living in hunger! In building a sustainable future, rural women represent a resource that we simply cannot afford to overlook.”

For this part of Day 2, Victoria wore a Dolce & Gabbana dress which she previously wore to King Carl XVI Gustaf’s 70th birthday celebrations.

The rest of Day 2 was spent in Milan, where they visited the concept store Frip, which sells Swedish fashion in Italy.

The day ended with a reception at the Swedish-Italian Chamber of Commerce Assosvezia. 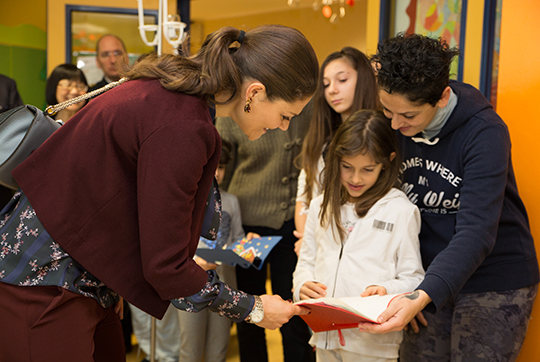 Day 3 of the visit was spent entirely in Milan. They first visited San Raffaele Hospital, and also met with representatives from the Swedish company Getinge, which supplies surgical equipment to the hospital.

The Crown Princess Couple then visited Volvo Group to take part of the company’s work on sustainable transport. Victoria was given gifts for Estelle and Oscar.

The final stop for the couple was a visit to Björk Swedish Brasseri which serves Swedish and Nordic food in Italy.

Victoria and Daniel brought Prince Oscar along with them to Italy for their three day trip.