Royal Round Up: Princess Sofia

Here’s a catch up post all about Princess Sofia with a splash of Prince Carl Philip.

Princess Sofia, on September 27, attended the opening of the ‘Porphyry: The Royal Stone’ exhibition at Sven-Harry’s Art Museum.

The exhibit features art made from porphyry – a shiny, almost black, hard rock – mined in Älvdalen from the late 1700s and the 1800s. Due to the laborious and time-consuming process to mine porphyry, it was expensive, and art made from the material was commissioned by only the elite members of society, most notably Karl XIV Johan. The exhibit features many items from the Swedish royal collections. ‘Porphyry: The Royal Stone’ runs until November 27.

Sofia gave a speech at the opening, but the transcript is not online. Here’s a short video of it, but it’s in Swedish so I can’t understand what she’s saying.

Sofia gave an interview to Swedish Women’s Weekly while at the exhibit (the interview was in Swedish, I’ve translated it via Google Translate, so excuse the wonky wording in places):

How was the show? “Totally amazing! As I mentioned earlier Alvdalen has a special place in my heart because I am from there and grew up there.”

Due to the royal connection to Älvdalen porphyry, was it fate that there would be a princess from Älvdalen? “Well, maybe that was it, right. No one knows, of course not, but sometimes it feels that way. Maybe it was meant to be.”

How does Sofia feel ahead of the visit to Dalarna on Friday? “It will also be very exciting! We will dedicate a bench that we got during our wedding. It will be very nice.”

Does Sofia long for her home town in Älvdalen? “Yes, you probably always have a homesick for your home district. I know many people here, there are many river valleys are included here on the spot. I feel like I’m in good company.”

How often does Sofia visit Älvdalen? “It’s hard to say … So often I have the opportunity! It’s a place for me to recharge and just be at home. As does anyone who grew up in a place where you do not live in today.”

Will Sofia visit with family and friends on Friday? “Of course, one must take the opportunity!”

Sofia wore a dress from Zara.

On Friday, September 30, Sofia and Prince Carl Philip visited the Hykjeberg nature reserve in Älvdalen. As a wedding gift from Dalarna county, the couple received a stone bench on the nature reserve. They unveiled the bench which is at the top of Hykjeberg at a lookout. 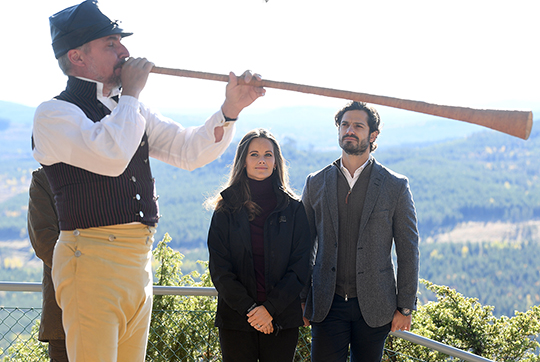 Both Carl Philip and Sofia spoke at the unveiling.

“Princess Sofia and I want to thank you for this nice stone bench. It’s really a generous gift. And it feels good to know that it will be a joy for all who visit this amazing viewpoint, in many years to come. Right here I have been several times with my wife and, more recently, my son. I feel at home here in the wild. If I have a wish it would be that this site will become a place where many children and young people get the chance to discover nature.”

“Excursions in nature was one of the best things I knew during my childhood. I am very grateful to have grown up here and enjoy all that the beautiful Dalarna has to offer. The relationship to nature and Dalarna, I will pass on to our children. We look forward to coming back here for the wedding bench and Hykjeberget many times over.”

Sofia joined Queen Silvia and Crown Princess Victoria at the Global Child Forum meeting on October 11 at the Royal Palace.

I covered this event in detail in the Victoria post yesterday, go here to read.

Sofia previously gave a speech at the Global Child Forum in South Africa in September 2015. 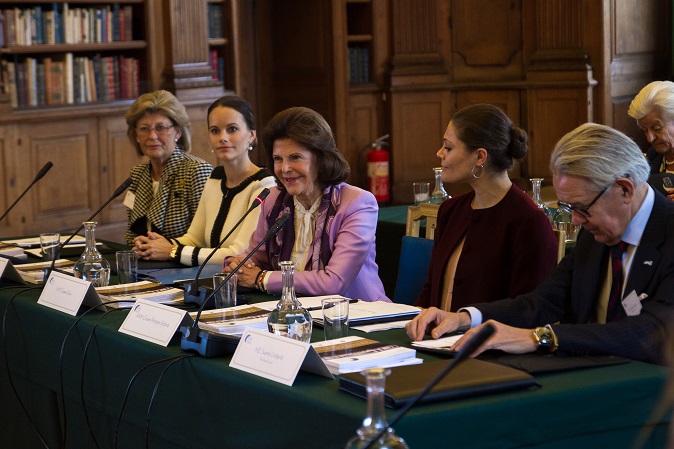 50 thoughts on “Royal Round Up: Princess Sofia”