Crown Princess Victoria gave a speech at the World Water Week 2016 “Building a Resilient Future through Water” meeting on September 1. This is part of her work with Agenda 2030 which she took up earlier this year when she was appointed a Sustainable Development Goals Advocate. 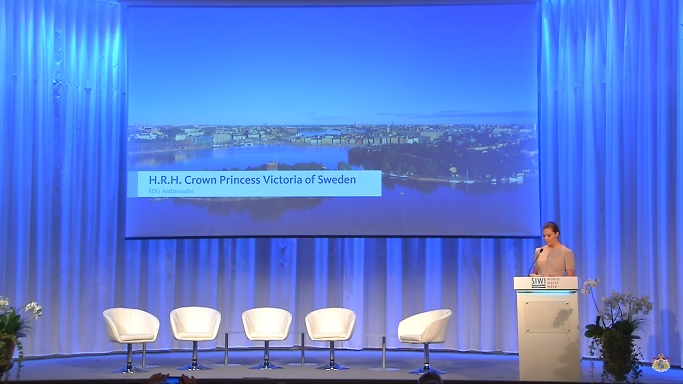 I was going to include this in yesterday’s royal round up, but I like her speech and wanted to quote the whole thing. The speech was given in English:

“Sweden had a warm summer this year. My four-year old daughter has been very keen on swimming. She loves to swim – just like I did when I was a child. And like most parents, I want to say ‘yes’ when my child wants to play in the water. But this summer many parents in Sweden had to say no when their children wanted to jump in the sea. Because the water was not healthy. Instead it was a brownish mess of toxic algal bloom.

“This is just one of many alarming signs that our marine environment is under great stress. A third of the Baltic Sea now has so little oxygen that it is hard or impossible for fish to live and breed. This means that things that we for generations have taken for granted are going to be difficult or even impossible for our children to enjoy. Like taking a swim on a warm summer day. Or being able to eat the fish that they have caught themselves.

“It makes a mother sad to have to say no to her child’s desire to swim. Still, I know, that this is nothing compared to the losses that other mothers are suffering around the world. Like the mother whose child is thirsty – but she has only dirty water to give. Or the mother who can’t work, because fetching water for her family takes up half of her day. Or the mother who can’t let her teenage daughter go to school because there is no proper sanitation.

“Disease. Poverty. Inequality. 650 million people lack access to safe water. 2.3 billion lack access to improved sanitation. 900 children die every day of diarrheal diseases. This is what we are really talking about when we discuss water.

“So, let’s change the perspective – and look ahead: Let’s talk about health. About economic development. And equal opportunities for boys and girls. Because this is what we can achieve, if we make the right decisions about water today.

“I am honoured to have been appointed by the United Nations’ Secretary-General Ban Ki-moon as an Advocate to promote the global sustainable development goals. I am grateful for the opportunities it has brought me to learn more about the challenges that we face about: Poverty; Inequality; And climate change.

“One key insight is that the seventeen global goals are not a list of targets. But rather a network or a system. The only way to achieve one goal is by working on the others as well. It is like a wristwatch: if you lose just one of the cogwheels it will stop. And you are likely to be late. Maybe too late. There is no such thing as spare time. There is, in fact, no time to waste at all.

“I believe Secretary-General Ban Ki-Moon expressed it very well when he said: ‘We are the first generation that can eradicate poverty. And the last that can put an end to climate change.’

“I am proud that Sweden is truly committed to the 2030 Agenda and the global goals. In the government, the civil society, the business sector and academia there is a strong ambition to take the lead. And to lead by example. But: leading is not just about showing the way. It is also about listening About learning from others. And being open to new ideas. And this is why we are here today.

“Looking around this room, I see leading researchers, decision-makers and opinion leaders from all over the world. I see hope. So much knowledge and ability gathered here, under the same roof. We have a lot of work ahead of us. Let this World Water Week give us the energy we need to carry on in order to make great things happen.

“The former Secretary-General of the United Nations, Dag Hammarskjöld, once said: ‘No peace which is not peace for all, no rest until all has been fulfilled.'”

This is a good speech. I like that she included a reference to Princess Estelle, but then moved on to talk about mothers in other parts of the world who are much less fortunate than Victoria. Because if Victoria had only talked about her own situation, she would have seemed very out of touch. I also liked what she said about how in order to achieve all seventeen goals they need to work on all of them together, that they are intertwined.

You can watch a video of her speech below. Victoria is a good public speaker and her English is very good.

Victoria wore a Prada Pink and Green Printed Dress and By Malene Birger Paxilow Pumps in Clay. She carried a white clutch by Abro – the clutch also comes in black and nude. 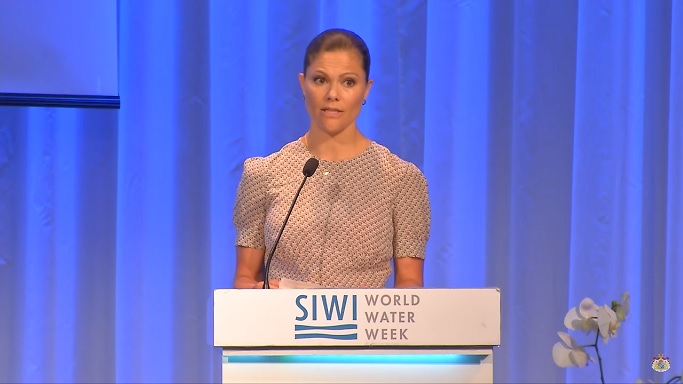