While Sophie, Countess of Wessex has not traveled to Rio to watch the Olympics like some other royals, she is keeping up with how Team GB’s women’s hockey team is doing. Team GB made it into the finals, and Sophie, as Patron of England Hockey, released a video message to wish them luck. 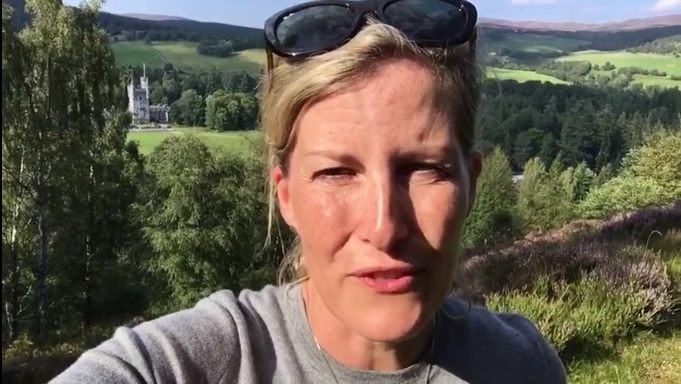 The video was posted on England Hockey’s YouTube channel and appears to have been filmed by Sophie on her phone while at Balmoral – you can see part of Balmoral Castle in the background.

In the video Sophie says:

“Hi girls, well done. Congratulations, you’re in the finals. This is everything that you’ve worked for. It’s fantastic and I’m so proud of you. I’ll be watching tomorrow night. I’m just so sad I can’t be with you, but I’m there in spirit. Good luck, take care. I hope everybody’s okay from last night, and bring it home. Well done.”

Great Britain plays the Netherlands in the Women’s Final today, August 19, at 4PM Eastern US time and 9PM UK time.

The GB women’s team beat Spain 3-1 in the quarterfinals and New Zealand 3-0 in the semifinals to play Netherlands in the finals. The men’s GB hockey team didn’t even make it out of the preliminaries.

I really like that Sophie has been paying attention to Team GB’s Olympic showing and that she cared enough to make this video to congratulate them even though she’s on vacation. I also really like that this video is something she just filmed herself and doesn’t seem scripted.

Sophie previously visited England Hockey at Bisham Abbey National Sports Centre back on April 28 of this year, attended the Eurohockey Championship Finals on August 30, 2015 with Lady Louise, and showed off her own hockey skills at Bisham Abbey National Sports Centre on March 11, 2014. Hopefully Sophie will make some time to visit the Team GB women’s hockey team later this year to congratulate them on their Olympic success.