William, Kate, and Harry join Prince Charles and Camilla for Battle of the Somme centenary

For their second day in France commemorating the 100th anniversary of the Battle of the Somme, yesterday July 1, Prince William, Kate Middleton, and Prince Harry joined Prince Charles and Camilla, Duchess of Cornwall, British Prime Minister (?) David Cameron, and French President Francois Hollande to open the new Thiepval Memorial Museum and honor those who died on July 1, 1916. 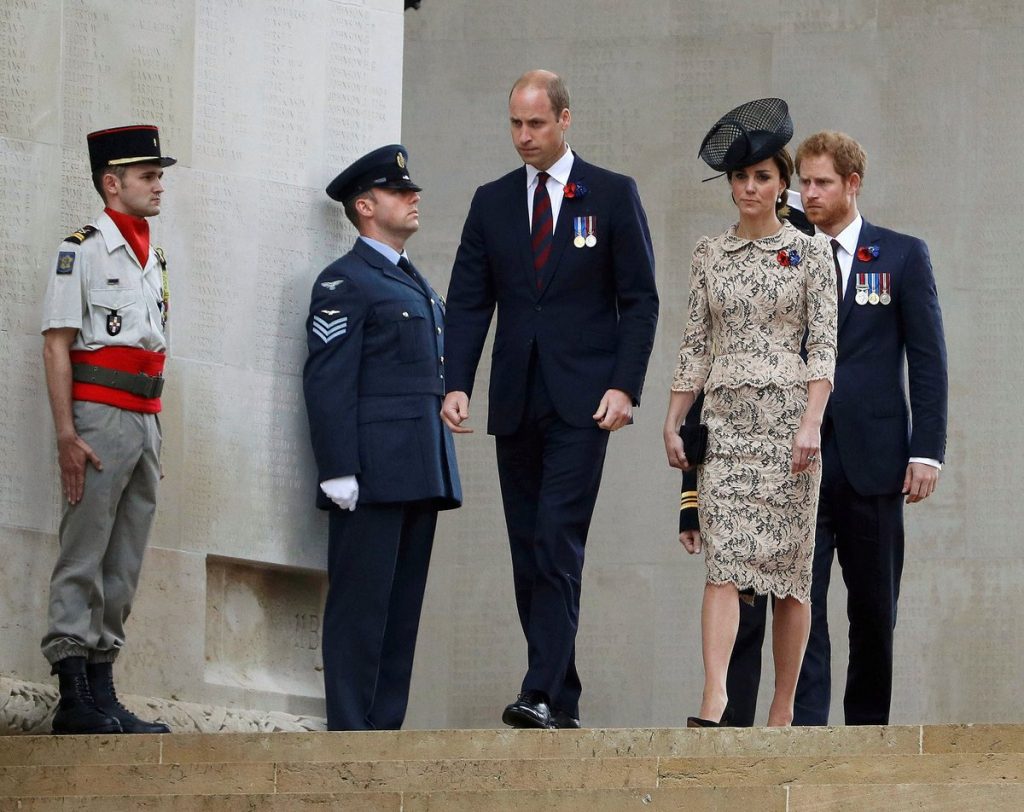 The first event of the day saw William, Kate, and Harry join President Hollande to open the museum.

The visitor center at Thiepval opened on July 1, 2004 through combined efforts of the Somme County Council, the “Thiepval Project” (a charity that raised funds from Great Britain), and support from Europe. The visitor center has educational exhibitions about the First World War and the Battle of the Somme. It also has three computer databases of soldiers who died in the war for those who want to research the soldiers and their lives before the war.

The new museum which the royals and Hollande officially opened actually opened on June 1, 2016 and has new galleries themed on the battles of the Somme and to the memory of the lost soldiers. 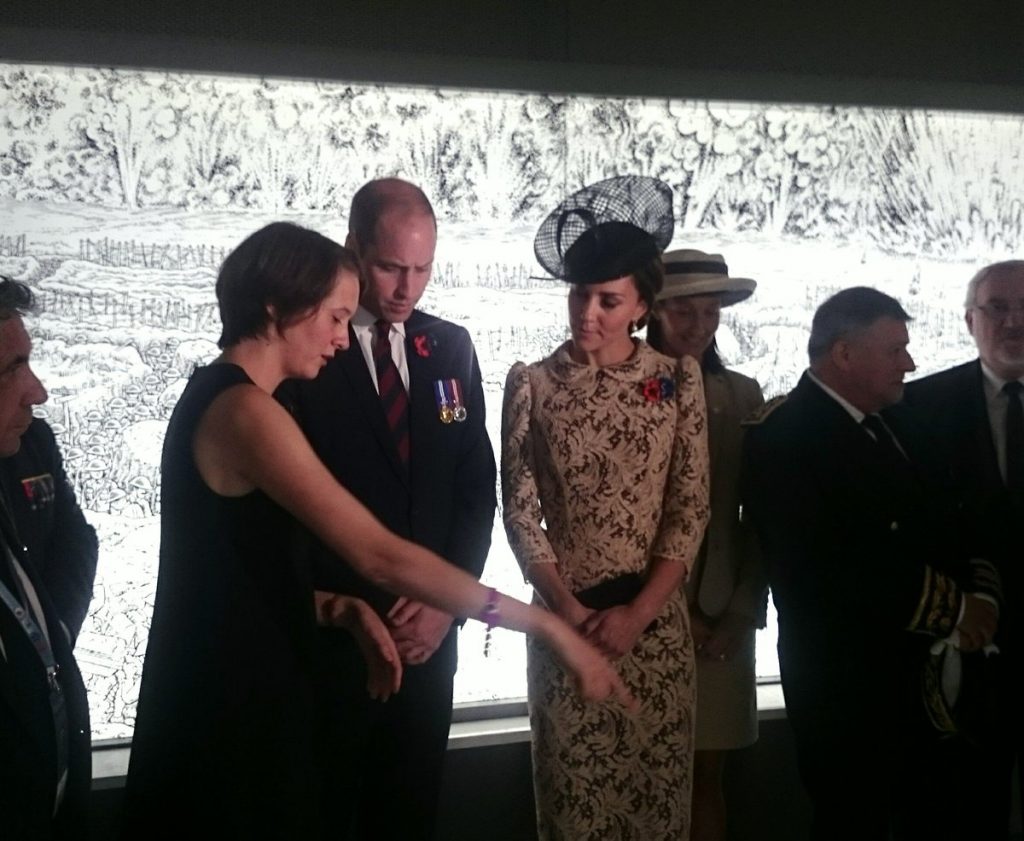 Afterward, the royal trio and Hollande were joined by Charles and Camilla, Cameron, and the Duke and Duchess of Gloucester for a Service of Commemoration at the Thiepval Memorial to the Missing of the Somme which included hundreds of military personnel and 10,000 guests. The service involved hymns, readings, and music reflecting the cultural and military impact of the site to help tell the story of the Somme.

The Prince of Wales and Members of the Royal Family are attending the #Somme100 service at the Thiepval Memorial pic.twitter.com/ywfqTqGIQX

Among others, 600 British and French schoolchildren took part in the ceremony, laying wreaths at the graves of the dead. 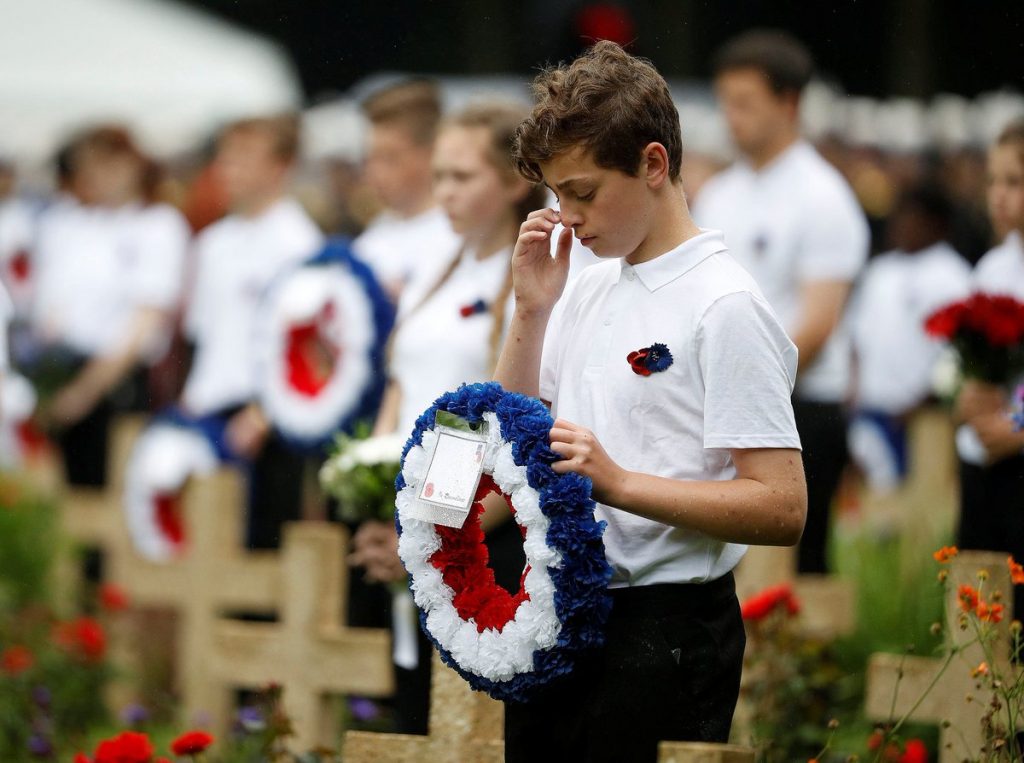 William, Kate, and Harry spoke to the schoolchildren, trying out their French language skills on the kids.

Kamelia el Alelga, 15, said of Kate: “Her French was very good. She asked my age, my name and if we all come from the same school.” They also spoke in English, and Kamelia said of Kate: “She said it was really impressive and emotional. It was amazing to meet her – it was everything.”

Berteel Py, 11, also talked to Kate in French: “She asked me my name and my age and said she was happy to be here.”

Harry apparently isn’t as good at French as Kate, Berteel said of Harry: “He asked me if his French was good or bad. Of course I said it was good, but I didn’t really understand what he was saying to me.” 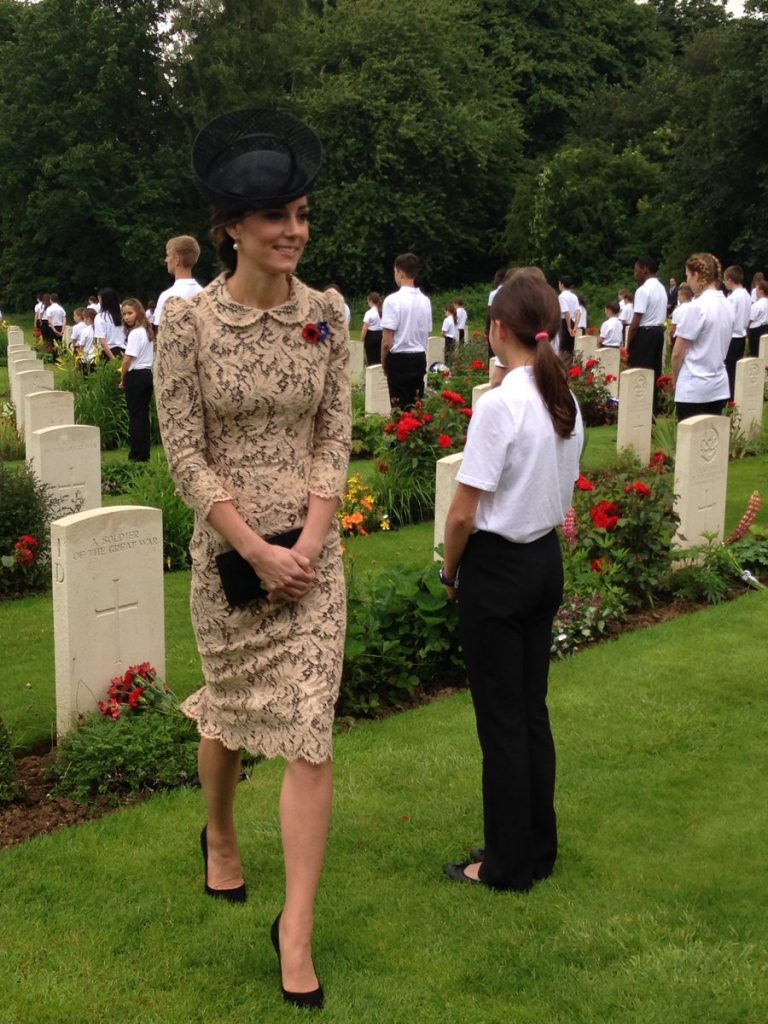 Harry also told the students: “It’s important that you are here. There are all sorts of parts of history that are being forgotten. It’s important for us to remember older history as well as more recent history. I’m actually quite jealous of you guys getting to spend five days here learning all about it. You will come back with a huge amount of knowledge.” 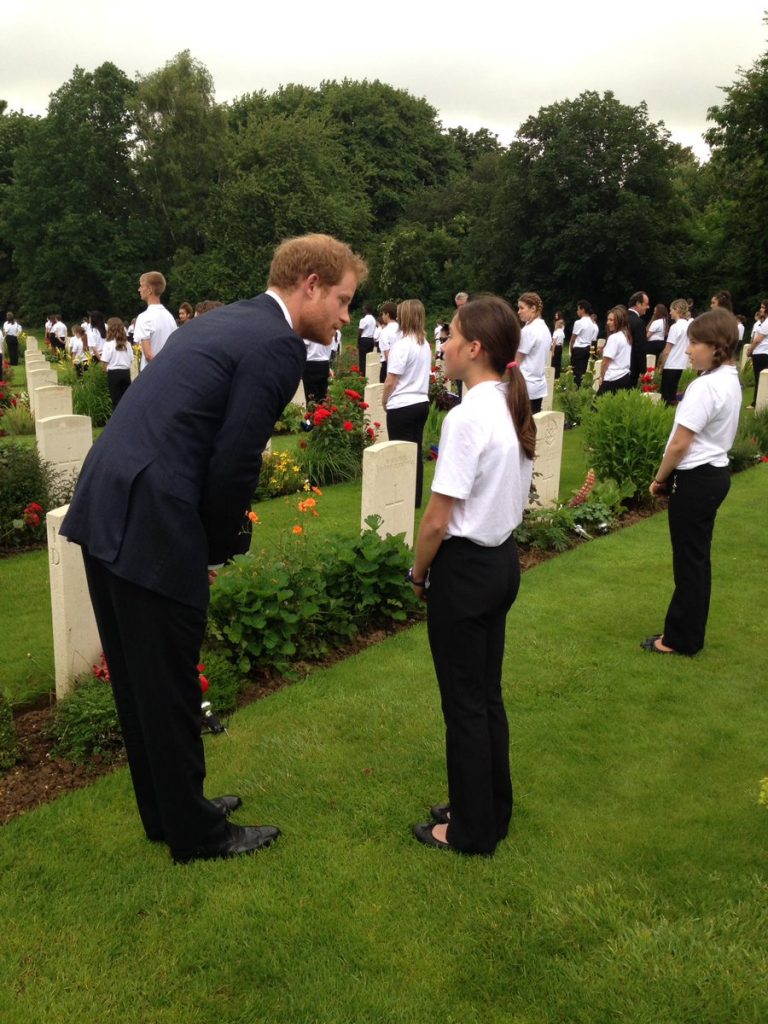 Kate chose a new bespoke lace dress for yesterday’s events. The dress features a peplum detail, peter pan collar, and three-quarter sleeves. The lace is from Sophie Hallette, a French textile house which made the lace for Kate’s wedding dress.

I don’t hate the idea of this dress. I like the length, the silhouette, and even the peplum, but I dislike the peter pan collar, the poofy shoulders, and the color. I’m all for #TeamUpdo, though.

Kate brought back her Annoushka Pearl Drop Earrings, and repeated a Lock & Company black “Lion Tamer” perching hat (£795.00) which she wore twice in 2011 – to Trooping the Color and a friend’s wedding.

Both Kate and Camilla wore a poppy and a cornflower. The cornflower (“bleuet”) is the French equivalent of the poppy.

After the Service of Commemoration at the Thiepval Memorial, Charles, Camilla, and the Gloucesters attended a ceremony at the Ulster Memorial Tower, and then a ceremony of remembrance hosted by the Government of Canada at the Beaumont-Hamel Newfoundland Memorial. 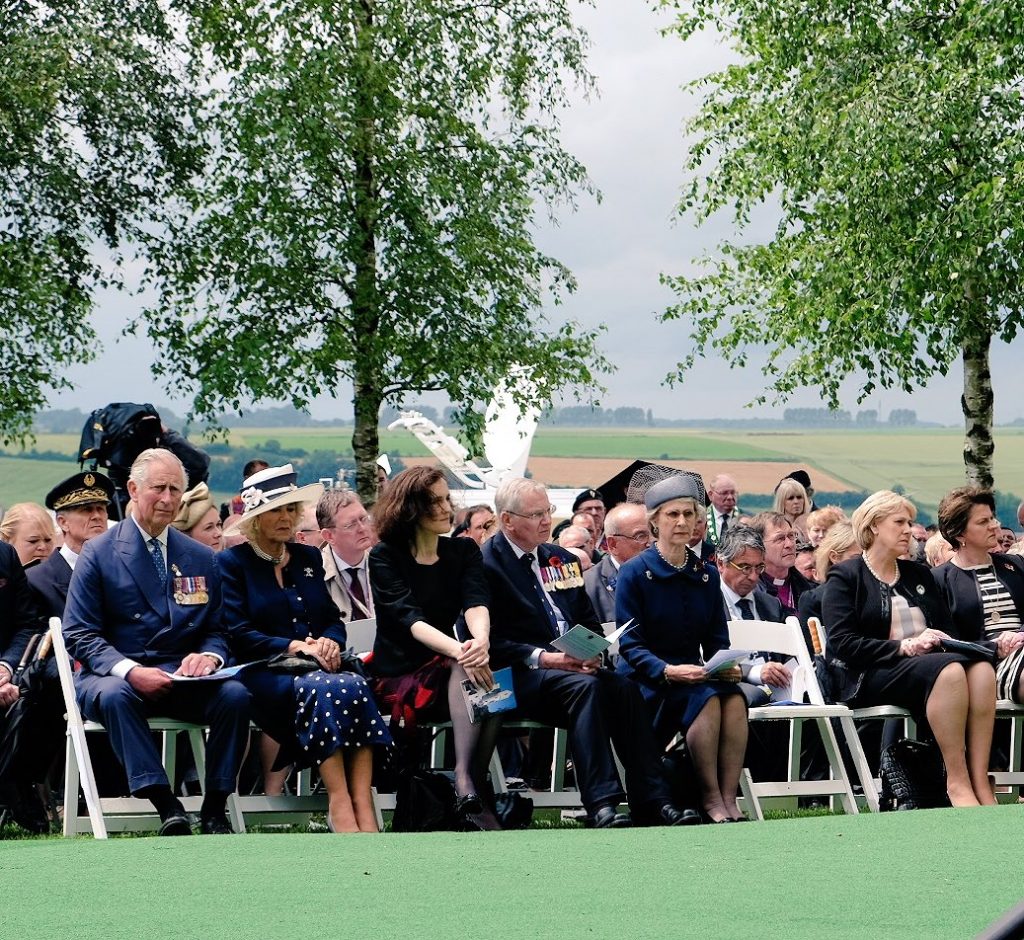 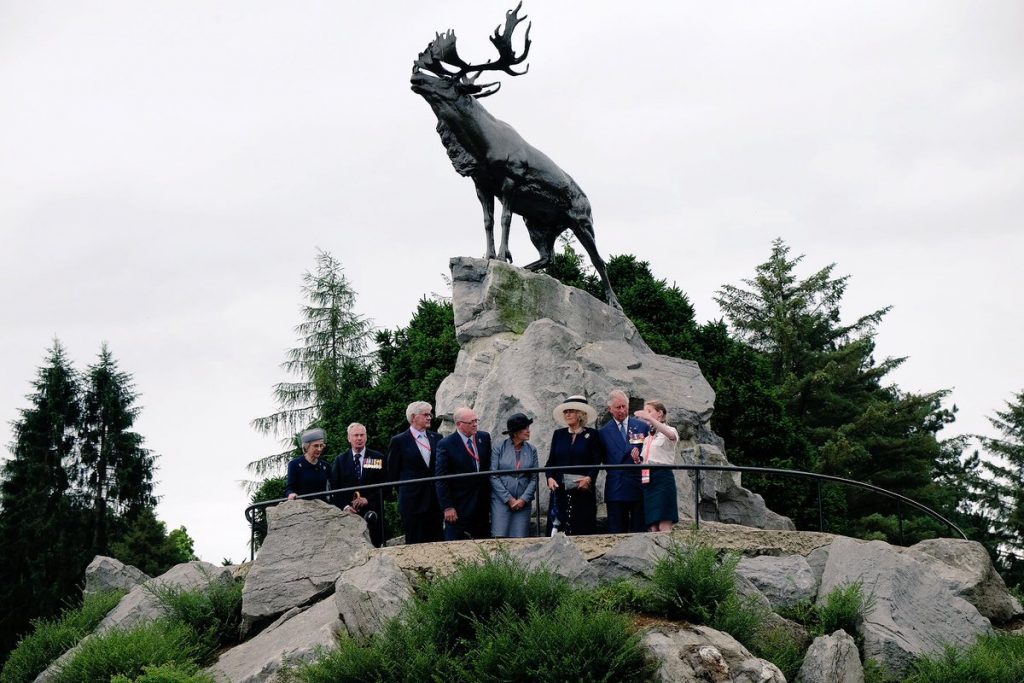 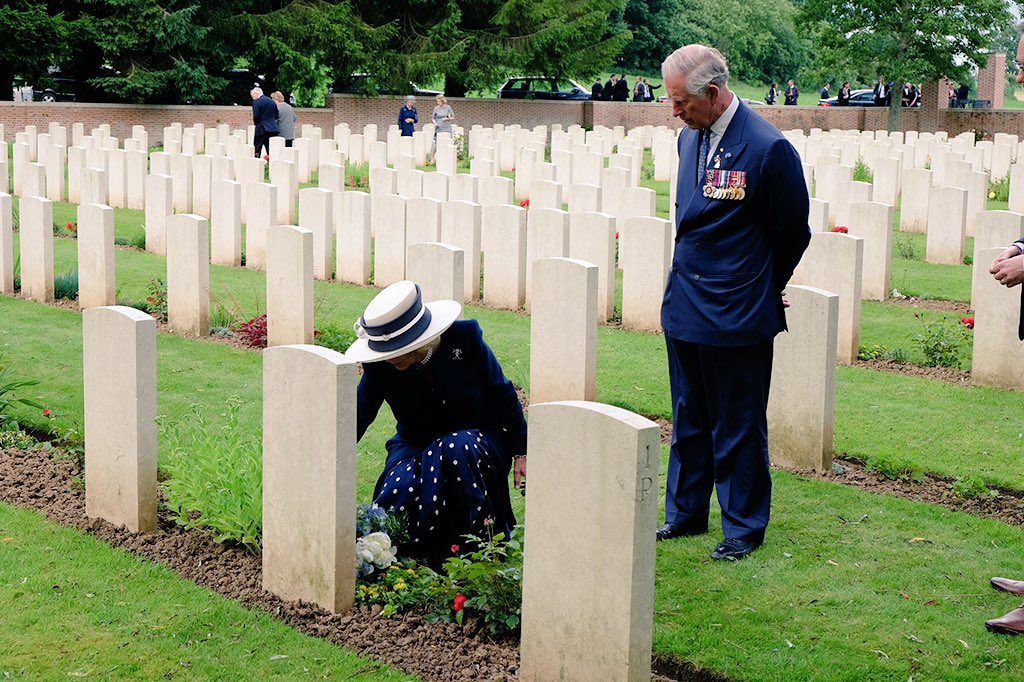 Some photos from the ceremony.

It was raining during part of the ceremony.

Prince Harry & the Duke and Duchess of Cambridge at a service to mark #Somme100 pic.twitter.com/s4V7U9j7DQ

257 thoughts on “William, Kate, and Harry join Prince Charles and Camilla for Battle of the Somme centenary”