William, Kate, and Harry will be in France for engagements commemorating the centenary of the Battle of Somme later today and tomorrow. Until then, let’s catch up with Queen Letizia.

Queen Letizia and King Felipe were in Navarra, Spain yesterday, June 29, to visit a Volkswagen Factory on its 50th anniversary.

Letizia decided to go ultra-feminine for the trip to the auto manufacturer, wearing a light pink chiffon blouse with a Hugo Boss “Rizalia” flared cotton blend skirt, Magrit heels, and white clutch. She looks nice, but it’s weird to see Leti in such a feminine style. She usually goes for more sleek looks.

Letizia paid tribute to her mother-in-law on June 22 when she attended a ceremony to mark the 30th anniversary of the Foundation for Help Against Drug Addiction (FAD). Letizia became honorary president of FAD in September 2015, taking over the role from Queen Sofia – who served as patron for almost thirty years.

Letizia honored Sofia in her speech:

“I do many things, I work with many people, are many citizens’ initiatives that deserve institutional support. But certainly one that has made ​​me feel worthy to serve, happy to go hand in hand with a cause, that is, without doubt, the Foundation for Help Against Drug Addiction, because its work points to the depths of the human condition: the values, the will, the individual decision-making, which is also what defines us as free beings.

“Thank you for both my predecessor, Queen Sofia, and thanks to everyone who made it possible, for the past 30 years. FAD is a leader in everything related to addiction, this institution has always been at the forefront researching, supporting all without hurting or blaming or stigmatizing, putting all their energy into preventing and informing, educating. Congratulations on 30 years of success.”

Letizia debuted a new pink outfit with black ribbon detailing, pairing it with her Prada Cipria Patent Pointy Toe Pump ($670.00) and Coolook “Kraz” earrings with Mother of Pearl and Onyx.

On June 15, Letizia and Felipe attended the board meeting for the Princess of Asturias Foundation. Letizia brought back those Uterqüe black leather culottes she rocked back in February. She paired them this time with a fuchsia blouse, black Prada Saffiano print patent leather pumps and TOUS Ruby and Emerald earrings.

On June 13, Letizia was in Salamanca for a flag presentation, where she presented the Spanish flag, donated by the City and County of Salamanca, to the Specialties Regiment of Engineers No. 11 (a division of the Spanish army).

While Letizia adhered to the Queen Sofia-set trend of wearing a long black dress and Spanish mantilla for flag presentation ceremonies, since becoming Queen, Leti has done things her way – wearing white to a flag presentation in May 2015.

This time, Leti wore a new Felipe Varela pink coat and dress, and the bow of the Order of Charles III. Leti wore pink Magrit pumps and Yanes earrings. I really like this outfit.

Leti gave a speech in which she thanked Salamanca for donating the flag and thanked the regiment for their service. 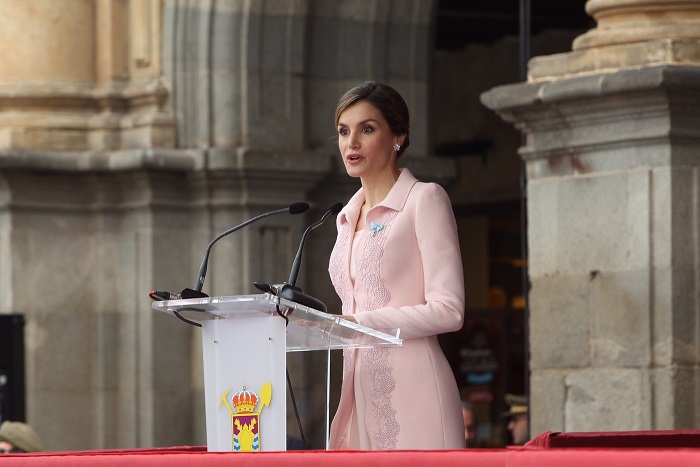 On June 8, Letizia and Felipe attended a lunch for the 10th anniversary of ‘El Economista’ newspaper.

49 thoughts on “Royal Round Up: Queen Letizia”