And by “continues”, I mean he made his second ever visit on behalf of male suicide prevention yesterday, May 12 (his first was back in March). Prince William visited CALM (Campaign Against Living Miserably), which is part of the Heads Together campaign, for the launch of a coalition of frontline services to help tackle the issue of male suicide. 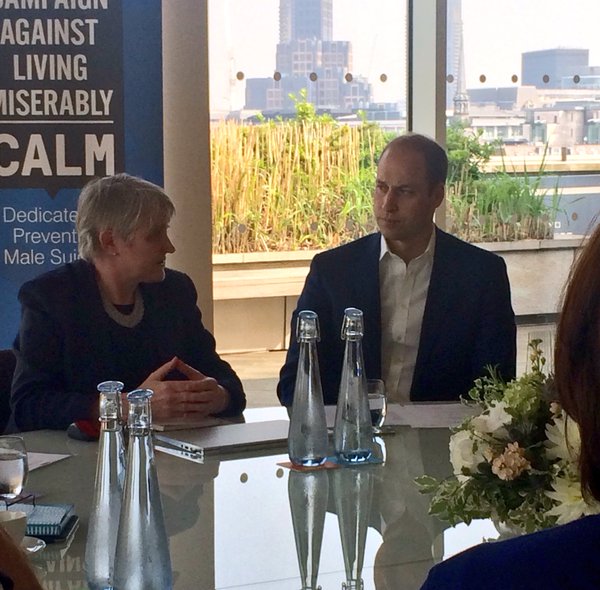 William attended the coalition’s inaugural roundtable discussion and then visited the RNLI Tower Lifeboat Station to meet first responders who deal with male suicide on a daily basis.

During the roundtable discussion, William said:

“In some of my charity work I have come across issues like this before and, coupled with my air ambulance work where my first job was a male suicide, I realised starkly how big a problem we have in this country. It was really close to me on that first day one of the guys told me that they have five suicides or at least attempted suicides a day in East Anglia alone. I like to think I am fairly well tuned into the charitable world but I hadn’t heard about this at all. My thing really is to get more men talking about their issues before it is too late and to stop feeling so strong and unable to seek help. It can destroy families, it can destroy lives.”

While talking with first responders at RNLI, William had this exchange with Stuart Simpson of the Met Police Marine Unit:

“William asked: ‘Do you guys think that some young guys don’t talk about their issues enough, don’t want to talk about this before it is too late?’

“Mr Simpson replied: ‘Well it’s a macho world, isn’t it. It’s very much social media, not want wanting to talk about your feelings. It’s often more macho to open up and show your feelings but a lot of men don’t see it that way.'”

At the roundtable discussion, Jane Powell, CEO of CALM, said:

“Suicide is frequently bracketed as the actions of the ‘mentally ill’. However, from our helpline we know that men who are suicidal are often tackling the kinds of life problems which can affect any of us, male or female, although it’s damned hard for men to admit to needing help or even find it. With the support of these male-dominated industries who know only too well the impact of suicide, we’re determined to normalise getting men help.”

Jonny Benjamin, who William met back in March, was also at the discussion and said:

“It’s great to see this fantastic coalition of emergency and transport agencies come together with CALM and Samaritans around the issue of male suicide. There is a real need for a resource to help men feel able to offer help, whether that’s a stranger on a bridge or your best mate.”

Back in March, I listed out some general statistics on suicide in both the United States and the United Kingdom, and listed out a bunch of warning sings and risk factors. If you would like to read those, please see my March 10 post. I’m going to list out some more male-specific suicide statistics in this post.

In the United Kingdom (from a 2015 government report with statistics for 2013):

In the United States (from the American Foundation for Suicide Prevention):

William visited Oxford University’s Magdalen College to open a brand new library on May 11 and made some comments. From the Daily Mail:

“Speaking about his time at St Andrew’s University, [William] said: ‘I can’t say I was a regular attender of libraries.’ […]

“Jack Barber, 21, who is reading history at Magdalen and helped raise money for the refurbishment, said William spotted that his book had been placed as a prop for the visit. ‘He saw my book and it was obviously the first one I plucked off the shelf. He said: ‘Enjoy your pretend studying’.’ […]

“William also revealed to two major benefactors at the library that he struggled with pronunciation of the college’s name. He asked Dusty and Hilarie Huscher whether the ‘g’ in Magdalen was silent, and they confirmed that it was pronounced ‘maud’ rather than ‘mag’. […]

“William also met a student carrying a poster which read ‘Welcome William’ and mentioned his Heads Together mental health campaign. Katie Shepherd, 20, a biology student at the college, said that while the Duke was pleased to see a reference to the campaign, it showed that she had not been studying hard. ‘He mentioned that I had spent more time doing this rather than work. He joked: ‘typical student’.’ […]

“While touring the school, the Duke joked with one student who had taken a year off from working as a journalist at the BBC in Indonesia. Alice Budisatrijo, who is studying for a Masters degree in public policy, said of her conversation with William: ‘I said I work for the BBC and he said, ‘I won’t hold that against you’.'”

William also said The Gruffalo is his, George’s, and Charlotte’s favorite book.

I know you guys have talked about some of these comments in the previous comment thread, but I bring them up because the one that bothers me the most is the comment to the woman who had #HeadsTogether on her poster. Really, William, you’re going to scold someone for taking the time to care about the mental health campaign you’re trying to launch? In what world does that make sense?

Today is a two post day with a post about Kate’s recent written messages and future appearances also. I will have a post on Prince Harry closing out the Invictus Games tomorrow (I was going to do that today, but they haven’t put Harry’s speech transcript online as of time of posting).