Kate Middleton, Duchess of Cambridge, has written a letter of congratulations in honor of East Anglia’s Children’s Hospices’ The Treehouse’s 5th anniversary. Kate opened The Treehouse, and gave her first speech, in March 2012 as one of her first official duties as Patron of EACH. Kate also wrote a birthday message for First News, and added several engagements to her calendar. 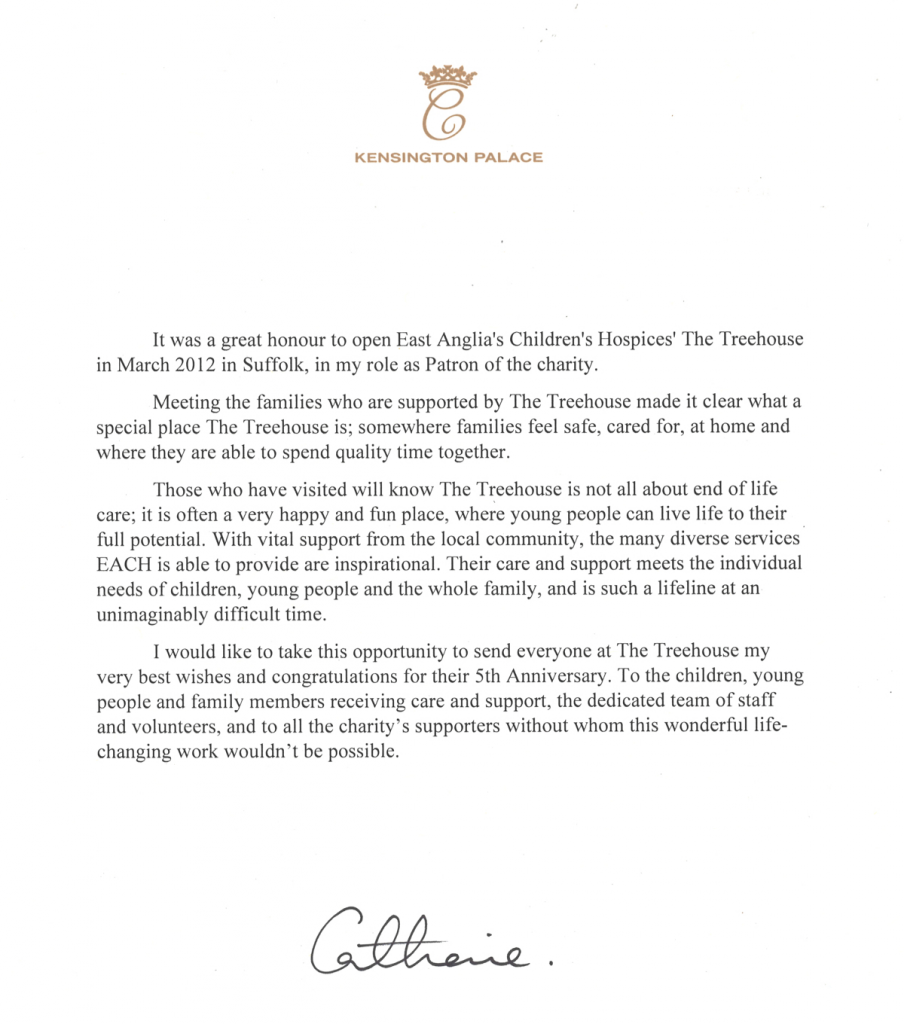 If you can’t or don’t want to read the photo, Kate’s message reads:

“It was a great honour to open East Anglia’s Children’s Hospices’ The Treehouse in March 2012 in Suffolk, in my role as Patron of the charity.

“Meeting the families who are supported by The Treehouse made it clear what a special place The Treehouse is; somewhere families feel safe, cared for, at home and where they are able to spend quality time together.

“Those who have visited will know The Treehouse is not all about end of life care; it is often a very happy and fun place, where young people can live life to their full potential. With vital support from the local community, the many diverse services EACH is able to provide are inspirational. Their care and support meets the individual needs of children, young people and the whole family, and is such a lifeline at an unimaginably difficult time.

“I would like to take this opportunity to send everyone at The Treehouse my very best wishes and congratulations for their 5th Anniversary. To the children, young people and family members receiving care and support, the dedicated team of staff and volunteers, and to all the charity’s supporters without whom this wonderful life-changing work wouldn’t be possible.”

I hate to nitpick, but is anyone else waiting for the rest of that last sentence? I realize she is sending her best wishes to the nouns in the second sentence, but the sentence fragment is still bothering me. Either combine the two sentences with a colon or give me a verb and a subject in the second sentence.

To nitpick again: it would have been great for Kate to revisit The Treehouse and give this message as a short speech.

“I would like to wish everyone at First News, and all of your readers, my congratulations on your tenth anniversary edition. You are doing such an important job ensuring that young people are informed about current events and issues. Through my work with organisations supporting children and young people, I have seen the importance of giving children a platform for their voices to be heard on the issues that matter most to them. Children can be affected by such a range of complex and challenging circumstances, and it is heartening to see First News covering important stories such as mental health and wellbeing in an informative and sensitive way. I wish you every success for future editions.” 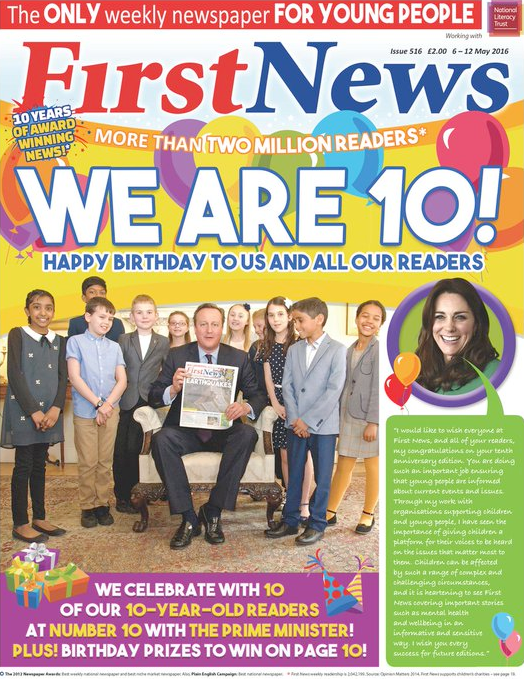 Kate has three engagements lined up:

On Sunday, May 15, Kate will join The Queen, Philip, Charles, Camilla, William, and Harry for the Windsor Horse Show celebrating HM’s 90th Birthday.

On Monday, May 16, Kate with join William and Harry for the official launch of the Heads Together campaign at the Queen Elizabeth Olympic Park.

On Friday, May 20, Kate will once again travel to Portsmouth to visit her buddy Ben Ainslie in her role as Patron of the 1851 Trust.

On Monday, May 23, Kate will join William and Harry and the Queen at the Chelsea Flower Show. It’s William and Kate’s first visit to the CFS, but Harry has been many times.

I still haven’t covered the rest of Kate’s British Vogue cover spread. It’s available to purchase online (finally) but I’m not sure I want to spend the five bucks to buy it. So I’m leaving it up to you my lovely readers: Do you guys want me to cover Kate’s British Vogue spread in it’s entirety?

Today is a two post kind of day. Go here to read about Prince William’s recent engagements to Oxford and his work with male suicide prevention. I will have a post on Prince Harry closing out the Invictus Games tomorrow (I was going to do that today, but they haven’t put Harry’s speech transcript online as of time of posting).

Here are a couple more photos from the March 2012 The Treehouse visit.