Prince William
March 13, 2016March 12, 2016 by katemiddletonreview221 Comments on Katie Nicholl doubles down on Prince William being the cause of his own bad press

Katie Nicholl wrote an interesting piece for the Mail on Sunday basically confirming what we’ve been saying for a while: that Prince William is a stubborn idiot who is responsible for his own bad press.

Nicholl wrote in part (for space, I removed the recap of all the PR blunders from the last two years):

“Royal insiders say the turning point in William’s fortunes came when the Cambridges and Prince Harry set up their new office at Kensington Palace two years ago. The move coincided with the departure of his former private secretary, Jamie Lowther-Pinkerton.

“A distinguished former SAS commander, Lowther-Pinkerton, 55, had spent a generation as a reassuring presence by the side of Princes William and Harry. Crucially, it is felt he was willing to stand up to the young man and William turned to him for advice right up until the birth of his first child Prince George in 2013, and made Lowther-Pinkerton godfather.

“There are some who say he is sorely missed. Today, William’s Private Secretary and team of aides are all, like him, in their 30s. One friend of the Royal Family says: ‘There is a feeling that perhaps there isn’t someone in William’s court who will put their foot down and say no if they think William is making the wrong decision.’

“‘William has changed and so have his aides,’ says another source. ‘William needed Jamie for advice and counsel because he was younger, but he’s a grown-up man now with his own ideas and opinions. He has a clear idea of how he wants to steer his PR machine. He has a good team around him, but the point is they all listen to William and rarely question him when sometimes William does need to be questioned.’

“At Kensington Palace, the team of aides include Communications Director Jason Knauf, 30, an American who dealt with the near collapse of the Royal Bank of Scotland as its spin doctor. He was appointed in 2014. The other senior figure is William’s popular Private Secretary Miguel Head, 37, who used to be the Palace’s head of communications.

“‘William was involved in the interviewing process when they appointed a new communications director and he liked Jason Knauf,’ says a source. ‘Others who were interviewed had big ideas to bring to the table, but William wanted to do things his way.’

“And Knauf, perhaps wisely, was willing to oblige.

“Then, last week, just as it seemed things appeared to be settling down, Kensington Palace released pictures of the Cambridges on a luxury vacation on the French slopes. The images, taken by the Press Association, went ‘viral’. And so did the backlash. The press was filled with a fresh slew of critical headline pointing out that ‘part-time Wills’ had sloped off despite having carried out just four engagements so far this year.

“No wonder Kensington Palace has announced a flurry of new engagements for the Duke and the Duchess. While the Palace would argue these were arranged months in advance, his aides must surely be relieved to have their ‘principal’ back on Royal duties.

“Last week, William carried out two days of engagements with Kate to promote mental health. Tomorrow William, together with his wife and Prince Harry, will join the Queen at Westminster Abbey for a Commonwealth Day Service. Perhaps, though, the temptation to shoot the PR messengers should be resisted. Because the person pulling the strings is William himself.

“The Mail on Sunday can reveal it was William who decided not to follow the Royal tradition of posing on the slopes in favour of a private photoshoot with PA’s Royal photographer John Stillwell. The pictures were carefully selected by the couple before being released once they were safely back in Britain. And it seems likely that the release date was chosen by William himself, against advice from some in his team. He was apparently delighted to have kept the press in the dark.

“According to Ingrid Seward, Editor of Majesty magazine: ‘His aides are very young and very good, but the problem is William has never really taken advice and has a tendency to think he is always right.’

“With his diary of Royal duties now filling up, including foreign tours, there are no doubt sunnier times ahead – particularly if he takes the brave decision to find someone to stand up to him.”

So basically what we’ve been batting around for a while: That Jason can only do so much if his employers are not willing to listen to him. While Jason isn’t doing a great job, since he’s not willing to stand up to William at all, the blame for William’s terrible PR can be laid on William’s own doorstep.

PS. It seems William has a fake concerned face, too. But on him it looks more like he’s constipated.

PPS. Can we please not make fun of the way Charlotte looks. I know several of you on here have mentioned that you don’t think she’s a cute baby, and that’s your opinion, not everyone has to think every baby is cute. But I read a comment elsewhere that said something to the effect that Charlotte is going to be so ugly when she grows up that she’s going to need plastic surgery (that comment disturbed the hell out of me). And I’ve read several comments that have said in a negative way that Charlotte looks like Carole.

I’m not one of those people who thinks every baby is cute, so I don’t think it’s necessary that everyone thinks every baby is cute. So saying you don’t think Charlotte is cute is fine. Commenting on who a baby looks like is fine – personally I think it’s a bit pointless since they change so much when they’re young, but I understand the desire to question which parent a baby looks like. 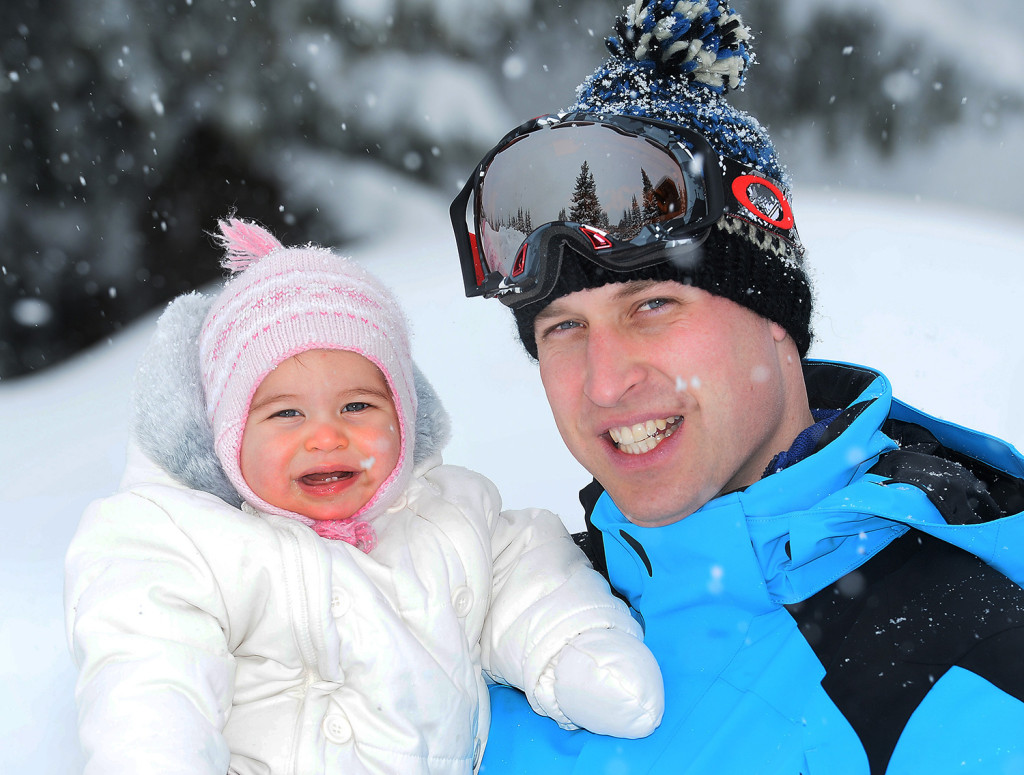