Crown Princess Victoria made her first appearance after giving birth to Prince Oscar on March 2 yesterday, March 30, when she attended this year’s Dag Hammarskjöld Lecture at Stockholm City Hall.

*Heads up: There is a video below that starts automatically, with sound.* 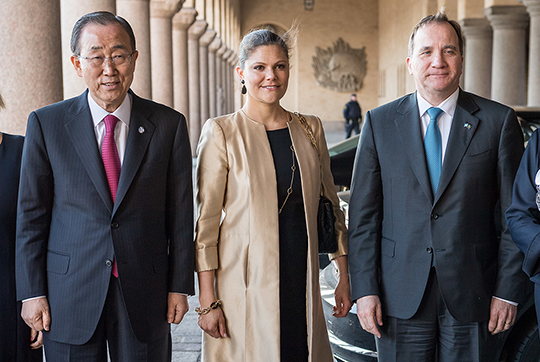 “The world is changing—dramatically, rapidly. We are more connected than ever before. More people than ever live in cities. New economic powers are rising. There are more than three times as many members of the United Nations as there were in Hammarskjöld’s day. New threats have emerged—climate change above all. And the human family has a new profile: more than half the earth’s people are under the age of 25.

Our shared challenge is to shape this new world for the better—to build a landscape of opportunity and peace, while conquering persistent injustices, from hatred to hunger. Around the world, we are being tested in old ways that Hammarskjöld would have recognized — and in new ways for which his example can remain our guide. Massive displacement – the most since the Second World War. Terrorism. Atrocious crimes that defy all norms of humanity. At such times, the United Nations relies on its strongest supporters to step up, speak out and stay true.”

“I am also grateful for the efforts of Sweden’s Royal Family. King Carl XVI Gustaf is a champion of climate action; Queen Silvia is an advocate of children’s rights; and I am especially pleased that Crown Princess Victoria has just agreed to be one of our Sustainable Development Goal Advocates — and I welcome her enthusiastic engagement.”

Dag Hammarskjöld Lecture is an annual event that began in 1998 and is held in memory of Dag Hammarskjöld – the UN’s second Secretary-General from April 1953 until September 1961 when he died in a plane crash while on a peace mission in the Congo – and the values ​​he stood for in his work: dedication, humanism, solidarity, and international cooperation.

As we learned earlier in the year, Victoria is one of 16 ambassadors of Agenda 2030 – the UN plan to eradicate poverty and hunger, protect the planet from degradation, and ensure that all human beings can enjoy prosperous and fulfilling lives and that economic, social, and technological progress occurs in harmony with nature.

Clearly Victoria is a strong supporter of the UN’s work since she broke her maternity leave after only 28 days to attend this lecture.

Here’s a short video of Victoria taking her seat in City Hall.

PS. There is still time to vote for your favorite royal if you haven’t already.