I have not covered Queen Letizia in quite some time, so let’s take a moment to catch up with her.

Last Thursday, February 25, Letizia and King Felipe were at the opening of the 35th edition of the International Contemporary Art Fair – ARCO 2016. The fair, which started in 1982, attracts collectors, curators, museum directors, gallery owners, artists, and professionals from around the world. This year the fair brought together 221 galleries from 27 countries.

Maybe because it was an art fair Letizia decided to go with an “arty” fashion choice? Leti went with black leather culottes from Uterqüe‘s SS collection (€275) which feature an exposed zipper. I don’t like them. I think they look like someone cut up a trash bag, formed it into pants, and stuck a zipper on it. Paired with her lace-up Magrit shoes the pants cut off her legs and make her look shorter.

On Monday, February 22, Letizia commemorated the 50th anniversary of the College of the University Children’s Hospital Nino Jesus. The University Children’s Hospital Nino Jesus, founded in 1877, is the birthplace of the birth of pediatric specialty in Spain. The school, founded in 1966, serves students in Early Childhood Education, Primary Education, and Secondary Education, with a main objective to provide educational support and academic monitoring for the hospitalized students. 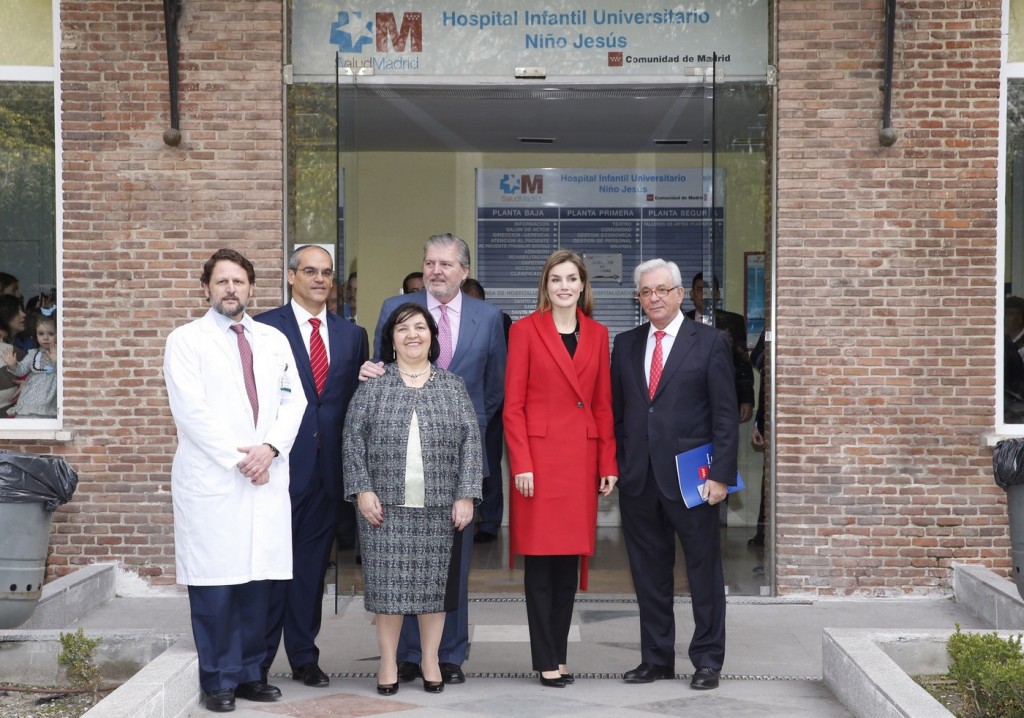 Letizia began her visit with a meeting to discuss the work of the school before touring the facility. Leti sat in on a class and talked to the children about their schoolwork. Leti finished her visit with a reception with hospital directors, teachers, medical staff, alumni, and patients and their families. 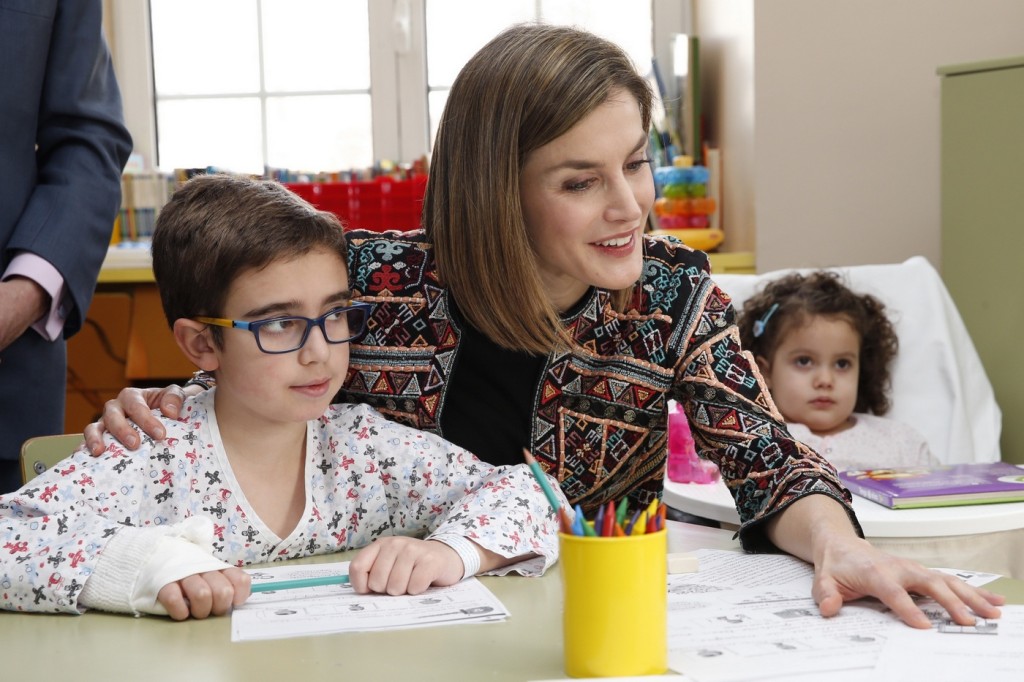 Letizia arrived to the hospital in a red Hugo Boss wrap coat. Underneath she wore a Zara embroidered jacket and Hug Boss pants and shirt.

On February 16, Felipe and Letizia presided over the meeting of the Royal Board of the Prado Museum where they discussed the Action Plan 2013-2016 and the program of activities for 2016. 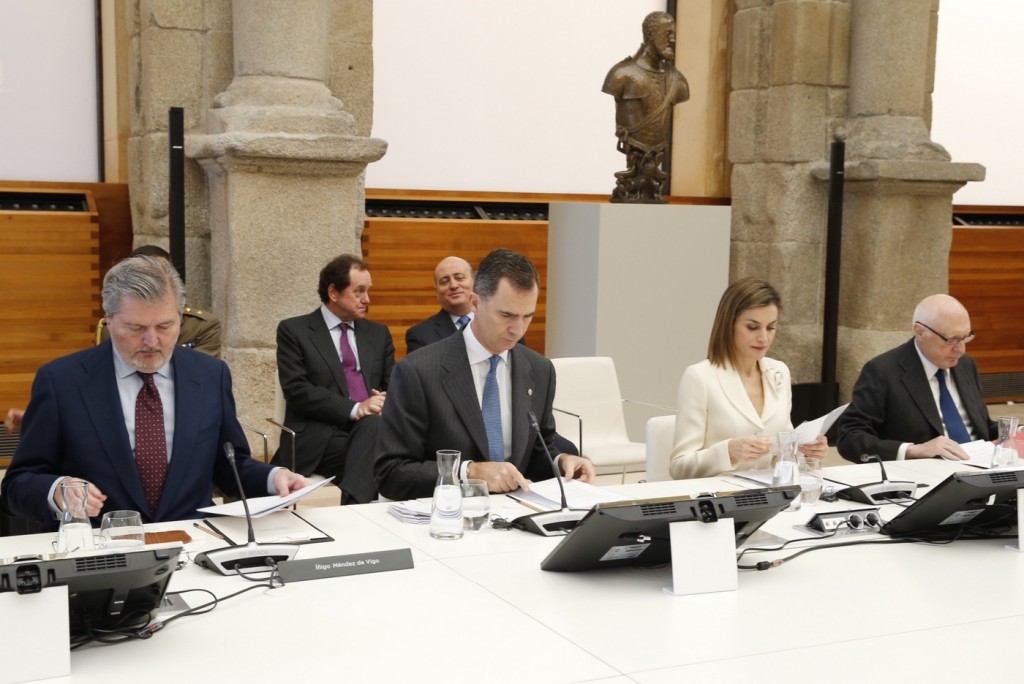 Leti arrived wearing her red Hugo Boss wrap coat. Underneath, Leti wore a Felipe Varela ivory skirt suit with a flower detail on the lapel. Leti finished off her outfit with her Carolina Herrera “Maysa” clutch, Lodi “Debra” bordeaux patent heels, and ruby dangle earrings. I like this outfit – the red coat looks great and the detailing on the suit’s lapel is a nice touch.

February 10 saw Letizia at the Royal Palace of Madrid where she oversaw the renovations being done to the palace to facilitate access for people with disabilities. 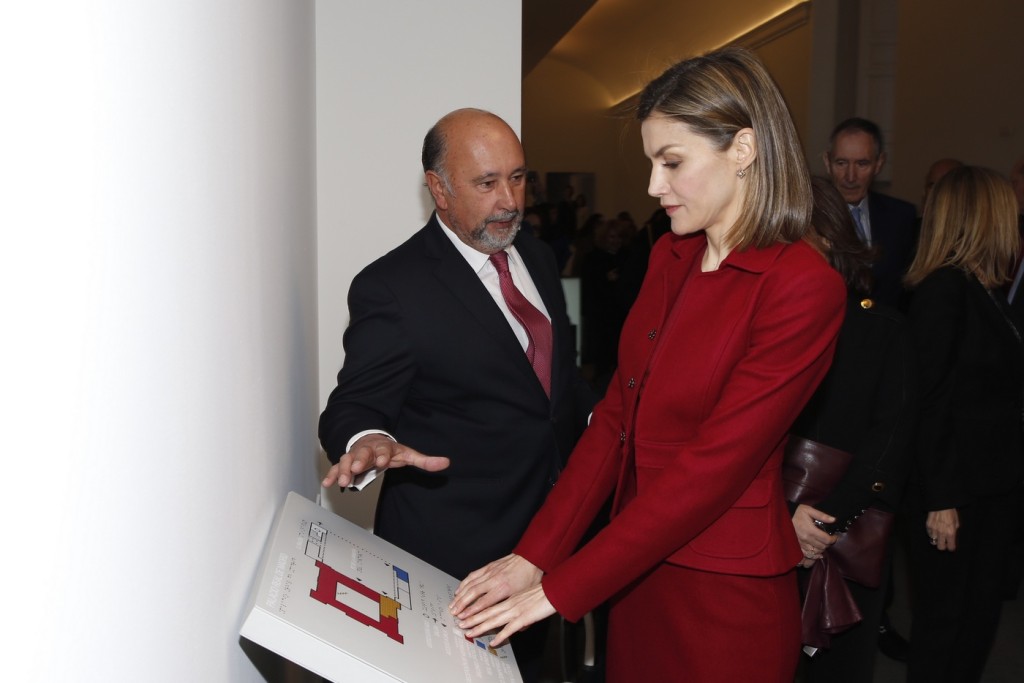 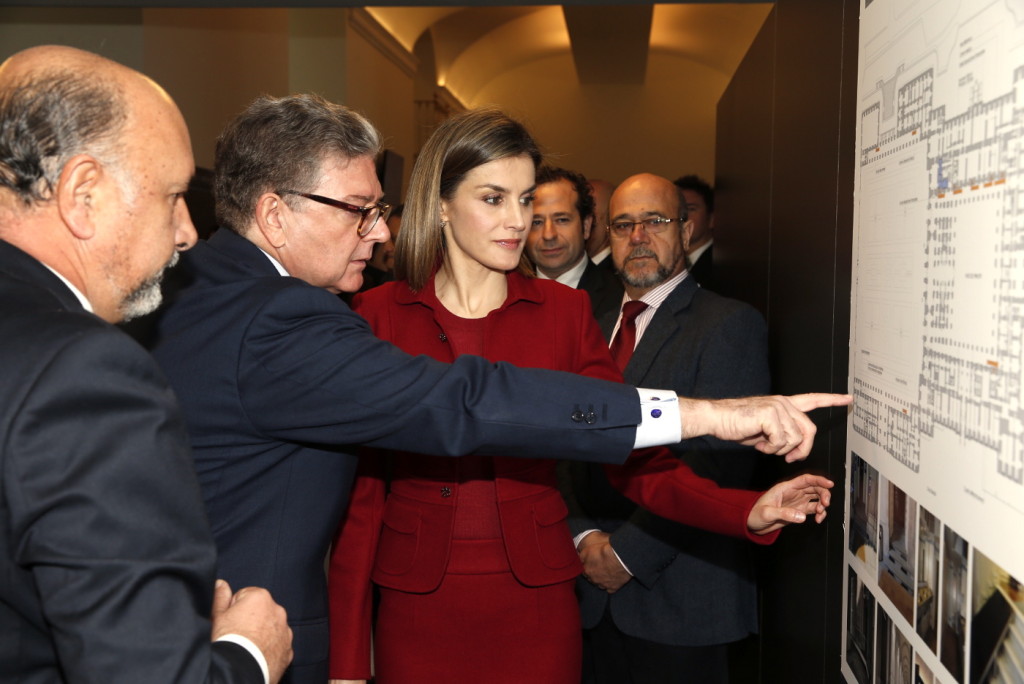 Letizia repeated a red Felipe Varela skirt suit which she’s had for years. She wore a burgundy knit top under the jacket, and paired the outfit with her Lodi “Debra” bordeaux patent heels. I really like this outfit – I just love the color.

February 3 saw Letizia attend the V Forum Against Cancer “Por un enfoque integral” as part of her presidency of the Spanish Association Against Cancer. Leti attended the lecture “The value of volunteer support to cancer patients in today’s society” and two debates: “Volunteering another member of the care team?” and “Sharing integration experiences of volunteering in the care of cancer patients and their families.” 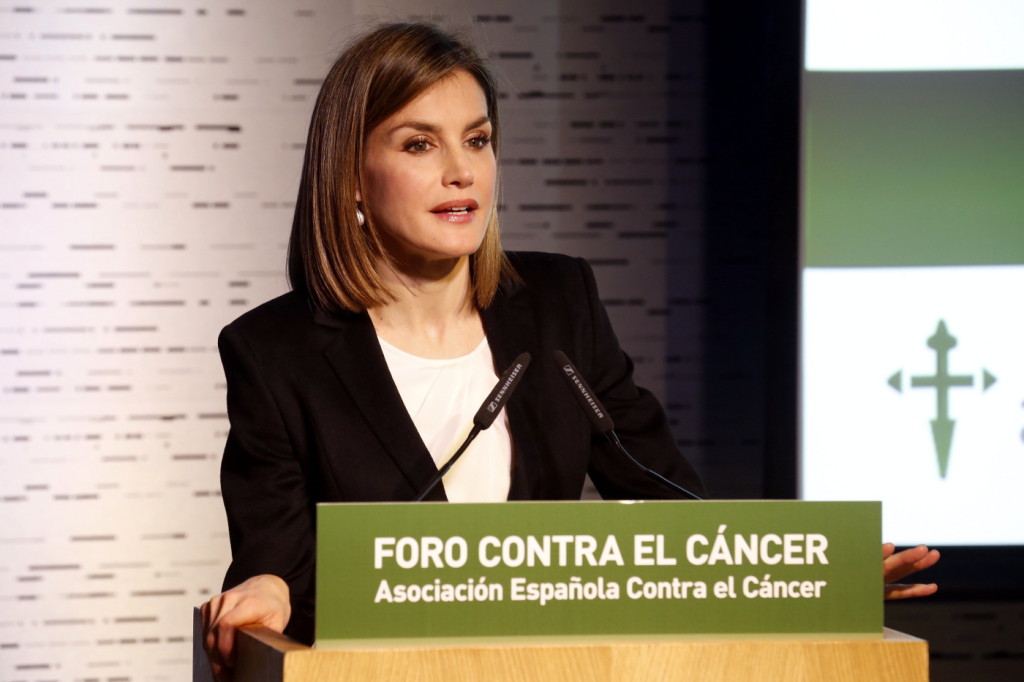 As part of the forum, Letizia gave a speech. Sadly, the Spanish royal website did not post the transcript. But they did post a video of her speech on YouTube. I don’t speak Spanish and rely on Google Translate to translate the transcripts of her speeches, so I don’t know what she says in the video. Her speech starts at 0:48.

For the V Forum Against Cancer, Leti wore a Hugo Boss jacket and skirt with a white blouse underneath.

On January 26, Leti had audiences at Zarzuela Palace. She wore an outfit she’s worn before – a red blazer, a Mango floral blouse, and black trousers.

89 thoughts on “Royal Round Up: Queen Letizia”