Royal Round Up: Crown Princess Mary

Since it was Crown Princess Mary‘s birthday on February 5, and I haven’t covered Mary in a while, I thought I’d do a royal round up for her today. This is one of two posts today – go here to read about Pippa Middleton’s BHF event and a Duchess Kate guest editor preview.

On January 25, Mary attended a reception organized by Women Deliver in Copenhagen. The Mary Foundation donated 250,000 kr to Women Deliver to make it possible for 13 young women and men (11 women and 2 men) from different parts of the world to participate in the Women Deliver’s Global Conference on girls and women’s health, rights and well-being, to be held in Copenhagen in May 2016.

Mary said: “The recipients of The Mary Foundation’s annual donation are all young people who are dedicated to creating a better future for women and girls in their home country. Young people’s voices are important; they are the next generation’s leaders and agents of change. The Women Deliver conference in Copenhagen is a unique opportunity for the grant recipients to contribute their insight and to strengthen their network, gain new knowledge and inspiration for their future work and I look forward to meeting them.” 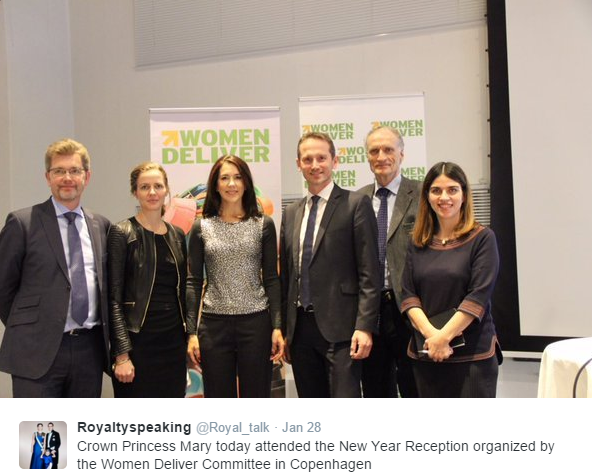 On January 29, Mary presented the Women’s Board Award 2016 to Lene Skole. Mary gave a speech, but I cannot find a transcript. 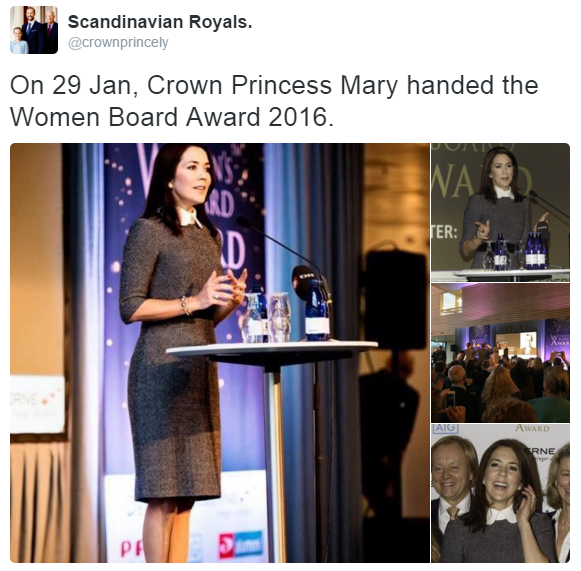 Mary wore a purple Alexander McQueen gown from the Fall 2004 collection which Mary first debuted in 2005. I want to like this gown, I really do, but I just can’t. I don’t like the satin bits, they just seem so odd. 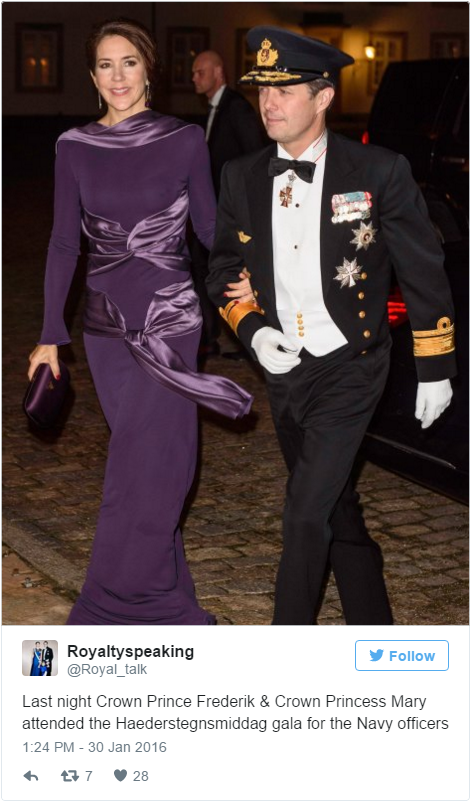 Mary kicked off her February on the 1st by participating in the “Værket” network group, which is a joint participation between the Mary Foundation and the Red Cross. The network group was established in 2015 and is a service for adults who experience prolonged loneliness.

Mary’s tan coat is from By Malene Birger. 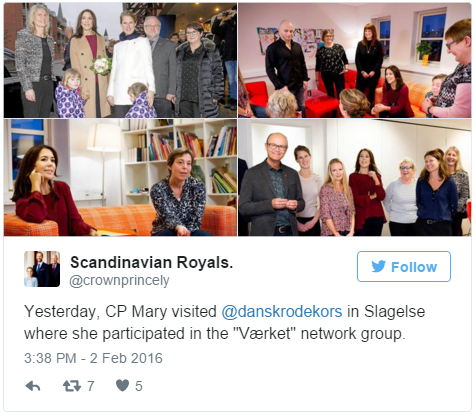 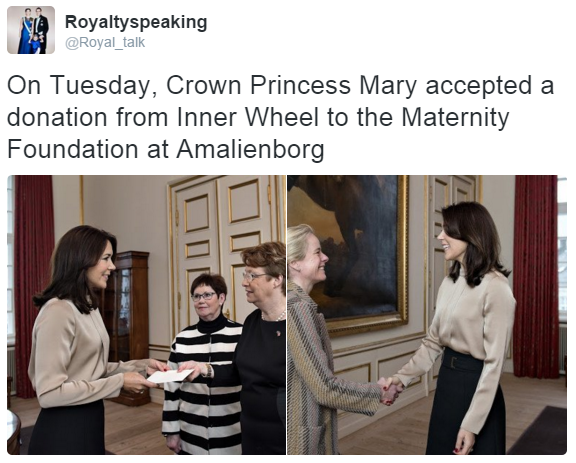 On February 4, Mary spoke at a Conference on Sexual and Reproductive Health and Rights in Humanitarian Crises. Again, I cannot find a transcript.

I’m going to vent some frustrations right now, get ready: It really bothers me that not all of the royal houses post the transcripts of the royals’ speeches on their websites. The Spanish royal website does, and the website for Charles/Camilla/William/Kate/Harry does, and the Dutch one does as well, but the Danish and Swedish ones don’t, and the BRF one only does transcripts for the Queen’s speeches. Come on, you guys, get it together. Don’t you know how PR works?! Okay, vent over. 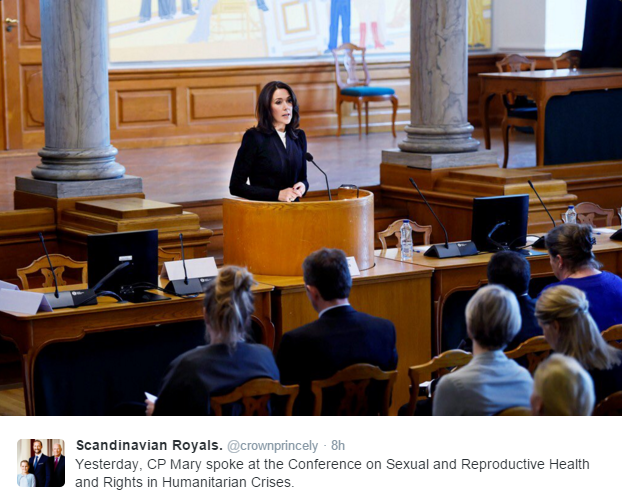 The evening of February 4, Mary presented the Cancer Society Merit Award 2016. The Cancer Society Merit Award aims to honor, among others, a person or group that has made a special effort in cancer, and to inspire others to give cancer patients optimal treatment, and care. The prize is awarded in connection with the international World Cancer Day. 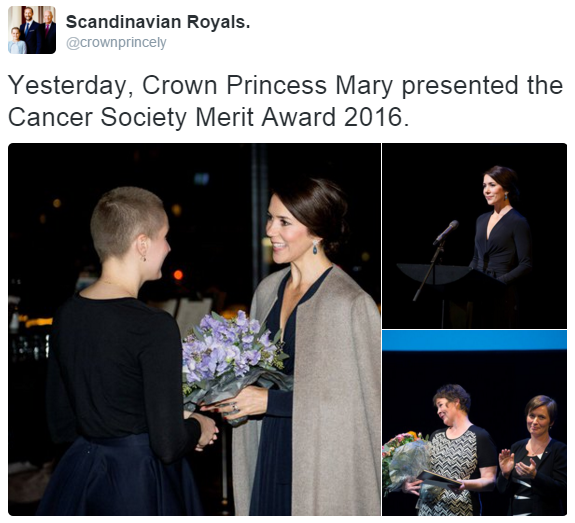 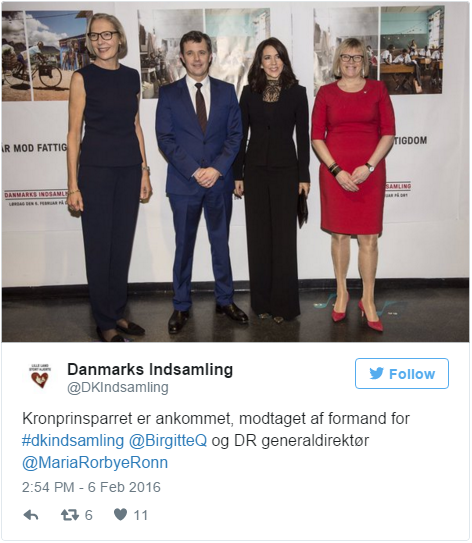 Mary wore a crisp black suit with a black lace blouse, Gianvito Rossi pumps, and a Carlend Copenhagen clutch. I love the suit, but I don’t like the lace blouse. It looks like the lace is trying to strangle her.

On a side note: Crown Princess Mary acquired a new patronage. She agreed to be patron of EMS2016 – which is the European Emergency Medical Services Congress – which will be held in Copenhagen from May 30 to June 1.

45 thoughts on “Royal Round Up: Crown Princess Mary”