Prince William, Kate Middleton, and the Middletons join The Queen for church

Yesterday, January 10, Kate Middleton made her first appearance of the year as she joined The Queen for Sunday church and afterwards for a wreath laying for Gallipoli. The Middleton joined the royals for church. But none of that matters because Prince William got a hair cut.

[I realize it’s a somber ceremony but do they have to look so grumpy?]

Let’s start with the Queen, because respect. After Sunday service at St. Mary Magdalene Church the Queen and Prince Philip, along with William and Kate, headed to the War Memorial Cross on the Sandringham estate (which was erected in 1920 by King George V and Queen Mary) where HM and Philip both laid wreaths to mark the 100th anniversary of the final withdrawal of British troops from the Gallipoli peninsula. A minute of silence was observed in memory of those who lost their lives at Galipolli.

The Gallipoli land campaign, in which a combined Allied force of British, French, Australian, New Zealand, and Indian troops sought to occupy the Gallipoli Peninsula (located in Turkish Thrace, the European part of Turkey) and the Dardanelles Strait during World War I, began on April 25, 1915 against Turkish forces of the Ottoman Empire. The Allies, unable to advance more than a few kilometers, withdrew after eight months. The campaign cost the Allies approximately 50,000 killed and up to 200,000 wounded, and the Ottomans approximately 85,000 killed and 160,000 wounded.

It was a poignant ceremony for the people at Sandringham as 141 gardeners, gamekeepers, farm laborers, and servants from the Sandringham estate fought in the Gallipoli campaign. Seventeen of the staff including their senior officer Captain Frank Beck, who was the Sandringham land agent, were listed as missing in action after an attack on Turkish troops on August 12, 1915.

The Queen wore a lilac coat and hat, and her Pearl Triangle Brooch.

Now to William’s hair, or lack there of. I kind of feel bad for mentioning this (because I don’t want to make fun of balding men), but you guys comment on how Kate seems to have aged a lot in the five years since her marriage, but poor William has aged even more so, in my opinion. This is William’s new hair cut, which shows just how much the Windsor balding gene has kicked in: 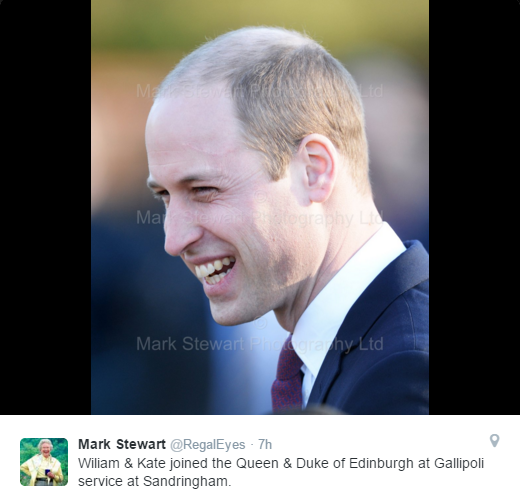 And this is what William’s hair looked like in February 2011, almost five years ago:

And this is what William looked like in April 2005:

Ah man, as a teenage girl I remember William looking so hot circa the early 2000s. He’s not doing it for me anymore even in the old photo, but I remember having the biggest crush on him in those days. And Daniel Radcliffe. I was, and still am, a huge Harry Potter fan.

Kate repeated that Michael Kors Collection “Guncheck Wool Trumpet Skirt” and “Virgin Wool Plaid Blazer” she debuted the Sunday after Christmas. We finally got a good look at her wearing it, and I’m still not in love. I think it would be an okay office outfit if the skirt were a bit shorter (and worn with different shoes). Or if the jacket were worn with pants. I like the jacket; it’s the skirt I’m not liking.

Kate wore a black turtleneck underneath the jacket and wore her Cornelia James gloves. Kate wore her hair up in a nice updo, which I like.

All four Middletons – Michael, Carole, Pippa, and James – joined William, Kate, and the Queen for church, though they did not attend the wreath laying.

Prince Harry was not there; neither were Prince Charles and Camilla.

More photos and Gallipoli stories at the Daily Mail – including a photo of Kate curtsying.

271 thoughts on “Prince William, Kate Middleton, and the Middletons join The Queen for church”