The polls have closed and the votes are in! Thank you to everyone who participated in the 2015 review polls of Kate Middleton‘s dresses, coats, gowns, separates, and hats. There were some predictable outcomes in certain categories, especially for least favorite; and there were some surprises I was not predicting in some of the categories, though I’m happy to see some of my favorites near the top in some of them.

As voted by you, the favorites of 2015 were: The Fold “Eaton Dress Winter White Tweed” dress; the Christopher Kane bespoke blue coat; the Jenny Packham bespoke red tulle gown; the LK Bennett teal “Davina” dress and “Jude” jacket; and the Jane Taylor navy hat with bow.

And the least favorites of 2015 were: The Hobbs “Animal Shirt Dress”; the Catherine Walker “Astrid” coatdress; the Erdem “Alouette” printed gown; the Michael Kors Collection Skirt and Blazer; and the Lock & Company “Marisabel” white hat.

The top two vote-getters for favorite dress of 2015 were a surprise to me since both dresses got comments of “not appropriate for the occasion” when Kate originally wore them: The Fold “Eaton Dress Winter White Tweed” (16.16%) and the Dolce & Gabbana “Guipure” purple lace dress (11.42%).

My favorite dress of 2015, the Emilia Wickstead bespoke teal dress, tied for ninth place with the Matthew Williamson grey dress with turquoise and gold embellishment with 3.90% each. Languishing in last place was the Hobbs “Animal Shirt Dress” with only 0.56% of the vote. 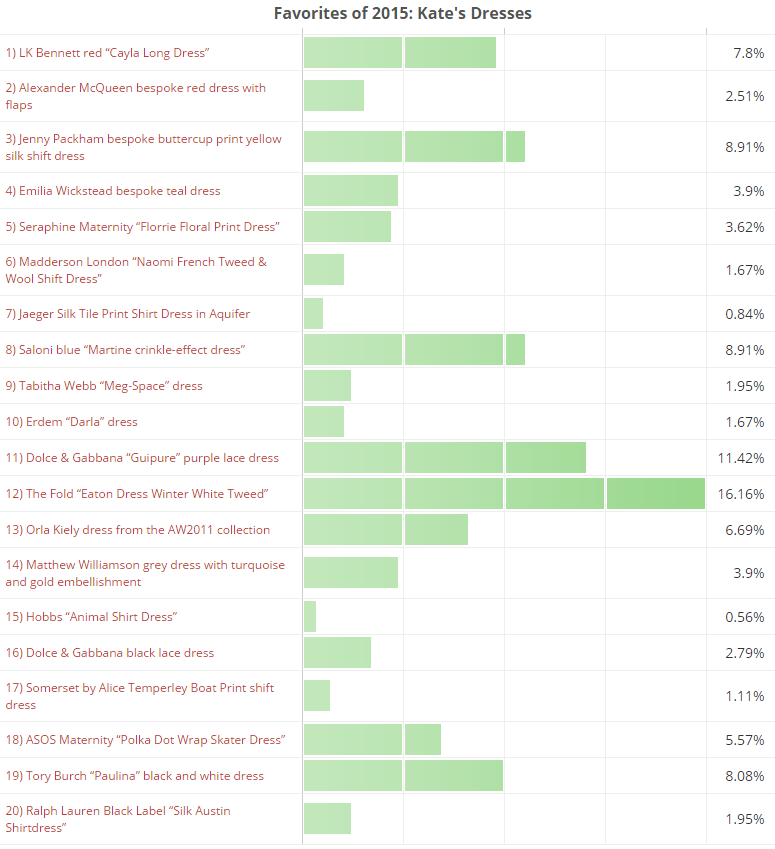 I hate to break it to the people who loved that Hobbs dress, but it got the most votes for least favorite dress of 2015 with 26.47% of the vote.

Second place was my least favorite of 2015, the Jaeger Silk Tile Print Shirt Dress in Aquifer with 13.82%. 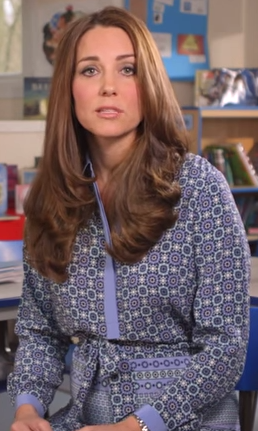 Oddly enough, no one seemed to find the Orla Kiely grey dress from the AW2011 collection to be their least favorite of 2015 because it literally got 0 votes for least favorite. 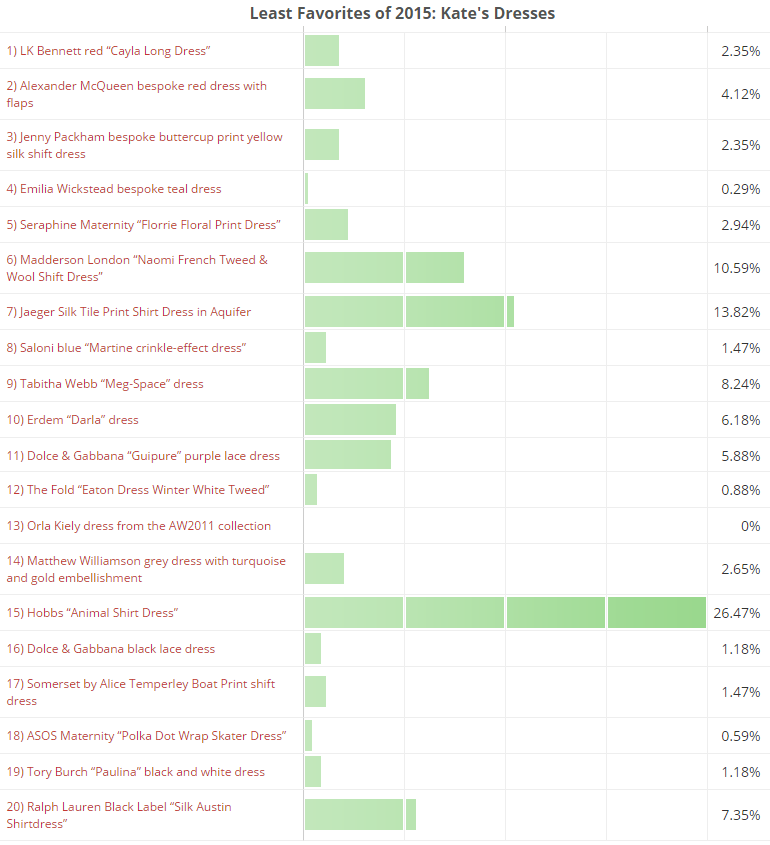 The top two vote-getters in the coat category were again not what I was expecting. Number one was the Christopher Kane bespoke blue coat worn in Scotland (15.90%); and a close number two was the Alexander McQueen bespoke white coatdress worn to Princess Charlotte’s christening (14.07%).

My personal favorite coat (and favorite outfit overall) of 2015 came in third: the Beulah London Chiara Wool Navy Trapeze Overcoat (12.84%). A close fourth was another surprise to me: the Mulberry Cerise Wool Silk Double Crepe Coat (12.54%). 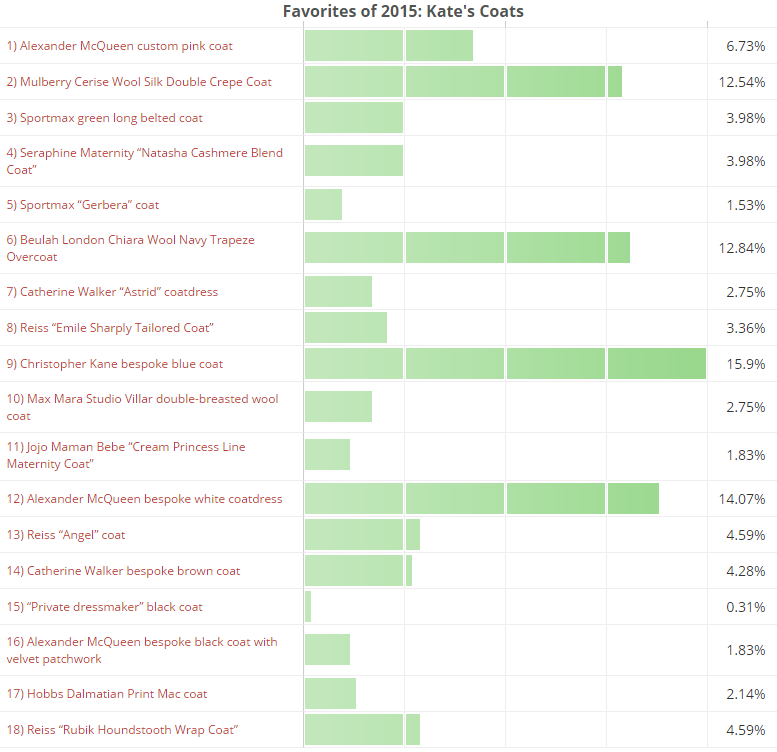 Third was both surprising and not surprising: the Reiss “Rubik Houndstooth Wrap Coat” (9.03%). I did not like this coat because of the houndstooth, though many of you said you liked houndstooth; so surprising yet not surprising that it ended up third least favorite coat of 2015 (BTW, I feel vindicated in my dislike of houndstooth now). Fourth was a coat I actually kind of like: the Sportmax “Gerbera” coat (8.70%) – I would totally buy this coat, and the Beulah London coat, for myself (if they were cheaper). 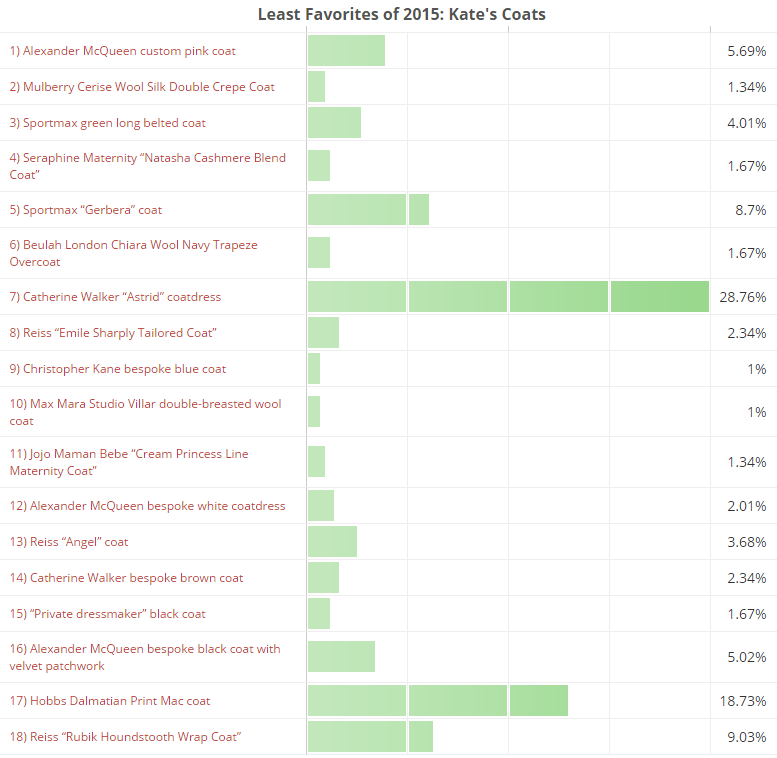 For Kate’s separates, the majority of those polled, 48.14%, chose the LK Bennett teal “Davina” dress and “Jude” jacket as the favorite of 2015. A distant second was the Michael Kors Collection Skirt and Blazer with 25.47%, followed by the Luisa Spagnoli red jacket and skirt with 16.77%, and finally the Polka dot jacket and skirt with 9.63%.

Though many of you liked the Michael Kors when Kate repeated it this past Sunday, the majority of those polled, 44.97%, said it was their least favorite of 2015. Followed by the Polka dot jacket and skirt with 24.50%, the Luisa Spagnoli red jacket and skirt with 18.12%, and lastly the LK Bennett teal “Davina” dress and “Jude” jacket with 12.42%.

Not surprisingly, the Lock & Company “Marisabel” white hat topped the list as least favorite hat of 2015 with 58.51% of the vote. The Black “butterfly” hat was a distant second with 13.48% of the vote.