Royal Round Up: Crown Princess Victoria and Prince Daniel visit Peru and Colombia

I hope everyone who celebrated Halloween had a fun and safe celebration. We’ll kick off November with a long-awaited post on Crown Princess Victoria and Prince Daniel‘s visit to Peru and Colombia the week before last, October 19-23.

A programming note: This coming week we’ll have posts catching up with the royals that we missed during the two weeks Duchess Kate decided to fit in all of her appearances, plus November’s Hot Guy. Kate will be back in action on November 7 when she and Prince William join the Queen and other family members at the Festival of Remembrance at the Royal Albert Hall. Then on November 8, Kate will attend Remembrance Sunday at the Cenotaph with the other royals.

Victoria and Daniel started their South American visit on October 19th in Lima, Peru where they met with the President of Peru, Ollanta Humala, and First Lady, Nadine Heredia, at the Presidential Palace.

The next stop was the Universidad de Lima where Victoria and Daniel attended a seminar to promote university collaborations between Sweden and Peru, and the scholarship program BECA 18 – which is a scholarship grant that gives young people in poverty access to higher education.

Victoria gave a speech where she quoted the Peruvian writer and Nobel Prize winner Mario Vargas Llosa, saying in part:

“Now Sweden may seem far away, but when the Peruvian writer Mario Vargas Llosa came to Sweden five years ago to accept the Nobel Prize in literature he said:

“‘I never felt like a foreigner in Europe or, in fact, anywhere. In all the places I have lived… …I felt at home. I have always found a lair where I could live in peace, work, learn things, nurture dreams, and find friends, good books to read, and subjects to write about.’

“I’m sure that those of you who decide to study in Sweden will also find a place to feel at home, to nurture your dreams, and to bring excellence to the sciences or the arts. And perhaps one day, some of you will return to Stockholm to accept your very own Nobel Prize.”

As a side note, I’m really glad the Swedish website posted Victoria’s speeches. They don’t always, so it was a nice change to be able to read her speeches from this tour.

After the seminar, Victoria and Daniel visited an H&M store at Jockey Plaza in Lima. Something I actually didn’t know until looking it up for this post, H&M is a Swedish brand. Which explains why Victoria wears so much H&M. Anyway, Vic and Dan met with employees and learned about H&M’s operations in Peru and South America.

Here’s a picture of just Daniel because I know some of you love him.

In the afternoon, Vic and Dan visited the Museo Nacional de Arqueología, Antropología e Historia where they were given a tour of the Paracas fabrics which the Museum of World Culture in Gothenburg has returned to Peru. To end the day, Vic and Dan attended a reception at the Swedish Consulate General in Lima.

For day 1, Victoria wore a red version of the purple bespoke Seraphine Maternity dress she wore to Prince Nicolas’ Christening. Victoria wore a black and white Malinda Damgaard hair piece, and a butterfly brooch. For the evening reception, Victoria changed into a black dress with an embroidered black coat. 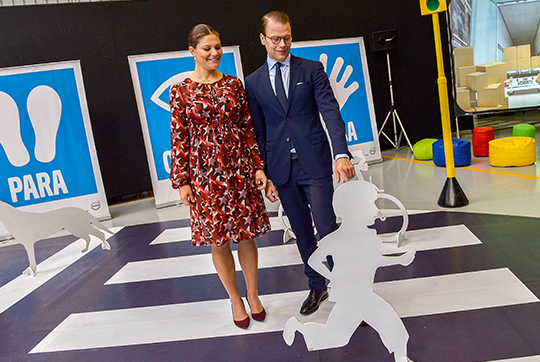 The couple then visited the cancer institute, INEN – which specializes in the prevention, detection, diagnosis, treatment, and rehabilitation of people affected by tumors or neoplastic diseases.

After visiting INEN, the couple went on a guided tour of the historic center of Lima before having a meeting with the Mayor. 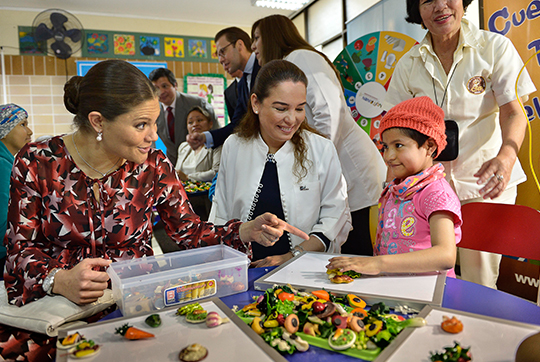 For Day 2, Victoria wore ASOS Maternity. Vic wore a version of the “Maxi Dress In Star Print” ($98.53). Victoria’s dress is shorter and has a different neckline. I actually prefer Victoria’s shorter version, but I do like the print which is odd for me because I normally don’t like prints.

Day 3, October 21st, saw Victoria and Daniel move to Cartagena, Colombia. The couple visited the Agency for Reintegration where they were given information about the activities and met former guerrillas and paramilitaries.

The couple then attended a panel discussion with Swedish companies participating in the Caribbean Maritime Conference – an annually recurring conference during which exhibitors from around the world showcase products for companies in the shipping sector. 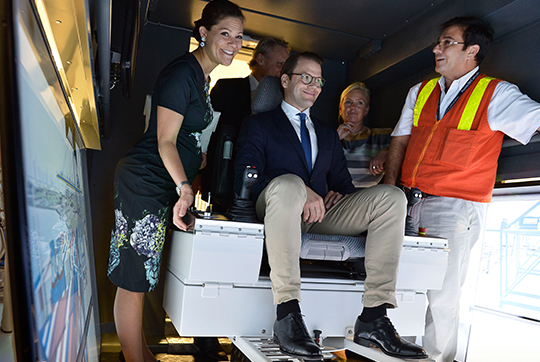 The couple then went on a guided tour of Cartagena’s historic center with the theme “in Adlercreutz footsteps”. In 1820, King Karl XIV Johan sent Fredrik Adlercreutz to Colombia to assist Simón Bolívar in the fight against the Spaniards. Vic and Dan’s tour began at the Plaza Santo Domingo and ended at the Inquisition Museum.

The Crown Princess couple then visited Cartagena’s port where they were given a tour of the area and a newly installed crane simulator for loading and unloading containers. Cartagena’s port is largely equipped with Swedish technology.

The day ended with a reception with the Mayor where Victoria was given the keys to the city.

Victoria wore ASOS Maternity again, this time the “Premium Placed Floral Scuba Midi Bodycon Dress” ($98.53). I like this dress, too. Am I coming around to prints?

For Day 4, October 22nd, Victoria and Daniel moved to Bogota, Colombia where they participated in a roundtable discussion on sustainable business. Victoria gave a speech, saying in part:

“Environment and sustainability are two issues close to my heart. As a swede I’m of course proud of our vast Swedish forests, long coastlines and rich wildlife. And I recognise the same sense of pride in the Colombian people I’ve met, who cherish the Colombian nature and the privilege of living in what is arguably the most biodiverse country in the world. This splendid richness of nature should be treasured by all Colombians, and indeed by all of us.

“Investment and trade are foundations of prosperity and opportunity. Business brings work, innovation and development. But as modern history has taught us, we mustn’t fall for the temptations of short sighted growth at the expense of our long term interests. While limited resources may be depleted to meet our present needs, the resulting consequences to our world may be irreversible.”

In the afternoon, Victoria and Daniel visited the “Ruta Motor” project which is a social program sponsored by the Swedish government which works to give vulnerable young people the opportunity for training and job opportunities in the automotive industry.

Day 4 ended with a reception at the Swedish ambassador’s residence.

For the reception (picture here), Victoria wore another ASOS Maternity dress. The “Midi Skater Dress With Embellishment” ($152.28). Vic carried an Alexander McQueen clutch. I’m not a fan of this dress.

For their final day in South America, on October 23, Victoria and Daniel attended an informal meeting with representatives of Colombian women’s organizations at the NGO ‘Ruta Pacífico de las mujeres’ headquarters in Bogota. The theme was women as agents of peace, and the couple learned about working with female victims of violence and discrimination.

The Crown Princess Couple then visited and were given a guided tour of the Gold Museum – which houses approximately 55,000 objects from the people who lived in Colombia before the Spaniards arrived in the country.

After the visit to the Gold Museum, the Crown Princess couple met with staff at the Swedish Embassy in Bogota. The couple also met the people responsible for the alumni network of Colombians who studied in Sweden and learned about their work to highlight the ability of Colombian students to study in Sweden. The visit concluded with a lunch at the residence with a theme of transport infrastructure.

The photo below is of Vic and Dan arriving for the alumni network meeting. Victoria’s baby bump is clearly visible in her new black and white dress, with a white jacket from Seraphine.

34 thoughts on “Royal Round Up: Crown Princess Victoria and Prince Daniel visit Peru and Colombia”