Queen Elizabeth and Duchess Camilla tiara it up a CHOGM, Prince Harry falls off a polo pony

As I was finishing up this post yesterday, Duchess Kate/KP dropped two new photos of Princess Charlotte on us and that bumped this post to today. Because while Kate garners goodwill by releasing photos of her kids, Prince Harry (and his Ginger Beard) has been in Africa, and Queen Elizabeth II, Prince Philip, Prince Charles, and Camilla, Duchess of Cornwall have all been in Malta for the Commonwealth Heads of Government Meeting. The CHOGM Banquet brought out tiaras from the ladies, and the Sentebale Royal Salute Polo Cup brought out white pants from Harry. We’re starting with tiaras, because priorities.

On Friday, November 27, the royals attended the CHOGM Banquet at the Corinthia Palace Hotel in Attard, Malta. By the way, this is the same Malta which Duchess Kate was supposed to visit but then dropped out of which prompted Prince William to take her place instead of going to a friend’s wedding. Anyhoodles, The Queen and Camilla brought the bling.

The Queen was feeling the emeralds and wore the Grand Duchess Vladimir Tiara with Emerald Drops (which was once owned by Grand Duchess Vladimir of Russia and was bought by Queen Mary in 1921), the Delhi Durbar Earrings and Necklace (which were made for Queen Mary for the Delhi Durbar Indian celebration marking the start of King George V‘s reign), Queen Mary’s Emerald and Diamond Bracelet, and the Order of the Garter Star (Britain). These emeralds are gorgeous.

I thought Camilla looked beautiful, and the pink topaz jewelry was a nice combination for the grey gown. Charles looked really good in his tux, too. That man can wear a tux.

Saturday, November 28, Prince Harry was in Paarl, South Africa for the Sentebale Royal Salute Polo Cup at the Val de Vie Estate. Harry does several polo cups a year in aid of his various charities (as does Prince William), but there is an annual one specifically for Sentebale. This year’s took place during Harry’s tour to Lesotho and South Africa. Harry played against Nacho Figueras, who is a Sentebale Polo Ambassador. During the match, Harry fell off his horse twice. Harry’s team ended up losing 8-7. The Mirror has a video of one of Harry’s falls. I’ve fallen off a horse before and ended up breaking my arm, so it’s lucky Harry wasn’t hurt. 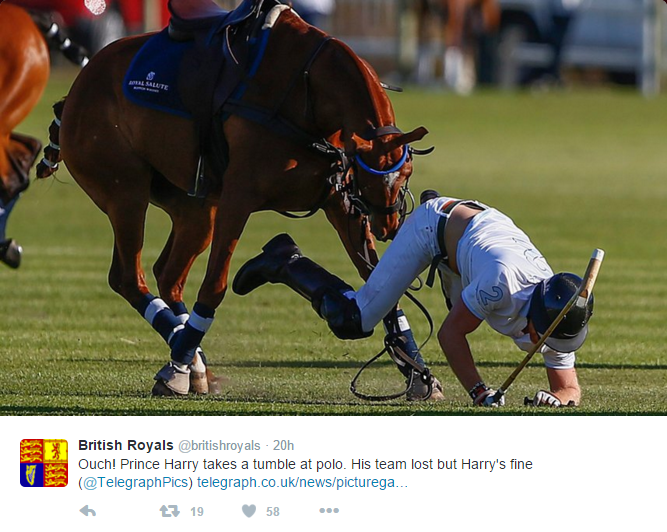 Harry’s Sentebale co-founder, Prince Seeiso, was on hand to present the trophy to Nacho.

80 thoughts on “Queen Elizabeth and Duchess Camilla tiara it up a CHOGM, Prince Harry falls off a polo pony”