Hot Guy (and Girl) of the Month – December: The King and Queen of Bhutan

Hot Guy of the Month Uncategorized
December 2, 2015December 1, 2015 by katemiddletonreview60 Comments on Hot Guy (and Girl) of the Month – December: The King and Queen of Bhutan

I got a request to cover the Queen of Bhutan due to the fact that she announced her first pregnancy recently, so I thought I would take the Hot Gut of the Month series – where I highlight a royal gentleman – and tweak it a bit to highlight a royal lady I have never covered before. And her man can come along for the ride. So the Hot Guy and Hot Girl of December are: King Jigme Khesar Namgyel Wangchuck and Queen Jetsun Pema of Bhutan. PS. My god, can you believe it is December already?! Also, I’ll cover more of Prince Harry’s South Africa tour later this week, possibly tomorrow. 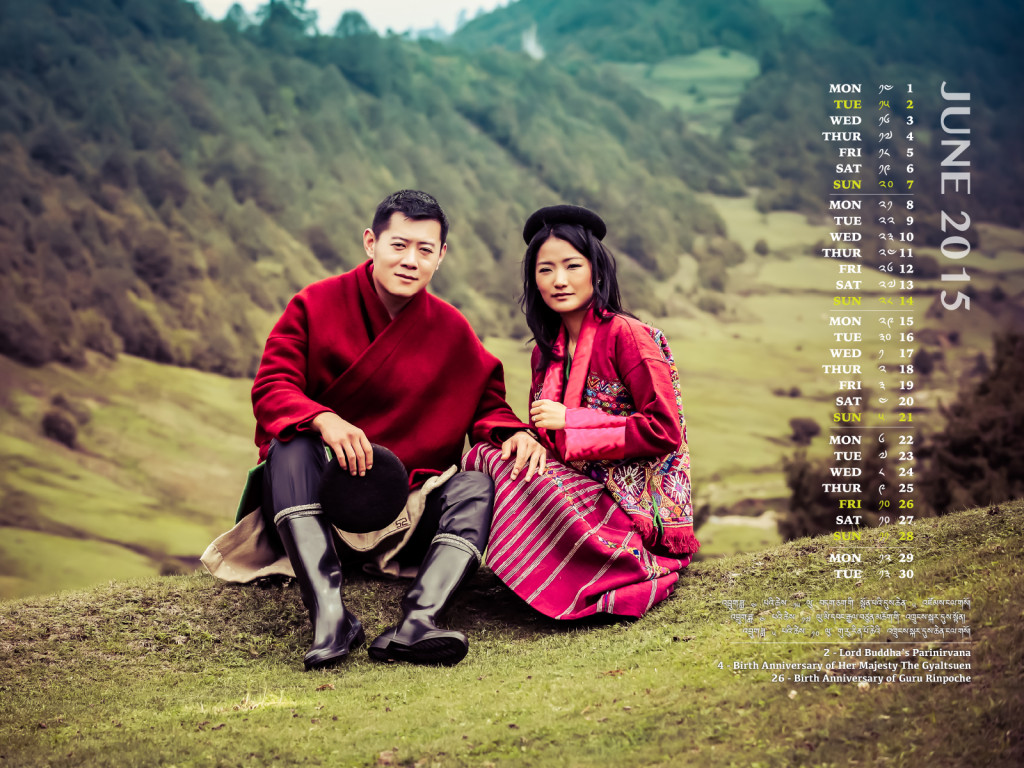 Jigme Khesar Namgyel Wangchuck was born on February 21, 1980 as the eldest son of the fourth Dragon King of Bhutan, Jigme Singye Wangchuck, and his third wife, Queen Tshering Yangdon. Khesar is the fifth and current reigning Druk Gyalpo or “Dragon King” of the Kingdom of Bhutan, having ascended the throne after his father abdicated in 2006. Khesar studied in the United States before graduating form Oxford where he completed the Foreign Service Programme. He gave his first speech to the United Nations in 2002, at 22 years old.

On May 20, 2011, at the opening of the Parliament of Bhutan, Khesar announced his engagement to Jetsun Pema, who was only 20 years old at the time.

Jetsun Pema was born on June 4, 1990 to Dhondup Gyaltshen (the grandson of a former Governor of Trashigang) and Sonam Chuki (who comes from the family of Bumthang Pangtey – one of the oldest noble families of Bhutan). Jetsun Pema went to school in Thimphu (where she was born), India, and London – where she studied international relations with psychology and art history as minors. She was still a student when she became Queen. 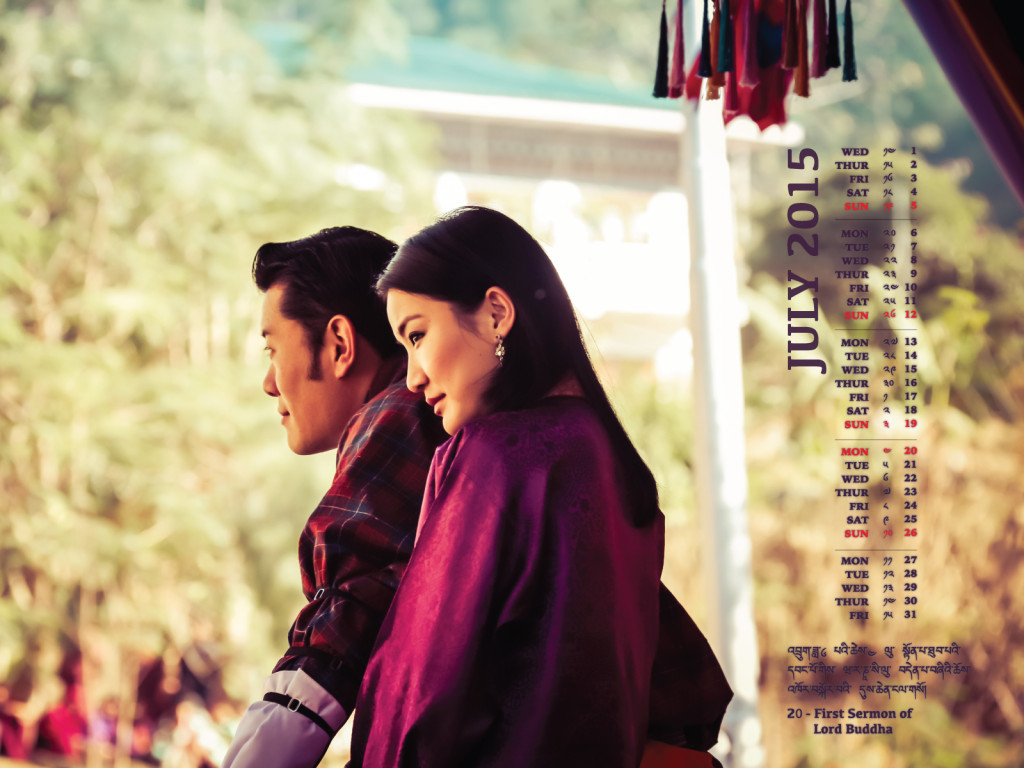 Upon announcing his engagement, the King said of his wife-to-be:

“Now, many will have their own idea of what a Queen should be like – that she should be uniquely beautiful, intelligent and graceful. I think with experience and time, one can grow into a dynamic person in any walk of life with the right effort. For the Queen, what is most important is that at all times, as an individual she must be a good human being, and as Queen, she must be unwavering in her commitment to serve the People and Country.

“As my queen, I have found such a person and her name is Jetsun Pema. While she is young, she is warm and kind in heart and character. These qualities together with the wisdom that will come with age and experience will make her a great servant to the nation.”

The couple married on October 13, 2011 when Jestun Pema was 21 years old and Khesar was 31 years old. The ceremony took place in a 17th-century monastery (Punakha Dzong) in the old capital of Punakha, where Khesar wore the Raven Crown of the Wangchuck Dynasty and bestowed his bride the crown of the Druk Gyal-tsuen and formally proclaimed her Queen of Bhutan. The proclamation was followed by another ceremony. There were public celebrations after the ceremonies. To be honest, all the different ceremonies confused me – there were about four of them plus the public celebrations which took place on the 13th, 14th, and 15th – so I apologize for not going into more detail.

After the wedding, Khesar said of his new wife:

“She carried her responsibilities superbly well. I was very proud of her. She is a wonderful human being. Intelligent. She and I share one big thing in common: a love and passion for art. It doesn’t matter when you get married as long as it is the right person. I am certain I have married the right person.”

Bhutan allows polygamy, and Khesar’s father had multiple wives, but Khesar claims Jetsun will be his only wife.

BTW, public displays of affection are not common in Bhutan but the King kissed his bride in public on their wedding day.

Jetsun is an advocate of environmental issues, the UNEP Ozone Ambassador, and Patron of: the Royal Society for Protection of Nature, the Ability Bhutan Society, the Bhutan Kidney Association, and the Bhutan Kidney Foundation.

The couple announced they are expecting their first child, a son, on November 10, 2015.

The King wrote: “I am deeply pleased to announce that Jetsun and I look forward to the birth of our son in the coming Losar. We are overjoyed to offer this news as a gift to His Majesty’s Birth Anniversary*.”

The Losar is the New Year and is celebrated for 15 days. In 2016, the start of the Losar is February 8th. So Jetsun is due sometime between February 8-22.

*They announced the pregnancy on Khesar’s father’s 60th birthday. 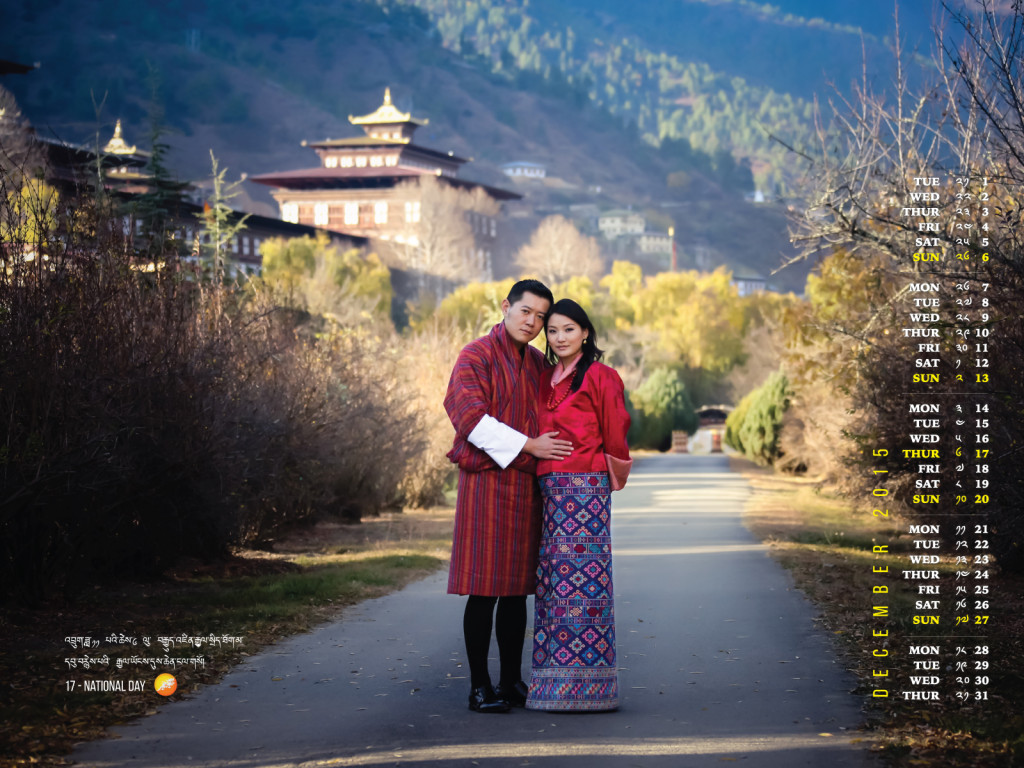 The way Khesar talks about Jetsun is interesting. On the one hand he is very pragmatic, knowing that his wife, as Queen, has certain duties to uphold, but on the other hand he seems to be smitten with her. The best of both worlds: finding someone he truly loves while also finding the perfect Queen? I hope so. She is a very beautiful woman, but damn 21 is young to be getting married to a man 10 years older. And becoming a Queen in the process no less. But I wish them all the best in their marriage and for a safe arrival of their little one. Side note: her wedding outfits just made my top 5 favorite royal wedding gowns.

Here are a few more photos of the couple:

On November 1, 2011, Jetsun attended the New Dehli release of the book Bhutan Through the Lens of the King which is a book of photos by Khesar.

The King and Queen traveled to Japan for a six day visit in November of 2011.

Also in November 2011, the couple traveled to the United Kingdom where they met with Prince Charles and Camilla, Duchess of Cornwall.

In January of 2013, the King and Queen traveled to India.

60 thoughts on “Hot Guy (and Girl) of the Month – December: The King and Queen of Bhutan”