Royal Round Up: King Felipe and Queen Letizia visit USA

Question: How much Letizia do you guys want? Whenever I cover her lately there are a lot of negative comments toward her in the comment section so I haven’t covered her much this summer. So let me know: yay or nay on Leti coverage.

Anyway, I was totally working on this royal round up of Queen Letizia and King Felipe‘s visit to the United States last Friday morning when Duchess Kate decided to visit a women’s prison, and then I didn’t cover Kate and the boys at rugby until Monday, and then Harry made a surprise appearance on Monday that I didn’t cover until Wednesday, so Leti got bumped to today.

Felipe and Letizia were in the US from September 15-18, making stops in Washington D.C. as well as Miami and St. Augustine in Florida.

Felipe and Letizia began their 4-day visit on September 15 with a trip to Mount Vernon, the former home of President George Washington (I guess that’s a thing with visiting royalty, since Charles and Camilla did it, too). Their Majesties laid a wreath at the graves of George Washington and his wife Martha before touring the grounds and meeting volunteers. They also visited the Fred W. Smith National Library for the Study of George Washington which is George Washington’s presidential library. 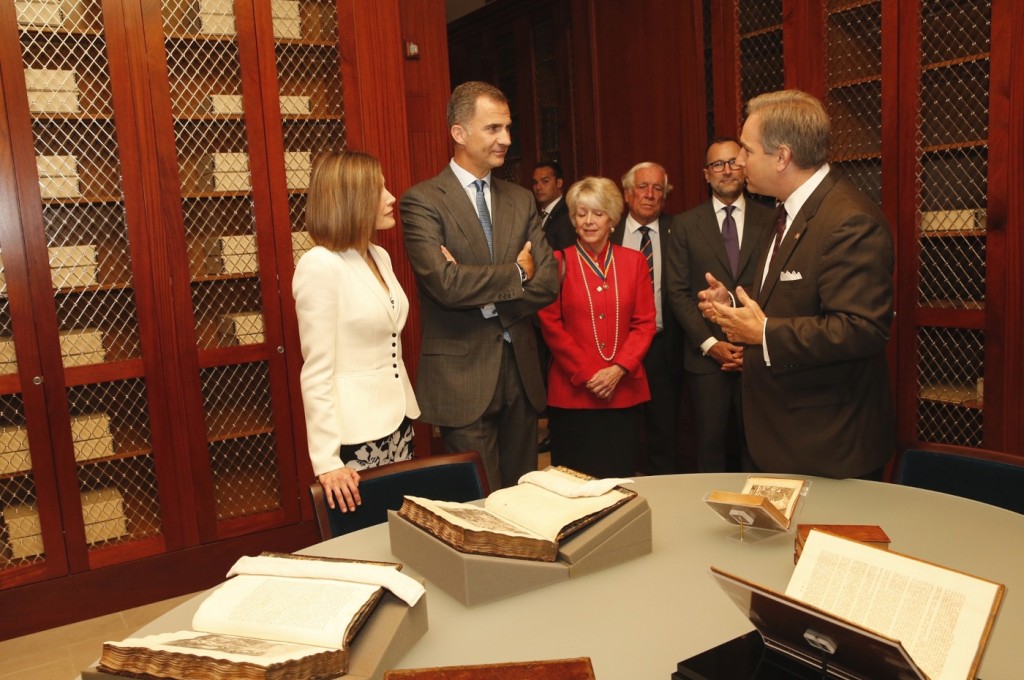 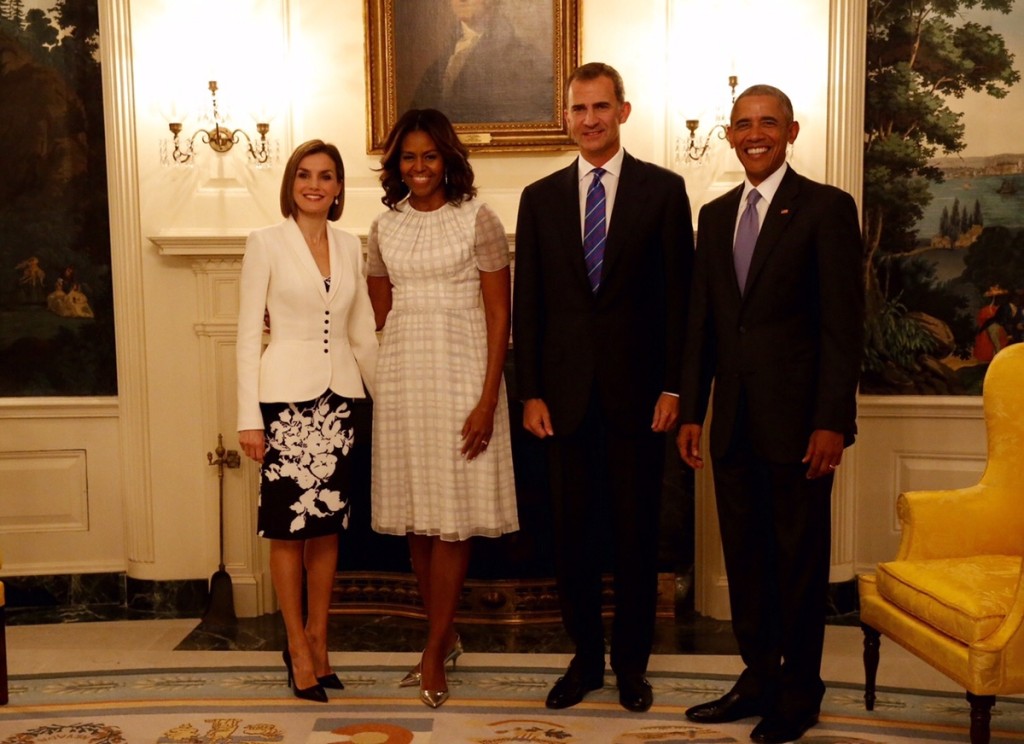 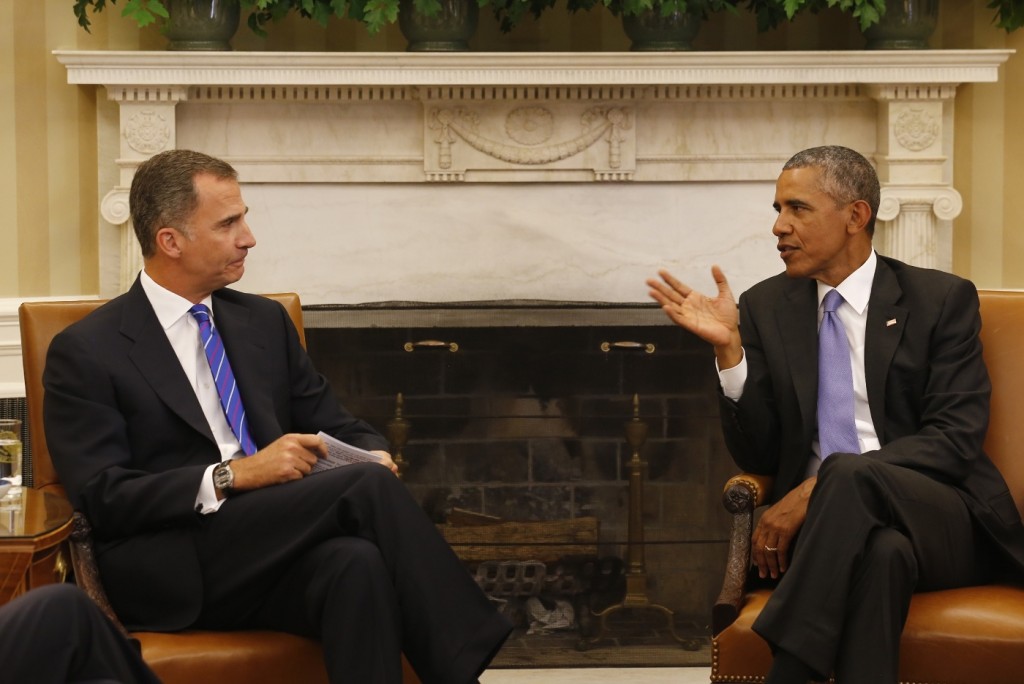 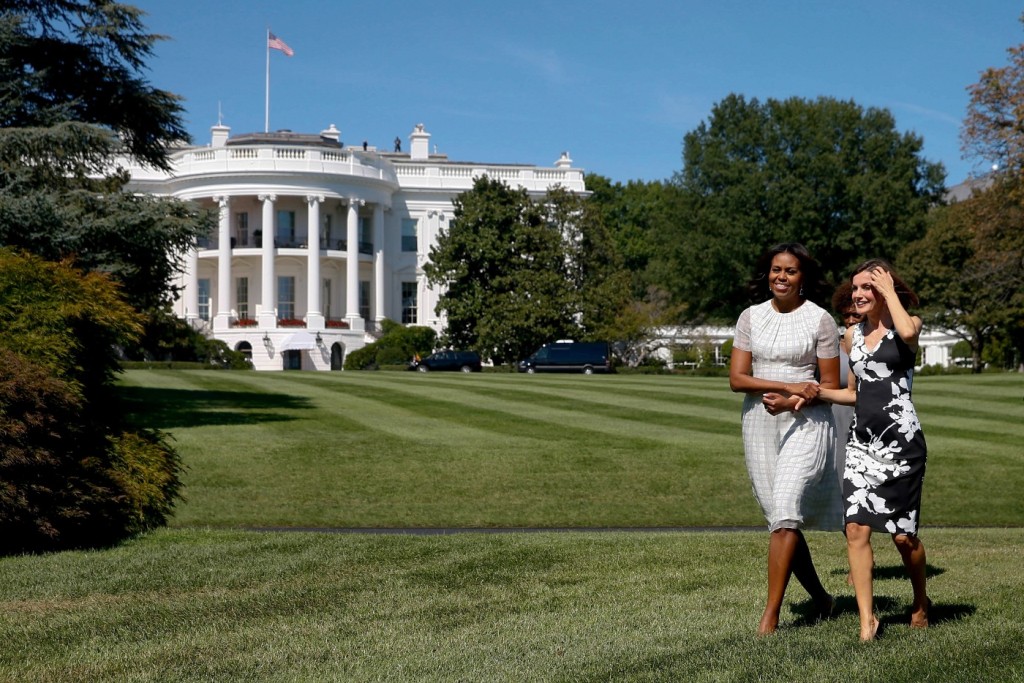 After their meeting at the White House, Felipe and Letizia moved to Capitol Hill for a meeting with the U.S. Senate Foreign Relations Committee.

For the trip to Mount Vernon and the meeting at the White House, Letizia wore a Felipe Varela black and white floral dress from the Pre-Fall 2015/16 collection, a white blazer, Hugo Boss handbag (which retails for £995.00 – holy crap), and Prada pumps. Leti also wore her TOUS pearl drop earrings. 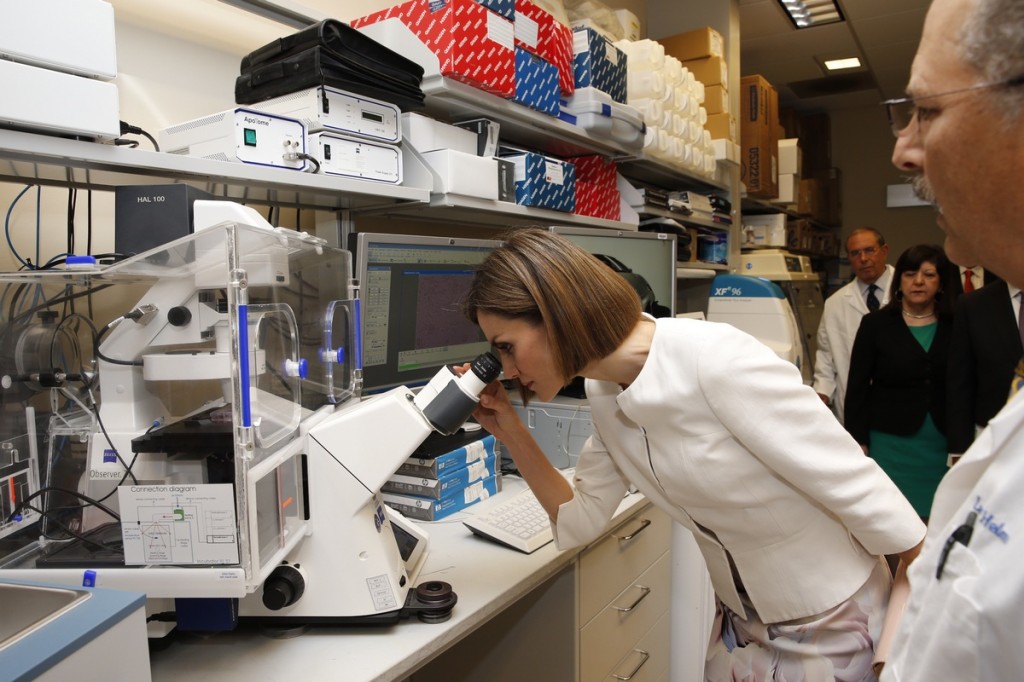 On the morning of the 16th, Felipe held a meeting for Spanish businessmen at the Spanish Embassy, while Letizia toured the National Institutes of Health.

That evening, Felipe and Letizia attended a presentation of the First Meeting of Spanish scientists in the United States at Georgetown University, ending the day with a dinner in their honor at GU. 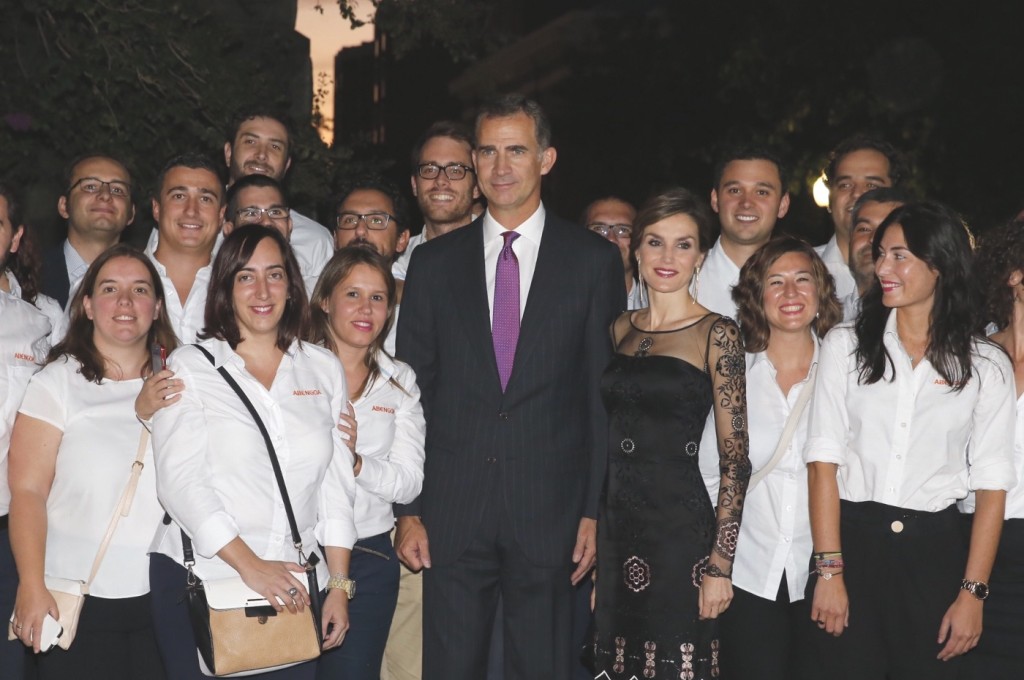 For the NIH visit, Letizia went with a repeated Hugo Boss floral dress she’s had since 2014, wore a Hugo Boss white blazer, her TOUS pearl drops, and Magrit clutch and pumps.

For GU, Leti wore an embroidered black cocktail dress from Felipe Varela. The Prada black pumps made a reappearance and she carried a Felipe Varela clutch. Leti wore gold chain earrings from Mango which cost $19.99. I guess she went with cheaper earrings to make up for that super expensive handbag from the day before?

September 17th saw Felipe and Letizia head to Miami, Florida. They visited Miami Dade College where Felipe gave a speech to inaugurate the 2015-16 school year. They ended the day at the Olympia Theatre in Miami for a screening of Candida at the Spanish Film Festival “Recent Cinema from Spain”. 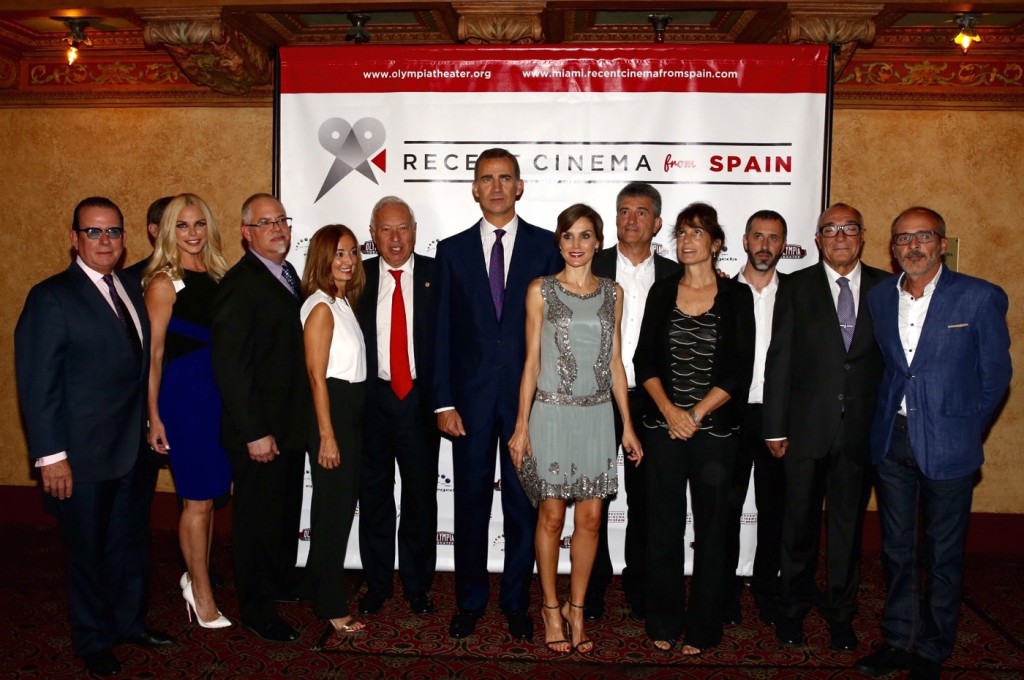 I can’t decide if I like this dress on Leti or not. I like the dress on it’s own, but it seems out of character for Leti.

September 18th saw me very annoyed that I didn’t know ahead of time that Felipe and Letizia would be in St. Augustine. It’s not that long of a drive from me and I totally could have gone to St. Augustine that day. But alas, that didn’t happen.

Felipe and Leti were in the city to mark the 450th anniversary of its founding. St. Augustine is the oldest continuously occupied European-established settlement in the continental United States and was founded by Spanish admiral Pedro Menéndez de Avilés on September 8, 1565.

Felipe and Leti started their day at the Castillo de San Marcos (which I’ve been to, it’s pretty cool if you like historical sites) before moving to the Government House where Felipe gave a speech on the balcony. They visited the Cathedral Basilica of St. Augustine before heading to Flagler College for a lunch held in their honor. 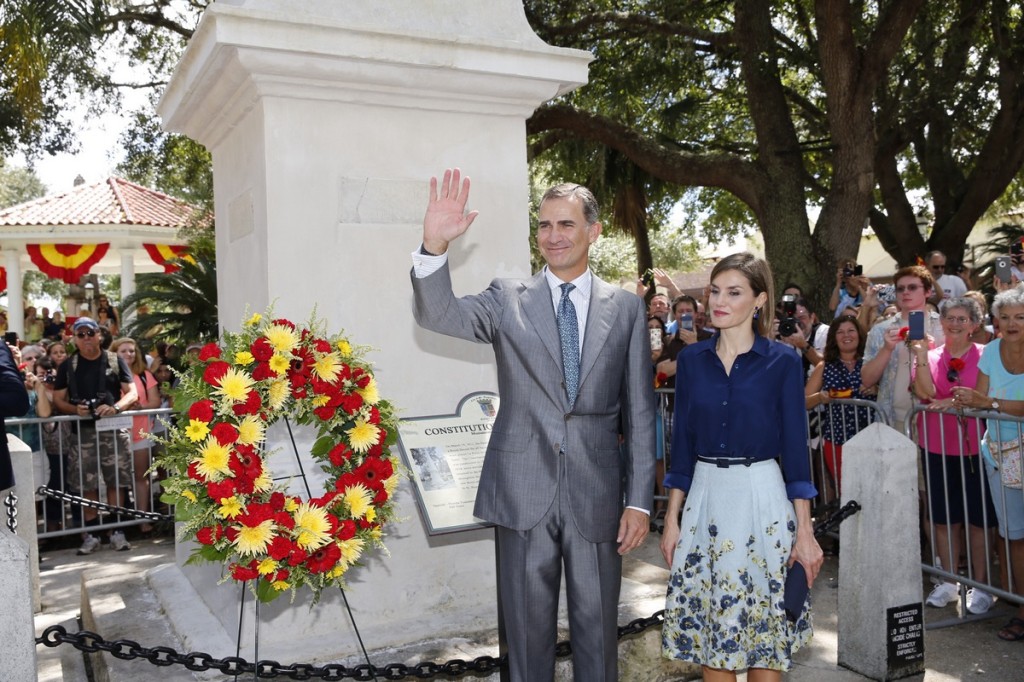 In the evening, they returned to Flagler College to attend the inaugural dinner XX Spain-US Forum, organized by the Spain-United States Council Foundation and its American counterpart, the United States-Spain Council. 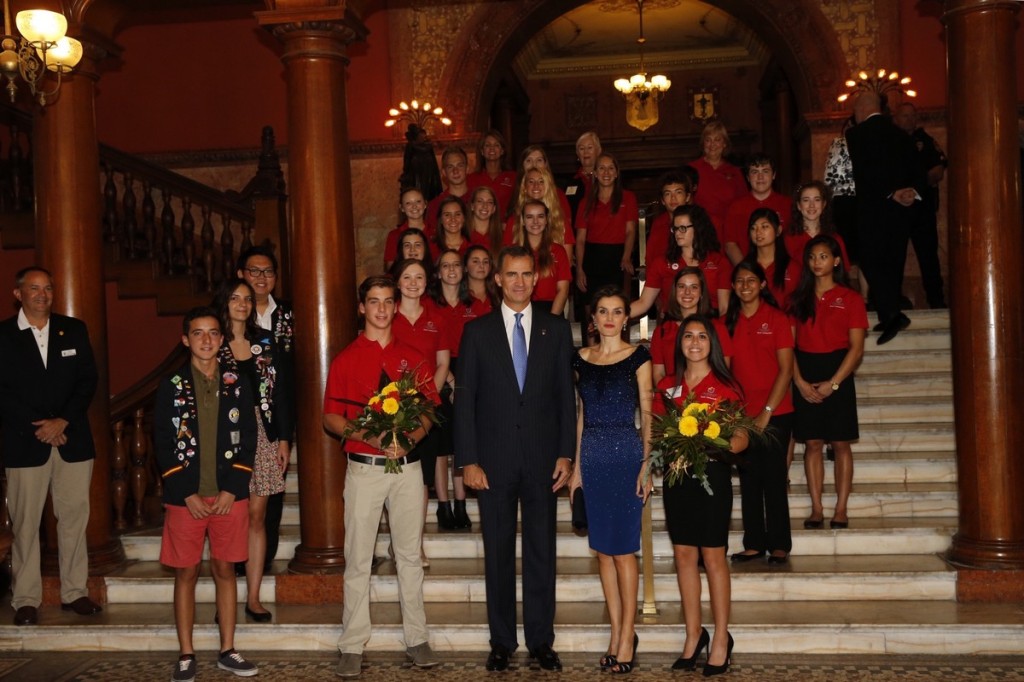 For St. Augustine, Leti wore her navy button-down shirt, Carolina Herrera “Flower Fil Coupe Party Skirt” ($2,490.00), and Carolina Herrera navy heels from the Spring 2015 collection combo she wore back in May with a navy Felipe Varela clutch and her TOUS blue hydrothermal quartz and amber earrings.

39 thoughts on “Royal Round Up: King Felipe and Queen Letizia visit USA”