On Monday, September 28, Prince Harry made a surprise visit to The Duke Of York’s Royal Military School in Dover to present medals and inspect the parade. Harry wore his Blues and Royals ceremonial uniform and sported The Ginger Beard. I don’t know how long The Ginger Beard is going to last so we must enjoy it to the fullest while we still can.

UPDATE: Harry joined the Walking with the Wounded walk today. Pics at end of post.

The school was founded in 1803 by Frederick, Duke of York, to educate the orphans of soldiers. It came under scrutiny for mistreatment of pupils in recent years but the investigations were dropped. Apparently, Kensington Palace officials seemed unaware of the controversy before Harry arrived.

Harry agreed to be the guest of honor at the parade as part of his efforts to support military families – 65% of pupils at the school have parents in the armed forces – and after a request from Simon Daglish, the co-founder of Walking with the Wounded (which Harry has supported and taken part in several times), who has a son at the school. Harry spent two hours chatting to pupils and staff at the school.

BTW, Harry was sporting his Royal Victorian Order he received earlier this summer from the Queen.

Only one of the school’s 406 pupils knew about Harry’s visit before he arrived and some of the girls got a bit giddy after Harry talked to them. 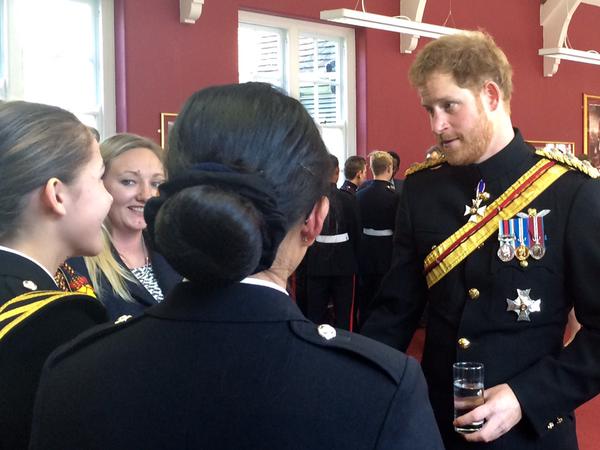 PS. In some clean up from the last few days, the photos of Prince George and Princess Charlotte published by Woman’s Day has been removed from their website. The article I linked to in my article on Monday now redirects to an article with official photos from Charlotte’s Christening. Hrm… Did KP get to them and have them take the photos down?

The State Visit from China will take place from October 20-23. It has not been confirmed if William and Kate will attend the State Banquet, or participate in the visit in any way.

UPDATE: Prince Harry joined the Walking with the Wounded Walk of Britain today. Harry joined a team of six injured service personnel for a 17 mile trek from Shrewsbury to Ludlow.

Harry spoke with ITV News about mental health, saying: “Mental health is a sensitive subject amongst a lot of people but it doesn’t need to be. We need to talk to about it more, get rid of the stigma.”

Harry’s part in the walk was not very media friendly. There were very few royal photographers allowed and there was an embargo placed on his appearance until 1:30 pm (UK time). But Twitter was abuzz with pics of Harry, and Hello (among other media outlets) broke the embargo, as did Harry’s patronage The Endeavour Fund.

Mark Cuthbert, royal photographer, was not happy about it and Tweeted about the lack of access to the last few engagements by William, Kate, and Harry.

And of course our favorite Twitter-ranter, Richard Palmer, had things to say about the whole thing. 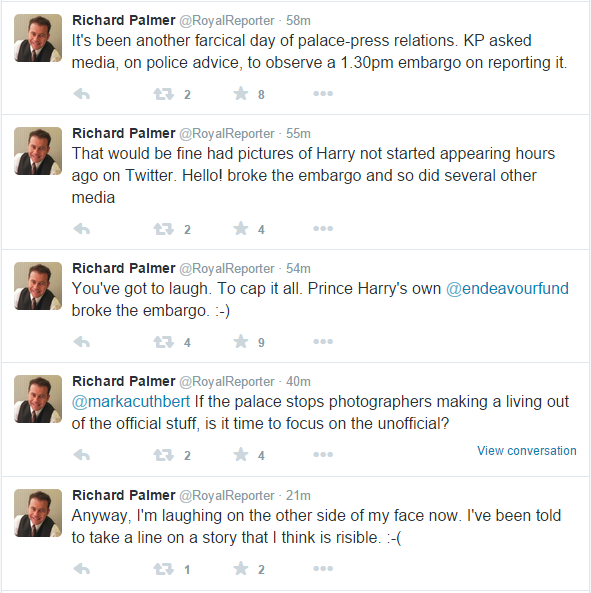 The KP press office seems to want to do a lot of their own promotion of events these days. And while I think it is a good thing for KP to promote their things via social media, they can’t rely only on social media. Their social media only reaches so far and that won’t go the distance like traditional media. I think it will backfire on KP if they continue to cut out the press.

Oh, and guess who was one of the few photographers allowed to photograph the Walk today? Chris Jackson. That’s right, Duchess Kate’s assistant Natasha Archer‘s boyfriend. Of course he got the nod.