This week’s Royal Round Up includes someone we haven’t talked about in a while, Queen Letizia, dolling it up in a tiara. It also includes photocalls from Queen Maxima and Queen Mathilde and theirs families; Princess Charlene celebrating Prince Albert‘s 10 year anniversary; and the Battle of Britain flypast and the 7/7 commemoration.

I’ve been meaning to cover Queen Letizia for a while, and have even written up posts on her, but then they kept getting bumped for other things. The last time I covered Leti was, oh boy, May 25. She’s been busy since then and I haven’t gotten around to her, but this week she was all “bam tiara, don’t bump be again”, so I was like “okay”. So I’m covering the State Visit to Spain from Peru. I’m just covering the State Visit in this post. I’ll do some catch up posts later for all her other stuff. 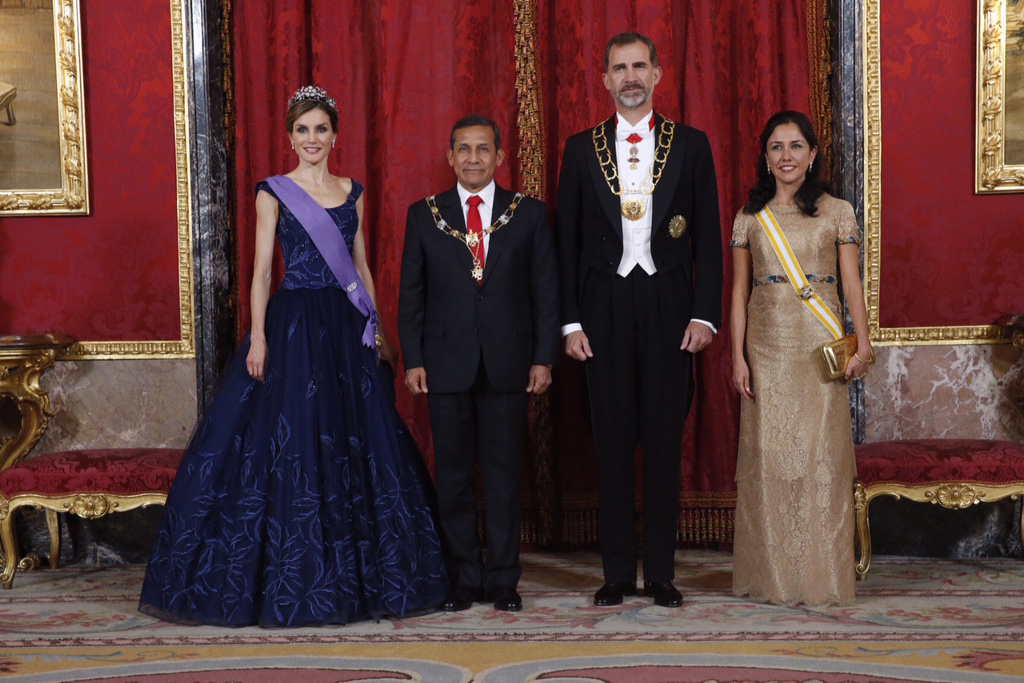 The President of Peru and his wife paid a State Visit to Spain on July 7 – 8. On the evening of July 7, King Felipe and Queen Letizia held a State Banquet in their honor. Representatives of state institutions and business, cultural, and economic spheres and the media from both countries also attended the banquet.

Letizia brought the ballgown realness in this new Felipe Varela midnight blue tulle ballgown embroidered with crystals in the shapes of leaves. Letizia wore the Spanish Floral Tiara and her wedding earrings along with the Grand Cross sash and metal of the Order of the Sun (Peru).

She looks amazing, right? This is what you imagine when you think of royalty.

Earlier in the day on July 7, the official welcome ceremony for the President of Peru was held at Royal Palace of El Pardo. Letizia went with white Hugo Boss separates: a white top and white pencil skirt. She went with nude Magrit heels and clutch, and TOUS freshwater pearl drop earrings. 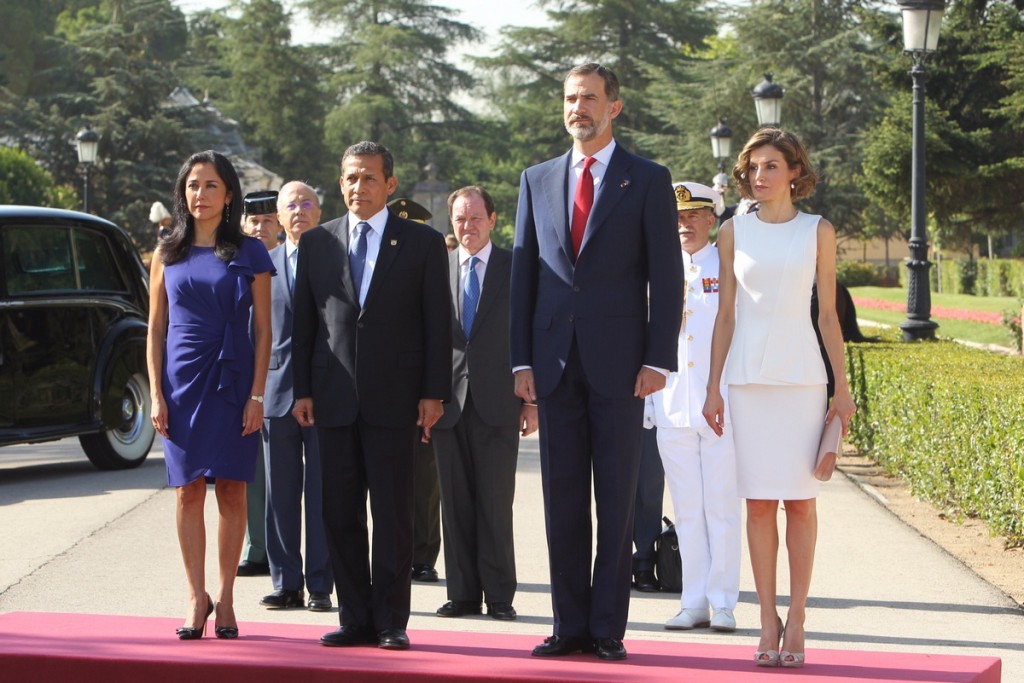 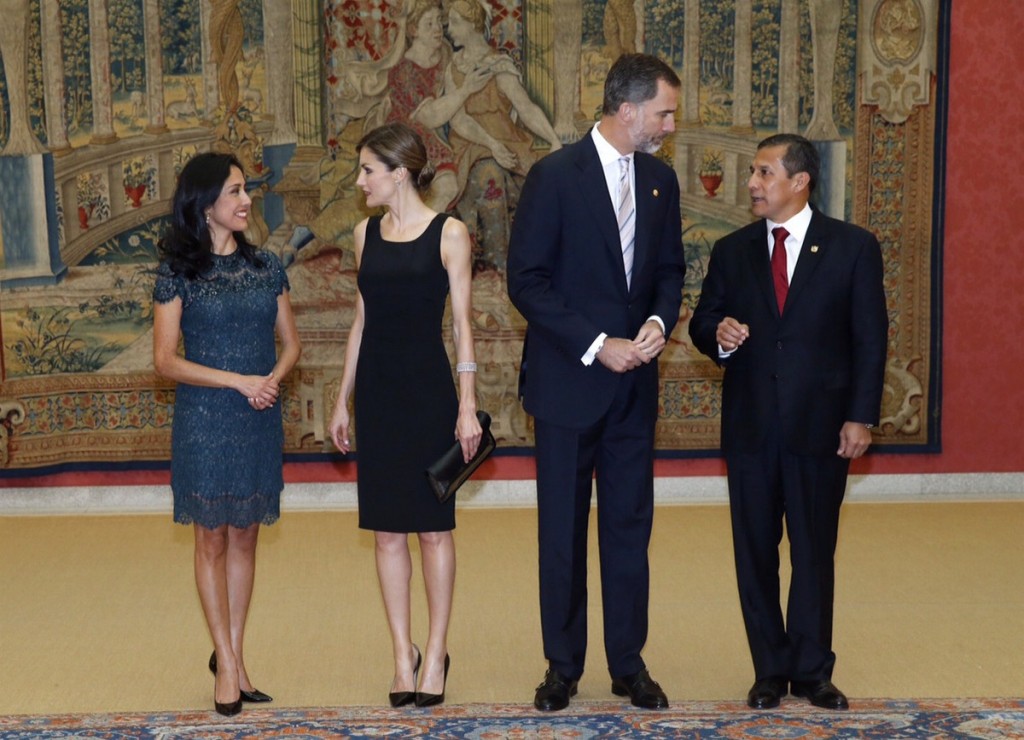 On the evening of July 8, the President of Peru and his wife held a reception for the King and Queen at the Royal Palace of El Pardo. Letizia went with Felipe Varela again, this time repeating a black cocktail dress she previously wore in 2013 and 2014. It looks like a simple black dress from the front, but the back is actually sheer with a floral motif embellishment. Leti went with a Hugo Boss clutch and Prada heels, beautiful diamond earrings and her Cartier column bracelet. 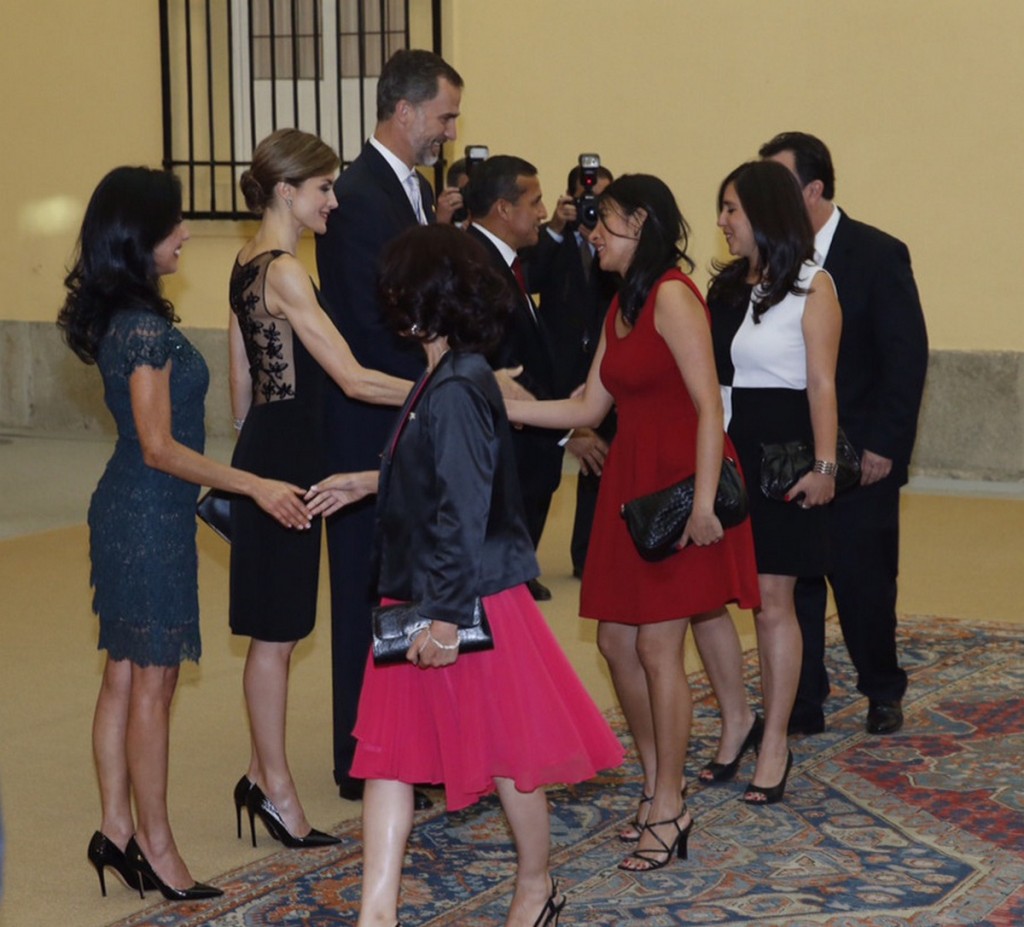 King Willem-Alexander, Queen Maxima, and their three daughters – Princess Amalia, Princess of Orange; Princess Alexia; and Princess Ariane – held a photocall on the beach in Wassenaar, Netherlands with their dogs on July 10. This is a lovely family photo op with the Dutch Royal Family, and I love that they included their dogs.

Interestingly, these photos were taken the day after Prince William and Duchess Kate released Princess Charlotte‘s christening photos, and what a stark contrast there is. I understand releasing official portraits, and I think William and Kate should still do that, but I hope at some point in the future the Cambridges start doing these types of photocalls. It would be fun to see Prince George interact with his sister.

Speaking of photocalls, the Belgians did one of their own. The Belgians held theirs at Pairi Daiza animal park in Cambron-Casteau, Brugelette, Belgium on July 11. King Philippe, Queen Mathilde, and their four children – Princess Elisabeth, Duchess of Brabant; Prince Gabriel; Prince Emmanuel; and Princess Eleonore – visited the animal park and played with some lemurs and feed some elephants.

Prince Albert celebrates 10 years on the throne of Monaco this year. The first day of celebrations was yesterday, where a crowd gathered outside the Prince’s Palace of Monaco and Prince Albert gave a speech. Shocking everyone, including her husband, Princess Charlene gave her first ever speech in French, saying in part: “Albert I was the Explorer, Rainier III was the Prince-Builder, and you are the Prince of Hearts, of my heart.” [People]

Prince Jacques and Princess Gabriella did not come down to the square for the celebrations due to the sun, but they did appear on the balcony. Jacques wore white and Gabriella wore a little pink patterned dress; both were held by their nannies. As part of the celebrations, Albert and Charlene received baptism gifts for the twins from the citizens of Monaco. Gabriella received a 1925 Cartier belt buckle brooch, and Jacques received a Cartier tank watch.

Here’s another picture of the babies.

On Tuesday, July 7, Prince William attended a memorial in Hyde Park to commemorate the 10th anniversary of the 7/7 London bombings – showing his human side for once, hugging one of the youngest survivors, Emma Craig, after she gave a speech, saying in part: “[The terrorism attacck] may not have broken London, but it did break some of us. Sometimes I feel that people are so hell bent on saying terrorism not breaking us that they forget about all the people who got caught up in it.”

On the morning of July 7, 2005, four suicide bombers attacked civilians using public transport – three simultaneous attacks to the London Underground, and one on a double-decker bus – killing 52 people and injuring over 770 people.

On Friday, July 10, The Queen, along with Prince Philip, Prince William, Prince Edward, and Sophie, Countess of Wessex, among others, commemorated the 75th Anniversary of The Battle of Britain with a flypast over Buckingham Palace. The Battle of Britain was a World War Two (WWII) air campaign waged by Germany against the United Kingdom in the summer and fall of 1940. It was the first major campaign fought entirely by air forces with the Nazis hoping to gain superiority over the Royal Air Force (RAF). The decisive Allied victory of the Battle of Britain was Germany’s first lost during WWII.

After the flypast, Philip, William, Edward, Sophie, and others attended a reception for the six remaining Battle of Britain veterans at the RAF Club. During the photo-taking portion, Philip, in all his Philip grumpiness, told the photographer, “Just take the ****ing picture”. Sigh, oh Philip.