Royal Round Up: The British, part 2

British Royals Fashion Jewelry Prince Harry Sophie Countess of Wessex
May 19, 2015May 19, 2015 by katemiddletonreview46 Comments on Royal Round Up: The British, part 2

This royal round up features three members of the British Royal Family: The Queen, Prince Harry, and Sophie, Countess of Wessex. There will be a part 3 later in the day that will feature Camilla, Prince William, and others. I couldn’t fit everyone into one post – it just got too long.

We’ll start with the Queen, because, well, she’s the Queen. Queen Elizabeth attended the VE Day 70th Anniversary Service of Thanksgiving at Westminster Abbey on Sunday, May 10. Prince Philip, Duke of Edinburgh attended as well – you can kind of see him in the background of this pic.

The Queen and Prince Philip hosted the first (of three) Garden Party of the year at Buckingham Palace on Tuesday, May 12. HM wore lovely pale yellow and her Scallop Shell Brooch. Phil looks like the Penguin with his top hat, tails, and umbrella.

The Queen attended the Chelsea Flower Show, as she does every year, at Royal Hospital Chelsea yesterday, May 18. HM wore a blue Karl Ludwig coat, which she previously wore to royal ascot in 2013, and an Iris brooch.

The Prince Harry Review continues! Prince Harry just got back from his hugely successful tour of New Zealand and darted on over to his Sentebale garden at the Chelsea Flower Show yesterday. This year’s Sentebale garden is called ‘Hope In Vulnerability’ and was inspired by the Mamohato Children’s Centre in Lesotho. 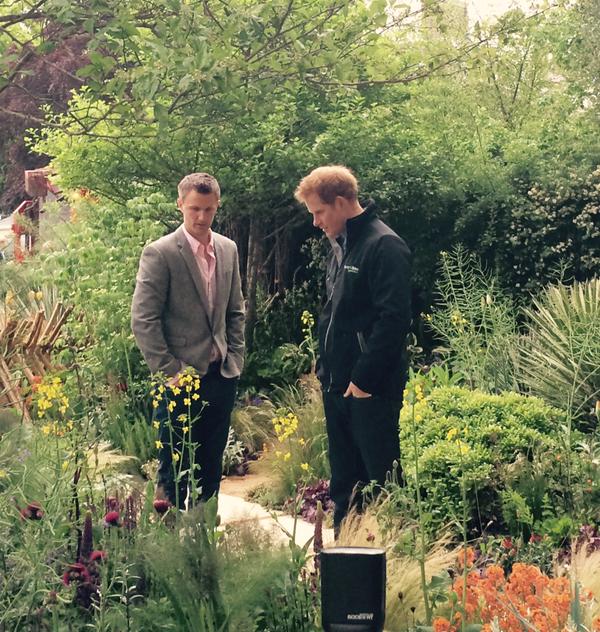 Here’s Harry visiting another exhibit. I love that they used robotics!

Harry giving the Queen a kiss as she arrives. Harry showed HM, Philip, Prince Charles and Camilla, Duchess of Cornwall around his garden.

Close up of Harry’s face because why not.

On Tuesday, April 28, Sophie, Countess of Wessex attended a reception for the London College of Fashion at St James’s Palace. Sophie wore her Victoria Beckham “Cap Sleeve Embroidery Fitted” dress she previously wore to a Buckingham Palace reception back in February. Sophie gave a speech. This was before Princess Charlotte was born and Sophie mentioned hoping the baby would be a girl. I guess she got her wish.

Sophie did not attend the VE Day Service of Thanksgiving because she was in the Channel Islands (Guernsey and Jersey) where she read two messages from HM. Go here for lots more pics of Sophie from that day. Sophie wore a green version of the Suzannah Silk Gazar 1950s influenced Midi dress (£2,350.00). Sophie wore ruby earrings borrowed from the Queen. The colors are symbolic for the places she visited: Green for Guernsey and red for Jersey. I’ve noticed that Sophie wears a lot of black, so it’s nice to see her in a different color than she normally wears. Different silhouette, too. It looks good on her. 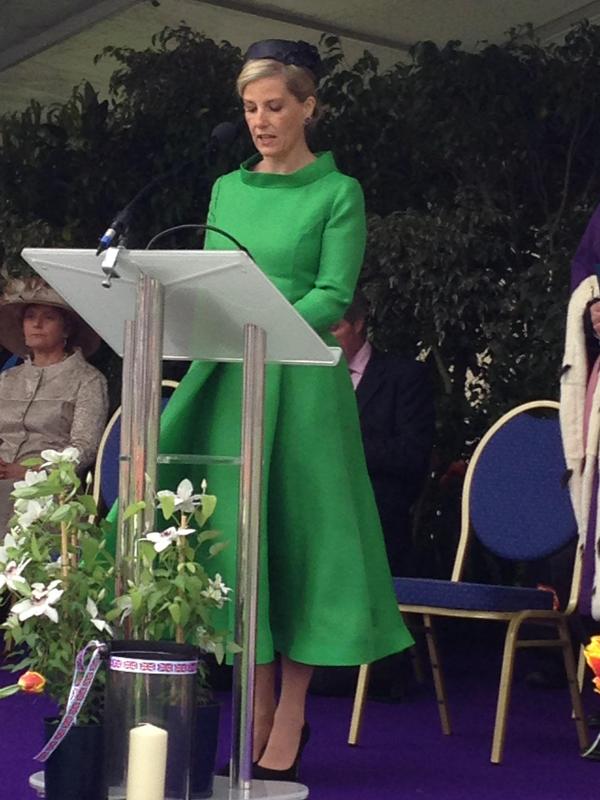 Sophie visited the new Thames Valley Air Ambulance base at RAF Benson on Monday, May 11 in Benson, England.

Sophie attended the Buckingham Palace Garden Party on Wednesday, May 12. This hat reminds me so much of Duchess Kate‘s Jane Taylor hat she wore in Belgium in August 2014.

On Thursday, May 14, Sophie attended a performance by Ballet Central to mark their 30th anniversary at Corn Exchange.

Sophie attended the the Royal Windsor Horse show with the Queen.

Sophie with her daughter, Lady Louise Windsor, on day 4 of the Royal Windsor Horse Show. Louise is getting so big. So was so young just four years ago when she was a bridesmaid at Will and Kate’s wedding.