Let’s start our Grand Tiara Tour of Europe in Spain where King Felipe and Queen Letizia welcomed the President of Colombia and his wife, José Manuel Santos Calderon and Maria Clemencia Rodriguez de Santos. On Monday, March 2, their majesties hosted a gala dinner at the Royal Palace of Madrid in honor of the President of Colombia and his wife. Letizia joined the All Lace Dress Club wearing a pearl grey Felipe Varela gown featuring a lace overlay with tiny crystals all over and sheer sleeves. Her matching shoes and bag were from Magrit. She previously wore this dress to the April 2013 inauguration of King Willem-Alexander.

Letizia opted for the Floral Tiara, a diamond tiara set in gold and silver with a floral motif of flowers, leaves, and berries. Letizia received a brand new order: Dame Grand Cross of the Order of Boyaca (Colombia). That’s the sash and gold pin she’s wearing. Leti wore a diamond brooch in the shape of a Fleur de Lys (which is actually the centerpiece of the Fleur de Lys Tiara), and her diamond earrings that she wore for her wedding.

Out of all of the ladies in the All Lace Dress Club, Queen Letizia looks the best. The lace doesn’t age her at all, it’s in a great color, and of course the tiara doesn’t hurt. She looks fantastic.

Next on our Tour, we jump across the channel to Great Britain, where Queen Elizabeth and Prince Philip welcomed the President of Mexico and his wife, Enrique Pena Nieto and Angelica Rivera. On Tuesday, March 3, the Queen and Duke of Edinburgh held a State Banquet at Buckingham Palace in honor of the President and First Lady. The Queen opted for her usual State Banquet uniform of an embellished, long-sleeved white gown.

The Queen wore Queen Alexandra’s Kokoshnik Tiara – a fringe tiara done in the traditional Russian kokoshnik style that was a silver wedding anniversary gift to the future Queen Alexandra, wife of King Edward VII. HM wore a diamond fringe necklace and the Grand Collar of the Order of the Aztec Eagle (Mexico).

As much as I love the Girls of Great Britain and Ireland tiara, I’m glad HM wore something different – it’s fun.

Silvia wore a red gown with tiers of ruffles and crystal embellishments on the sleeves. Silvia wore the Leuchtenberg Sapphire Tiara, necklace, and earrings. She wore the Grand Cross with Collar of the Order of the White Rose (Finland). 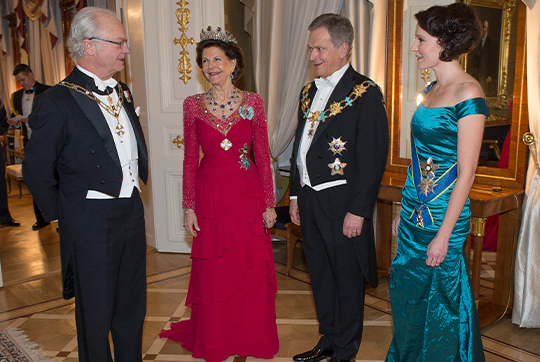 Even though these royal ladies gave us some great tiara p0rn, I must say my Best Dressed of this Grand Tiara Tour of Europe is actually a tiara-less, non-royal lady: The First Lady of Mexico, Angelica Rivera. She looked absolutely flawless in a gorgeous, one-shoulder red gown with a cape to the State Banquet at Buckingham Palace.