Kate Middleton spotted at Goring Hotel for their 105th anniversary

Yesterday, Kate Middleton attended a lunch at the Goring Hotel to mark it’s reopening after some renovations and it’s 105th anniversary. She was there having received a private invitation. This was a private visit and not a part of her official duties. As we know, the Goring Hotel is where Kate and the Middletons stayed the night before Kate’s wedding to Prince William on April 29, 2011.

Kate wore a pink and purple floral dress from Erdem, the “Darla”, from the Resort 2013 Collection, which retailed for $1,518. The dress is NOT maternity wear. The dress also features a cut-out back. There are no pictures of the back of Kate’s dress, but because she is almost eight months pregnant and she most likely wouldn’t go for a cut-out back in general but especially when she’s pregnant, I am inclined to think this is a bespoke version of this dress. I’m thinking the dress would have been altered to accommodate her pregnancy belly (because if she wore a non-maternity dress in a size large enough to accommodate her belly, the seems at the shoulders would not be on the shoulder because the top would be far too big, and that’s not the case with this dress), and to close up the cut-out in the back. It’s possible, since it’s from the 2013 collection, that Kate has had this dress since when she was pregnant with George and we’ve just never seen it. Either way, Kate’s dress would have cost way more than the $1500 original retail price. 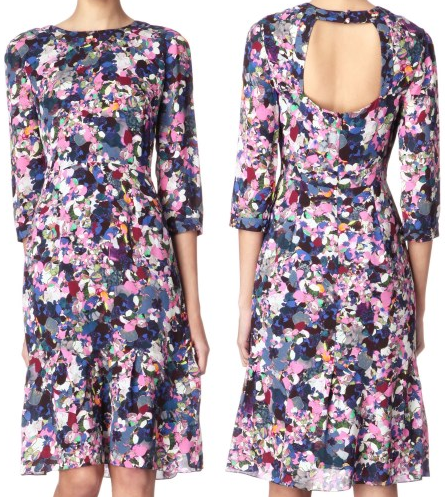 Finally! HQ photo of the #DuchessofCambridge today via @MailOnline pic.twitter.com/gX3xg7n70o

Kate will be back to “work” next Monday for the Commonwealth Service at Westminster Abbey.