I want to mention something before I proceed. I love when I can find quotes from the royals and print them; however, with the European royals, when they are not speaking English, there is that language barrier there. I use Google Translate to translate the quotes into English and sometimes it doesn’t always work out well (Google is much better at translating, say, Spanish than Swedish). It’s usually easy to pick out the basic meaning of what’s being said, but it reads like non-native English. I just want you guys to be aware that the quotes may sound off, but that’s because of the translation from Google not because of the royal who said the quote. I know we get on Kate for not always speaking articulately, and I don’t want my lack of ability to accurately translate these quotes to affect our views of the European royals. So with that said, onto the royal tour…

Victoria and Daniel landed at the Incheon International Airport in Incheon, South Korea on Monday, March 23. Surprising everyone, Victoria actually wore her hair down – it’s the first time she’s worn her hair down in public in something like four years. I think she looks really pretty with her hair down. Victoria wore an all black ensemble of a blazer, trousers, peter pan collared sweater, and booties. From the side, she looks great. And then you get to the straight on photo…

…and you realize that not all clothes stand up to intense camera flash. It’s so important for royals and celebs to test their clothes to see how they hold up to the flash of cameras. Victoria didn’t let this mishap faze her, though.

Here’s some Daniel; I know he’s a favorite.

Victoria and Daniel traveled to the town of Panmunjom on the border between North Korea and South Korea. Since 1953, this has been the home of the Neutral Nations Supervisory Commission (NNSC). There are currently five Swedish officers serving at the NNSC. Victoria and Daniel toured the demilitarized zone and met the five serving officers who told them about the important role Sweden plays in the Korean Peninsula.

Of her visit to the North/South Korea border, Victoria said: “It is huge to be in this place. There’s a line on the ground that divides a whole country and so many families…It’s a great trauma to both countries and to the Korean people.”

In the evening, Victoria and Daniel had dinner in Seoul. The dinner was organized by Business Sweden and the Swedish Chamber of Commerce in Korea, and the Crown Princess couple were joined by representatives from Swedish Companies in Korea. Dr. Choi Byung-il, a professor at Ewha Woman’s University, spoke about the economic challenges Korea faces – one being that many Korean companies create more jobs overseas than they do in South Korea, and how entrepreneurship is an important factor in driving the economy forward. 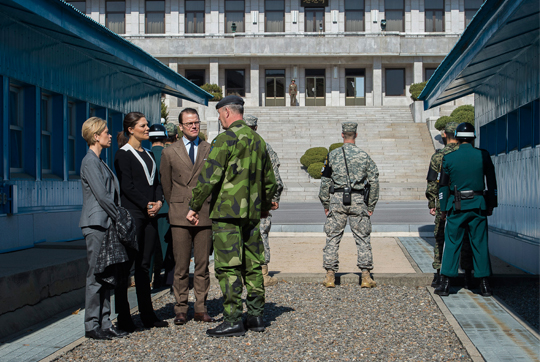 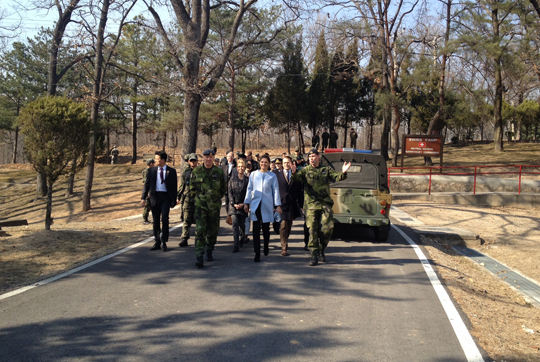 Day 2, Tuesday March 24, started with a visit to the Green Climate Fund in Incheon. The Fund was established by the UN Climate Conference with a mission to support developing countries through actions for climate change adaptation and reduction of greenhouse gas emissions. One of their meetings was on Tuesday, and Victoria and Daniel attended, where the topic was the Fund’s work and the ongoing negotiation process that they hope will result in a legally binding agreement on emissions limitations. 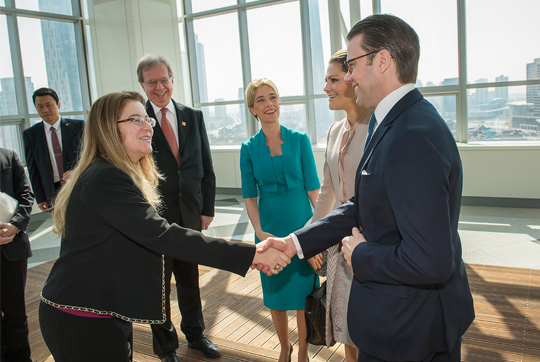 [The women in green is totally wearing the green version of Kate’s blue LK Bennett “Detroit” dress; Victoria also has the dress in white – this dress is so popular!]

Park started by welcoming the couple, saying in part: “The Korean people has fond memories of how Sweden over the last 60 years, every part of the Commission, which oversees the truce agreement for peace and stability on the Korean Peninsula.”

Victoria thanked the president, saying: “Thank you for your warm words. Sweden and Korea have a long and close relationship and I see this trip as an opportunity to further deepen the relationship.”

Park later praised Victoria and Daniel’s equal parenting style, saying: “I hear you have both spent time at home with the little Princess Estelle after she was born and that sets an example… I know that you take a great interest in social welfare questions, women’s issues and childcare. And Sweden is ranked as the world’s leaders in family issues and equality.” 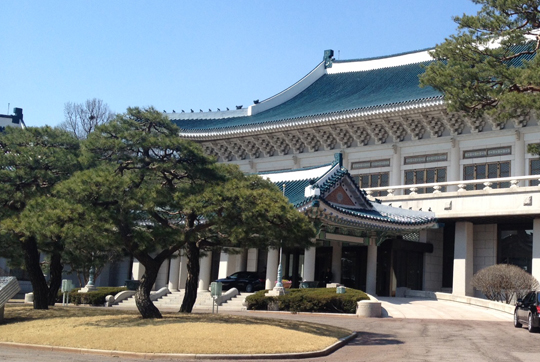 Victoria and Daniel then visited the Memorial Tower of the National Cemetary (where over 173,000 people are buried). The Crown Princess couple took part in a wreath-laying ceremony complete with incense burning and a moment of silence.

Quick moment for fashion: Victoria looked very pretty in shades of pink with a flower in her hair in a coat by Swedish designer Fadi El Khoury and a skirt by Danish designer By Malene Birger. Her earrings are from Swedish label Kreuger Jewellery, the Poppy Earrings with Diamonds. They sell for 44700 SEK, which coverts to about 5,265 USD. The earrings are 18k rose gold with diamonds totaling 0.80ct (2 x 0.40ct). My how expensive.

Anyway, Victoria made an outfit change for her next stop. Changing into a different pink dress, this one by Dolce & Gabbana that she previously wore to Princess Leonore’s Christening in June 2014, and earrings she previously wore to the Childhood gala dinner in September 2014 for a meeting with South Korean Prime Minister Lee Wan-Koo at his official residence in Seoul. 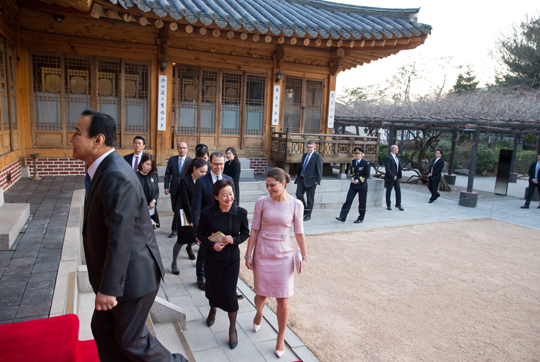 [Arriving at the PM’s residence]

On the final day of the Crown Princess couple’s trip, Wednesday March 25, Victoria and Daniel visited Seoul’s University for Foreign Studies where they donated Swedish books, and opened an exhibition in the memory of Swedish children’s author Astrid Lindgren at the Seoul library.

Then Victoria and Daniel visited a Disability Centre. At the Disability Center, Victoria and Daniel toured the facility, met with people living with disabilities, and saw technology used in their care. Daniel got to test drive a car made for those with disabilities. When speaking to the parents and children at the center, Victoria said she missed Princess Estelle: “I have a daughter who is three. I miss her very much.”

Victoria and Daniel also visited a war museum and attended a dinner in the evening. 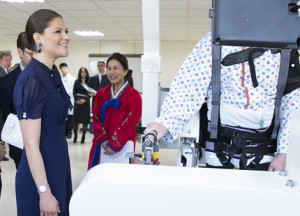 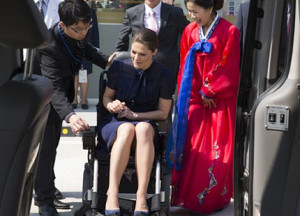 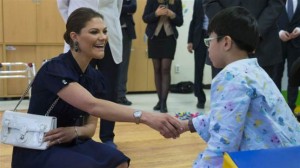 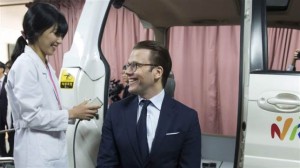 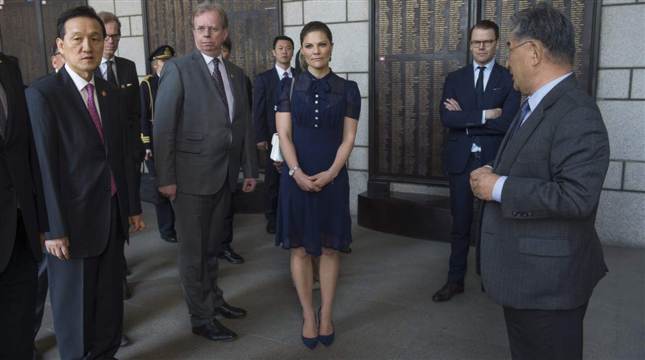 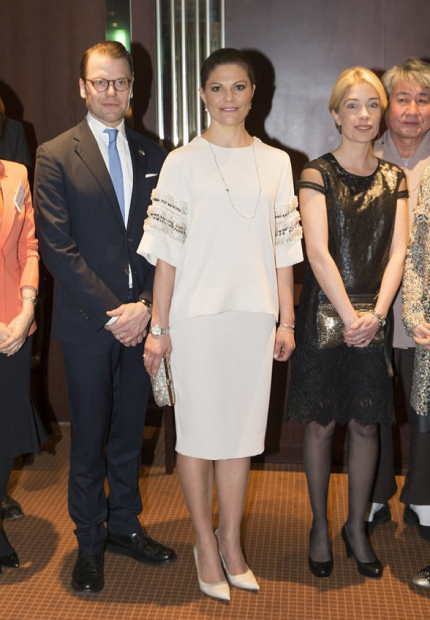 Of her visit to South Korea, Victoria said: “Sweden has tremendously good relations with South Korea and our visit rate has been high and it just shows what a very interesting country it is. During this journey, Daniel and I have been able to support each other and there have been many impressions and memories.”

I must say, I actually learned quite a bit from Victoria and Daniel’s tour. Excuse my ignorance, but I had no idea South Korea had a female president, and that’s awesome to learn. I also didn’t know Sweden had such a connection to the NNSC and the cease-fire agreement between the Koreas. Yay knowledge! PS. I love that Victoria and Daniel’s gender equal parenting style is getting praise.