Royal Round Up: William, Letizia, Mathilde, Victoria, Mette-Marit, and Camilla

In case you missed the bajillion updates I made to the last Kate post, here are all of Kate Middleton‘s scheduled appearances KP announced this week:

I am not really going to cover Prince William‘s tour of Japan and China to the full extent, or any extent really, unless you guys want me to. But I am going to pass along the above super dorky picture of William in full Samurai gear. He looks so dorky and awkward. He’s being a good sport and not offending his hosts by refusing to put on the gear, but he looks ridiculous. He clearly can’t pull off traditional dress the way Prince Charles can. Charles is a boss in the Saudi uniform (below).

Queen Letizia had a relatively light workload this past week (only two engagements). On Wednesday, February 25, Letizia attended the council meeting of the Royal Board on Disability as Honorary President of the organization – whose primary mission is to promote the prevention of impairments, rehabilitation and social integration of people with disabilities. Letizia rocked Hugo Boss again, this time repeating a BOSS red leather sheath dress she debuted last year. She wore a single button black Hugo Boss blazer over the dress in keeping with her “BusinessQueen” style. Leti accessorized with her LODI “Debra” bordeaux patent pumps she’s been loving lately, and ruby earrings.

On Thursday, February 26, Letizia joined King Felipe for the inauguration of the 34th edition of the International Contemporary Art Fair (ARCO) in Madrid. They have attended this event for years, but this year was their first as King and Queen. Letizia debuted a new outfit, going with a Felipe Varela black, white, and teal color-blocked dress with a trim of Swarovski crystals. She accessorized with her Felipe Varela black chevron bag, and new pointed-toe teal suede pumps. The color-blocking reminds me of her Carolina Herrera colorblocked dress from last week, which I kind of prefer, but I do like the teal on this new dress. 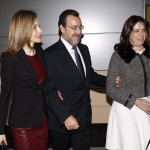 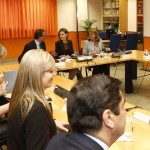 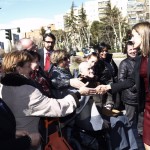 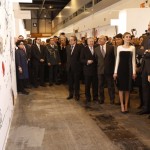 Let’s talk Queen Mathilde for a moment: 1) She “Who Wore it Better”-ed Queen Maxima from last week with her own orange and grey outfit; and 2) She’s a trooper. On Monday, February 23, a completely healthy, unbroken Mathilde wore a beautiful blue dress for a meeting with the Director of the United Nations World Food Programme. Then on Wednesday, February 25, Mathilde hobbled her way to two engagements: wearing orange and grey to a meeting at the EU Parliament; then changing into an animal print for a reception at the City Hall in Haacht. So sometime between Monday and Wednesday, Mathilde hurt her knee, and instead of canceling her appearances, she trooped her way through them. Way to go, Mathilde!

Camilla, Duchess of Cornwall was in Wilshire Tuesday, February 24, first visiting Dents Fine Accessories (a British heritage glove maker which started in 1777) where, among other things, she presented a dog with a cake. She seemed thrilled – her love of animals is well documented. Camilla then visited Community First’s new offices as Patron of the organization and attended a reception to mark the charity’s 50th anniversary, where she cut a cake. Seems there was a cake theme that day. Camilla wore a pretty purple tartan jacket and skirt.

On Wednesday, February 25, Camilla joined Prince Charles visiting the offices of the Evening Standard newspaper. She then visited “First News”, a children’s newspaper, and officially opened their offices. Later that evening, Camilla held a recital for the National Youth Orchestra of Great Britain at Clarence House, as Patron of the organization. She wore a black skirt suit she’s worn previously. For anyone out there who thinks it’s only Kate that gets crap for wearing black to visit kids, it’s not. I say UGH for black for children’s visits by any royal.

On Thursday, February 26, Camilla visited Beaumont Sainsbury Animal Hospital as Patron of the Animal Care Trust. She wore a pretty blue skirt suit. That evening, Camilla attended a reception at Draper’s Hall to mark the last Annual Officers’ Dinner of the 9th/12th Royal Lancers, where she gave a lengthy speech (full transcript here). She talked about her father, whom she still refers to as “Papa” (aw), and how he was a 12th Lancer and his experiences.

She told a story of her father’s time in France, saying: “When billeted in a French farmhouse before the evacuation of Dunkirk; the pregnant French wife of the owner (who was away fighting) went into labour; with no one else on hand, my father’s helpful contribution was an encouraging cry of ‘Poussez Madame’! … thankfully history doesn’t relate what happened next!”

PS. The round up is a day early because tomorrow I’m trying the Hottie of the Month that was asked for a while back. Any royal guy in particular you’d like to start with?

57 thoughts on “Royal Round Up: William, Letizia, Mathilde, Victoria, Mette-Marit, and Camilla”