Royal Round Up time! This week we have Sophie Countess of Wessex, Queen Letizia, Camilla Duchess of Cornwall, and Queen Maxima all getting it done royal-duty style. We also have Prince Harry, Princess Eugenie, and Princess Beatrice (on her fourth holiday in seven weeks) holiday-ing it up in Verbier. Cameos by the Queen, Prince Edward, and King Felipe.

On February 10, the Queen hosted a reception at Buckingham Palace for the Earl and Countess of Wessex‘s charities to celebrate the Earl and Countess’ 50th birthdays. 375 representatives of the charities and organizations supported by the Earl and Countess gathered in the Ballroom – Prince Andrew, Duke of York joined them as well. Both Edward and Sophie gave speeches. Sophie looked great in a new black Victoria Beckham dress, the Cap Sleeve Embroidery Fitted ($2,695) from the Pre-SS15 Ready-to-Wear collection. So expensive!

On February 11, Sophie visited Bracknell Urgent Care Center in Bracknell, Berkshire. Sophie toured the facility, took part in a plastering class with children, and unveiled a plaque. Sophie then officially opened the Boyn Grove Library. Sophie met with staff and volunteers before unveiling a plaque and cutting a cake. She then visited the Boyn Grove Community Resource Center, which is next door to the library. Sophie decided to join Kate in wearing black to visit kids and wore a black jacket from Miu Miu and a black dress from Joseph. She carried her Sophie Habsburg Design burgundy clutch and wore her black Bruce Oldfield pumps. She wore a new pair of black onyx earrings. Sophie looks very Kate-ish in this outfit, right? I could totally see Kate wearing this. It looks like a black version of that burgundy Paule Ka outfit Kate wore back in 2012.

HRH the Countess of Wessex unveiled the plaque to mark the official opening of the library this afternoon. pic.twitter.com/E4zcIIrmsc

On February 10, Queen Letizia and King Felipe visited the National Hospital for Paraplegics to commemorate their 40th anniversary. Leti and Felipe toured the Radiology, Multipurpose and Physiotherapy areas before viewing the photo exhibit “The National Hospital for Paraplegics: 40 years in pictures”, then they took part in activities with the patients. Felipe gave a speech before unveiling a plaque. For the visit, Leti chose Hugo Boss again, going with the grey “Jetala” blazer and “Taru” trouser. Underneath, she wore her Carolina Herrera fuchsia silk blouse. She wore black ankle boots, and a new pair of Alexandra Platas “Blooming Light” earrings in fuchsia agate.

On February 12, Letizia and Felipe visited Freixenet (a Cava – a sparkling red wine – producer in Barcelona) to mark it’s 100th anniversary. Leti and Felipe toured the facility, including the cellars and the production area; they viewed a mural painted by one of the workers; and held a lunch for over 150 guests. Leti wore a red Felipe Varela wool dress she previously wore in November 2014 for the Second International Conference on Nutrition. Leti accessorized with the Magrit blush-colored patent clutch, TOUS “Beethoven” multi-colored earrings, and red leather pumps. 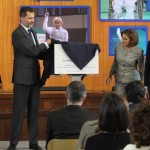 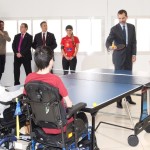 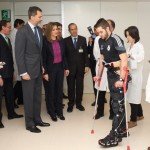 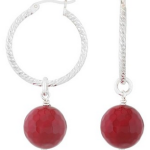 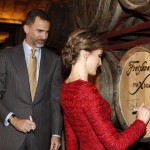 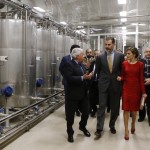 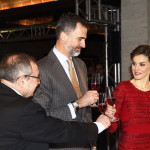 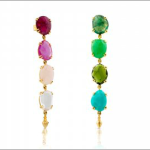 On February 11, Camilla, Duchess of Cornwall visited Bulford Camp in her role as Royal Colonel, 4th Battalion, The Rifles where she viewed the training facilities and met soldiers and family members. The Battalion moves to Aldershot in July. Camilla went with a military-inspired look in a black, double-breasted coat, and her favorite black flat boots. She brightened up the look with a black and red striped scarf. I’m not really feeling this coat.

On February 12, Camilla visited Holland Park School in her role as Patron of First Story. Camilla met with pupils and took part in a creative writing workshop before presenting the prize to the winner of First Story’s National Writing Competition. While presenting the prize winner, Camilla said, “I hope that looking at all of you here today there may be sitting amongst you some of the great writers of the future.” No photos of this visit, sadly.

Also on February 12, Camilla received Ian Wheatley, the new Chaplain of the Fleet, in her role as Commodore-in-Chief, Naval Chaplaincy Service. This showed up in the Court Circular but there are no photos.

On February 13, Camilla visited Sandown Park to attend a meeting for the Royal Artillery Gold Cup, and present the cup to the winner of the race (Mike Shaw and jockey Jody Sole). The event celebrates the British Armed Forces with a day of horse racing. Cam went with a repeated brown tweed coat with blue, red, and gold pinstripes. She accessorized with a cute leopard scarf, furry hat, brown bag and brown flat boots. I like this outfit. 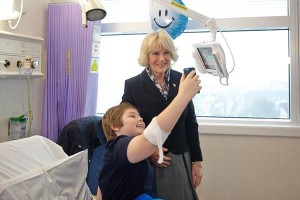 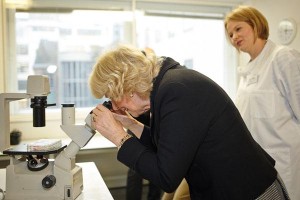 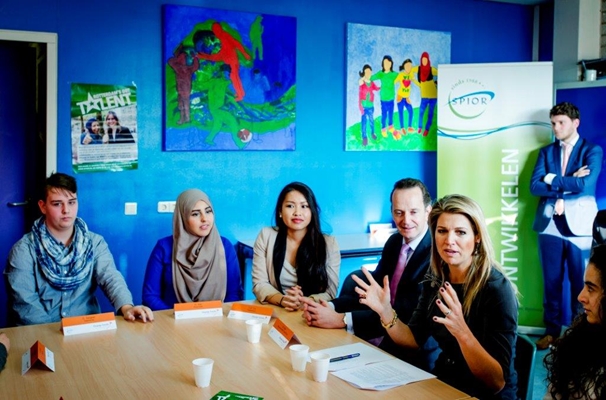 Queen Maxima was in Rotterdam Friday, February 13, where she visited Rotterdam’s got talent! and U-Turn, two initiatives participating in the Orange Fund Opportunities for Youth program (of which Maxima is patron). At both initiatives, Max spoke with organizers on the current results and future plans for the organizations, as well as talking to young people and volunteers about their experiences.

PS. That baby’s face in the photo below, hilarious! 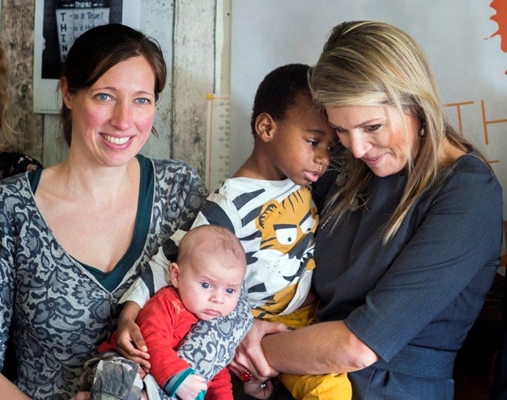 Prince Harry has jetted off to Verbier for a skiing vacation with his cousins, Princess Beatrice and Princess Eugenie. Not sure if Eugenie’s boyfriend, Jack, and the Male Waity, Dave Clark, are there or not – but they probably are (Dave seemingly has an endless supply of vacation days from Virgin Galactic to follow Beatrice around). This is Beatrice’s fourth holiday in seven weeks. She was in Verbier in late December, in St. Barts for New Years, back in St. Barts in late January, and now back in Verbier. She is currently jobless having quit her Sony job in December. When you vacation more than Kate Middleton, you have a problem.

Not-so-busy Princess Beatrice is on holiday again http://t.co/YvLR3j8T72 via @MailOnline