It’s a brand new year and two royal families celebrated with tiara events. This post is for the Japanese Imperial Family (go here for the Danish Royal Family post). Emperor Akihito and Empress Michiko of Japan, accompanied by members of their family, hosted the annual New Year Greeting Ceremony at the Imperial Palace in Tokyo yesterday, January 1. 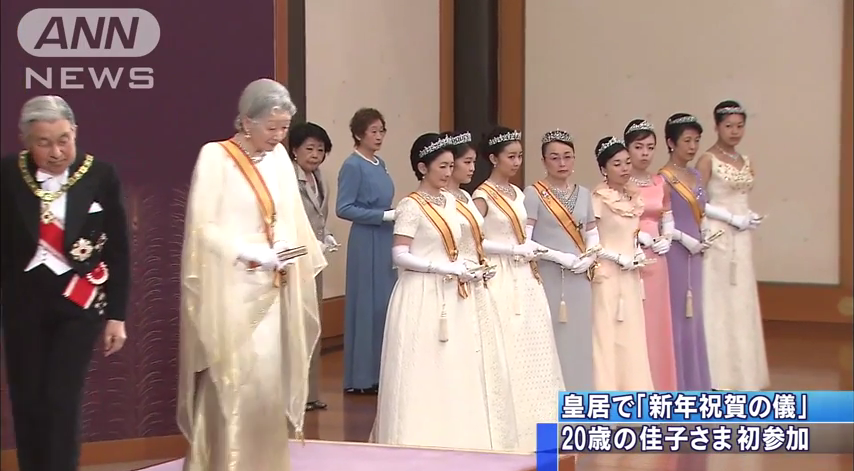 Before I get to the tiaras, here is the Emperor’s 2015 New Year message:

Last year many lives were lost to natural disasters such as heavy snow, torrential rains, and the volcanic eruption of Mt. Ontake, and my thoughts go out to those who lost their loved ones and their homes in those disasters.

This is the fourth winter since the Great East Japan Earthquake, and it pains me to think that there are still so many people who cannot return to the places they used to live because of radioactive contamination and so many who face the prospect of a cold, harsh winter in temporary housing. These conditions have made me reflect on the importance of people becoming concerned about and involved in disaster prevention in their respective regions and being prepared to protect their own localities.

This year marks the 70th anniversary of the end of World War II, which cost many people their lives. Those who died on the battlefields, those who died in the atomic bombings in Hiroshima and Nagasaki, those who died in the air raids on Tokyo and other cities-so many people lost their lives in this war. I think it is most important for us to take this opportunity to study and learn from the history of this war, starting with the Manchurian Incident of 1931, as we consider the future direction of our country.

It is my sincere hope that the new year will bring happiness to the people of our country and the people around the world. 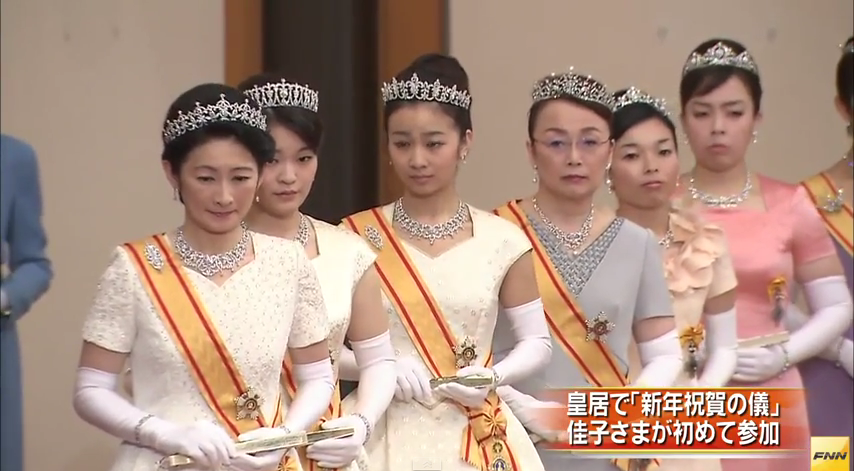 Empress Michiko did not wear a tiara, but there were lots of other tiara-wearing ladies in attendance. The three women in white in the above photo are (from L-R) Princess Kiko (wife of Prince Akishino, the second son of the Emperor), and her daughters Princess Mako and Princess Kako. They are all wearing their own tiaras and matching necklaces and brooches.

Princess Kako just celebrated her 20th birthday on December 29. She celebrated with an event at the Imperial Palace where she prayed at the Three Palace Sanctuaries on the palace grounds and then her grandfather, the Emperor, bestowed her with a decoration known as the Grand Cordon of the Order of the Precious Crown.

The tiara was a gift for her birthday and is part of a parure, including a necklace and bracelet. The entire suite of jewels cost about $233,000.

Here are two videos of the New Year Greeting Ceremony: