Thank you for all the Christmas wishes everyone. I hope everyone had an awesome Christmas, or an awesome December 25th if you don’t celebrate Christmas!  To the royal-y things… Prince William and Kate Middleton are so in lurve, you guys! The Duke and Duchess of Cambridge held hands for the second year running while walking to the Saint Mary Magdalene Church on the grounds of Sandringham Christmas morning.

Others who joined the Queen and the Cambridges for church include Prince Philip, Prince Charles, Prince Harry, Prince Andrew and Princess Beatrice and Princess Eugenie, Prince Edward and Sophie and Lady Louise, and Princess Anne and her husband and son and his wife. Camilla did not attend. According to Clarence House, Camilla put her back out earlier in December. That’s why she didn’t attend the Buckingham lunch last week. 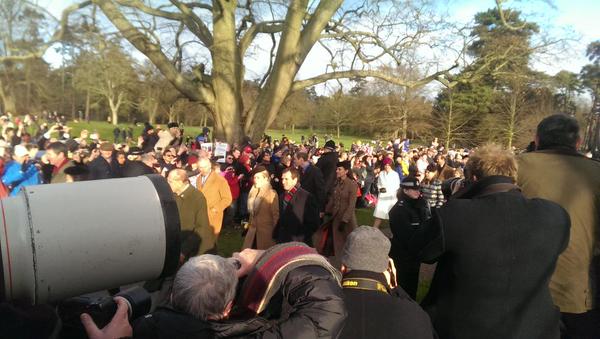 It baffles me that there is still a “will they/won’t they” regarding whether Will and Kate will bring Prince George to church on Christmas. The royals never bring their children to church until they are much older. Hell, the Wessexes didn’t even bring James, Viscount Severn, and he’s seven. George is 17 months. Will and Kate were never going to bring him. But of course, that didn’t stop them from talking/complaining about him. Kate said, “I’m sorry we didn’t bring George but you would have heard him in the church.” While William said he was looking forward to going home to see what destruction George had created. Sigh. We get it, Will and Kate, George is loud and destructive. Enough already.

According to the Mail, William and Kate did not join the Queen for lunch after the service, instead heading back to Anmer Hall and having lunch with Kate’s family, because “The Duchess has long been keen to host a big family Christmas in her new home, the kind of Christmas she enjoyed as a girl.”  But apparently it’s cool with the Queen because “The Queen understands that they have other family commitments.”  Will and Kate really are breaking all sorts of royal Christmas traditions, aren’t they.  First the spent 2012 Christmas with the Middletons, and now they spend this Christmas mostly with the Middletons, and the Middletons even got to go to church service.  Seriously, William Middleton.  At this rate poor Prince George will end up George Middleton as well. 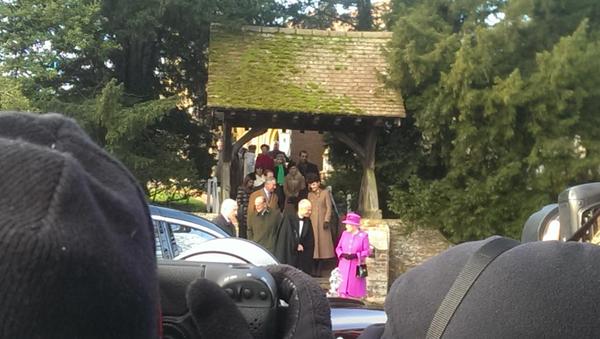 You know how we all think Kate hates her changing pregnancy body and that’s why she’s been in mourning lately… well Kate mentioned her body to a woman in the crowd. Mary Young said, “I told [Kate] she looked beautiful and she said thank you and she feels big.” She feels big? Seriously? She barely looks pregnant. Either Kate has some serious hate for her changing body or she’s one of those a-holes who say they look fat when they don’t so that you’ll give them a compliment about how good they look. I wouldn’t put it past Kate to be one of those a-holes phishing for compliments (and for some reason they always do it to people who weigh more than them, because they’re a-holes), so that may be what this is. Or it’s just Kate trying to “relate” to normal people, or something. But I do think she genuinely doesn’t like gaining the pregnancy weight.

Honestly, though, if I didn’t know Kate was almost six months pregnant, I wouldn’t know. She looks like she’s a normal, healthy weight; not pregnant at all. When is she going to start showing more than a tiny tummy when she presses her hands to her crotch?  …BTWs, I’m pretty sure I could make that same tummy pop if I pushed my hands to my crotch, and I’m not pregnant.

Kate continued her fall trend of wearing new clothes at every event except the St. Andrew’s gala with a new brown coat from Moloh paired with her brown Betty Boop hat from Lock and Company that she’s worn at least four times now, her Catherine Zoraida Double Leaf earrings, brown Valerie pumps from Emmy Shoes, and Cornelia James gloves.  UPDATE: This outfit is so boring and blah that I forgot to comment on it; let me do that…. I think this outfit is boring and blah. /UPDATE

Here’s a photo of Kate talking to Charles as they leave the church. What do they talk about!?

Kate’s family is staying at Anmer Hall with Will and Kate, and they joined the royal family for Christmas service. Yep, the Middletons finally got to spend Christmas with the Queen. Kind of. They weren’t invited to actually spend time with the Queen at the big house, but they got to sit in the same church as her for half an hour. Below are picture of Carole Middleton and Michael Middleton (who is obscured by Carole’s head), Pippa Middleton and James Middleton. Huh, you’d think they’d be grinning from ear to ear.

Shout out to Princess Eugenie who won Best Dressed in her pretty white coat and fuchsia hat.

Below are two videos of the royals walking to and leaving the church.


Below is the Queen’s Christmas message.

Below is a video of Kate’s visit to the Scout meeting. I’m posting it because I just saw it and it contains something I am fascinated by. For some reason, I’m obsessed with knowing whether Kate eats or not – because, you know, we think she has some sort of eating disorder – and when she visited the Scouts, she did an activity where she cut a chocolate bar with a fork while wearing a boxing glove and told to eat the piece of chocolate. I wondered at the time if she actually ate it or not, and this is a video of the event showing Kate putting the chocolate in her mouth and chewing it! The video cut off so I don’t know if she swallowed, but she chewed it. I’m shocked, shocked I tell you!