Happy 50th Birthday to Prince Edward, Earl of Wessex! The Prince was born on 10 March 1964. He is the fourth child of Queen Elizabeth II and Prince Philip, Duke of Edinburgh. 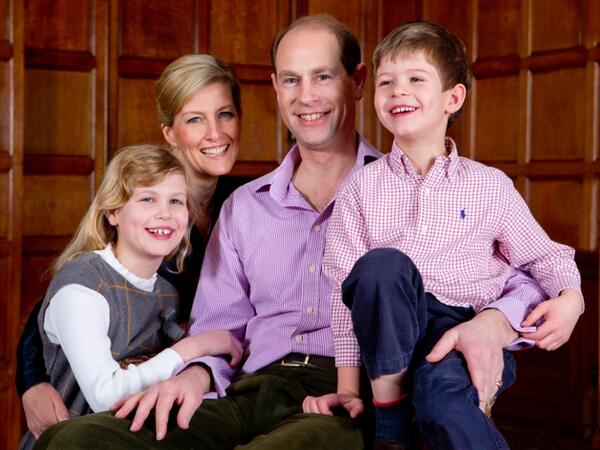 This is a photo released by Buckingham Palace to mark Edward’s 50th birthday.  It was taken at their home, Bagshot Park.  Look at the size of their house.  Wow.

They held a party Saturday night at their home to celebrate.  The Queen and Philip attended.  Edward will be celebrating today by performing three public engagements.  He will conduct two engagements with Sophie in support of the Wessex Youth Trust, and will accompany the Queen and other royals to the Commonwealth Observance Service at Westminster Abbey.  Then he will spend the evening quietly with his family.  What a lovely way for a royal to spend their birthday.

Edward’s life has been up for discussion in numerous articles leading up to his 50th birthday.  I’ve learned a lot about him.  I hate to sound like a Wessex apologist, but Edward’s failings make me like him even more.  I like that he tried to march to the beat of his own drum, and push against Philip’s demanding rules for the family.

There are some sketchy things I side-eye, though.  Like getting into Cambridge even with his poor A-levels.  I’m guessing Edward only got in because it would have been a PR nightmare if they refused him.  Another thing I’m side-eying is the fact that he urged everyone to give blood, but doesn’t give blood himself, and refused to say why he doesn’t.  My first thought when reading that bit was… not good, and that makes me sad.

Anyway, happy 50th birthday to the Earl of Wessex.