British Royals Sophie Countess of Wessex
March 10, 2014May 13, 2014 by katemiddletonreview3 Comments on Prince Edward and Sophie visit primary school on his 50th birthday

To celebrate his 50th birthday Prince Edward and Sophie, Countess of Wessex visited Robert Browning primary school in Walworth, London to observe work being carried out by Kidspace, a charity preventing childhood bullying, who received money from the Wessex Youth Trust. The Wessex Youth Trust is a charity set up in 1999, after the Wessex wedding, that has granted £1.3 million to 154 charities since it’s inception. 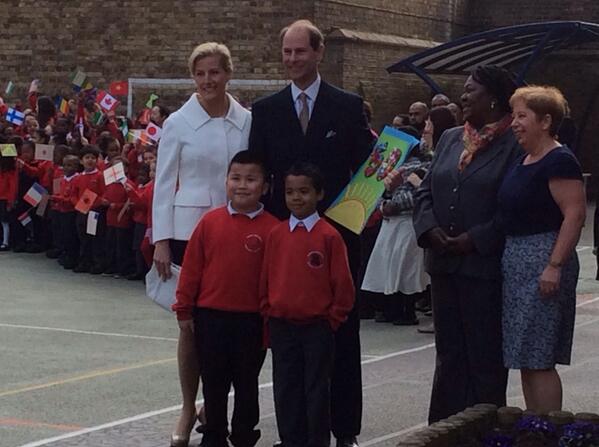 There were two children at the school whose birthdays are also March 10, so they made Edward a birthday card and everyone signed it and the birthday boys got their picture taken with Edward and Sophie.  They also had a cake there for Edward’s birthday. The choir also sang him “happy birthday”.  Edward and Sophie met with the children and discussed being bullied and coping strategies, and sat in on classes. Visit the Express article for quotes from Edward, children, and other members of the charities. From the quotes, Edward seems quite nice and a bit self-deprecating.

Let’s talk fashion.  Edward looks like an old school gangster in his pinstripes.  I love it.  Sophie looked good.  I wish there was a What Sophie Wore floating around, I’d love to know everything she wears.  Sophie wore a white jacket, black pencil skirt, and nude pumps.  She carried a white purse and her hair was pulled back into a low ponytail.  The pencil skirt is great, just what someone should wear when bending down to talk to children, no worry about showing anything.  I love that even in her high heels and skirt, Sophie still manages to crouch all the way down to talk to the children.  This is not my favorite outfit from Sophie, but it is appropriate for the event and she looks nice. 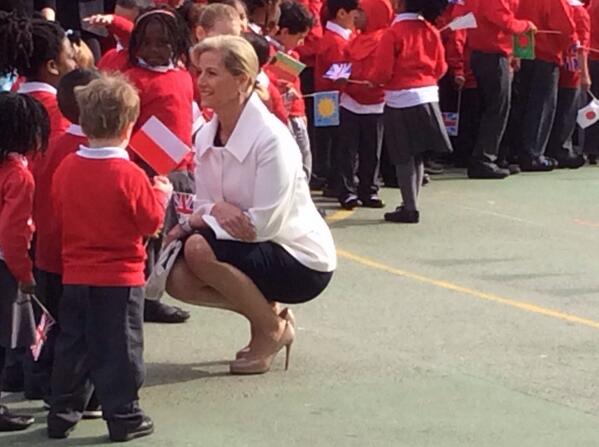 There were a number of people, and reporters, there for the visit (not including the schoolchildren).  That’s nice to see.  The Wessexes usually don’t get a ton of coverage, even though Edward did over 300 engagements last year, Sophie did over 200.

Edward also granted an interview to the BBC News School Report.  I love that he says that his greatest memory from his 50 years is his wedding day.

Not sure whether this is going to work, but here is a short clip of the Countess of Wessex today from Rebecca English on Vimeo.

The Countess of Wessex today from Rebecca English on Vimeo.