Pippa talks about her bum in a speech, hires a new PR firm

Pippa Middleton
February 26, 2014January 2, 2017 by katemiddletonreview7 Comments on Pippa talks about her bum in a speech, hires a new PR firm

Pippa Middleton made an appearance at the Women in Advertising and Communications dinner Monday night.  Pips was the keynote speaker, I guess.  She talked about how nervous she was before Will and Kate’s wedding in 2011, and how her dress “fitted a little too well”—she forgot to mention she was probably wearing butt pads, though.  She also talked about the downsides of fame and how the accusations of her famewhoring and cashing in on her royal connection by writing a book and everything else really hurt, and that the negative response to her book has been “difficult”. 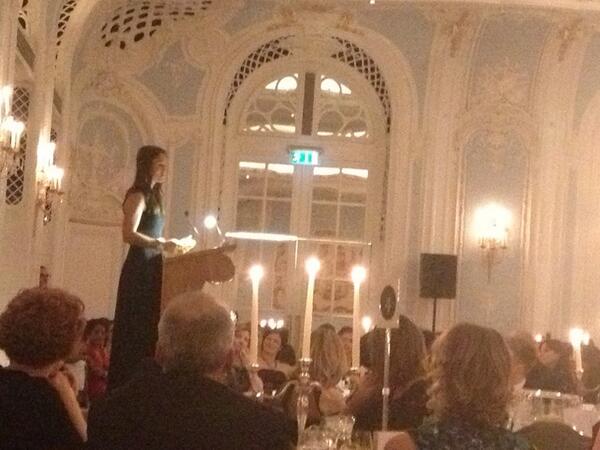 The amount of negative press she got for her book would hurt anyone, and I don’t blame her for having a difficult time dealing with it.  The problem is, and where my sympathies end, is that she clearly put so little effort into the book that she should have known she was going to get lambasted for it.  If she had actually spent enough time writing a great book, it would have shut the critics up.  Yes, they still would have said she was cashing in, but they wouldn’t have been able to say her book was terrible if she had actually written it well.

Pips wore a £1,000 black Catherine Deane ‘Simone’ lace panel jersey evening gown.  It’s cute enough, and is appropriate for the event.  Carole accompanied Pips to the dinner.  On one hand, I understand why Pips would want her mother there for moral support, because it was her first public speech.  But on the other hand I just have to roll my eyes that Carole was there, too.  Of course she was, you know.

You know who else was at the dinner with Pips?  Her new PR man, Simon Kelner.  Pippa was dropped by her American publisher, Viking Press, after her book only sold 18,000 copies.  And now she’s hired a new PR firm.  There are two reasons one hires a PR firm, to keep their name in the press, or to keep their name out of the press.  Guess which one Pips is probably looking for?  What Pips really needs is to find a steady job and stop flitting around trying to make a writing career happen.

One guest at the dinner said of Pippa:  “It was the first time she’s made a speech of this kind but you wouldn’t have known it, she was so relaxed. It was unbelievable how open she was – I don’t think anyone was expecting that.  She talked about the royal wedding and her career since. She came across as really grateful for the opportunities but also talked about the pitfalls of her position.”

You know, I would believe that.  I think Pippa is much more confident than Kate and Pippa would probably be a good public speaker.  From the little bit I saw of her speaking to a reporter when she was promoting her book, she seemed natural when speaking.  She used a lot of “ums” and whatnot, but she didn’t come off as stilted or anything.  Kate could definitely take a lesson from Pippa in that area.

7 thoughts on “Pippa talks about her bum in a speech, hires a new PR firm”