I guess now we know why we didn’t get a photo of Mia Tindall a month ago when they said they were going to release one…. Zara chose to sell her baby’s first photo to Hello mag instead. She reportedly sold them for £150,000, or about a quarter of a million dollars. 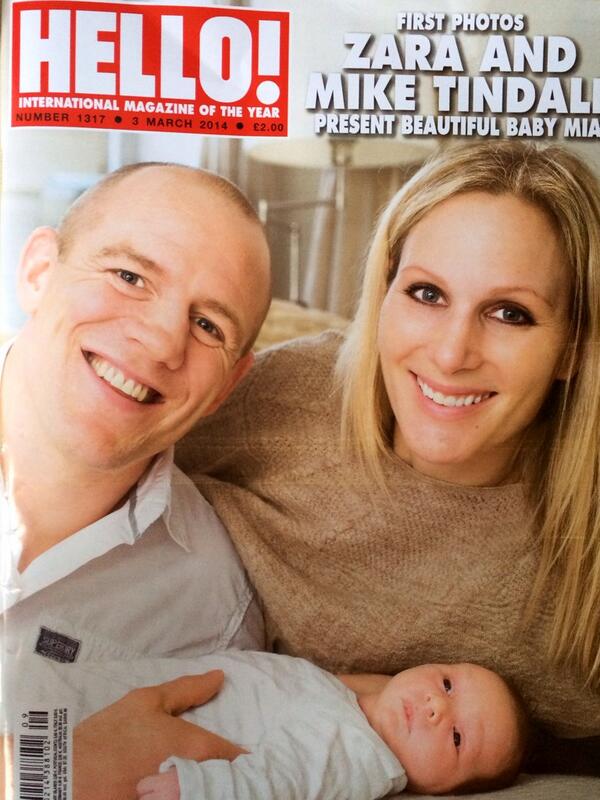 Zara’s publicist denied they would use Mia’s birth to make money, and then they sold the first photos to Hello. Apparently the Palace was not aware of the deal prior to it and the Palace spokesperson refused to comment on it. That’s interesting. Zara’s brother Peter sold his wedding photos to Hello, including a photo featuring the Queen, for £500,000. Apparently the Queen was deeply unhappy with that decision and other Senior Royals said they felt “betrayed” by it. So I’m guessing the Queen won’t like Zara’s decision. A source close to Zara insisted “she and Mike had agreed to the deal as ‘international sporting figures’ rather than members of the Royal Family.” Here’s the thing, Zara IS a member of the Royal Family (whether the Palace’s press officers want to acknowledge that or not). She may not be an HRH, but she is the Queen’s granddaughter and 15th in line to the throne. If she wasn’t, Hello mag wouldn’t have bought the photos in the first place. Yes, Zara is an Olympian, and Mike is a rugby player, but I highly doubt they would have landed a cover and a paycheck if they were not members of the RF. Surely they would not have gotten the same coverage, the public wouldn’t care as much.

I’m not sure how I feel about this. On one hand, I understand it, because a lot of celebs sell their baby’s first photos to a mag, but on the other hand it kind of diminishes my view of Zara and Mike that they went that route. I would have thought, since they’re so “low key”, that they would have posted a photo on social media. Or done an official press release to release the photo that way. It kind of makes me think they really wanted the attention having a mag cover gets them, you know. And the money doesn’t hurt. And I’m pretty sure they’re keeping the money. A source close to Zara said: “I think Zara understands there will be a level of criticism directed at her but she clearly felt this was the best way to approach the level of interest in Mia and, of course, provide for her future. [emphasis KMR]” Yeah, they’re totally keeping the money. I’m sure there will be people who think Zara and Mike should donate the money they got to charity, but I can’t really begrudge them if they keep it. If they put it in a trust or some type of savings account for Mia’s college or something, then I’m cool with that. By the way, and I’m not trying to be rude here, how much of an interest in Mia was there outside of the royal watching circle? Was there some huge interest that warranted selling the photos to a mag? I don’t know, like I said, I don’t think they would have gotten the cover/paycheck if she wasn’t a royal.

What this action does, though, is prove that Zara wants attention, and that she isn’t as “low key” as she wanted us to think. She may have had an NHS birth and may not have a full time nanny, but she likes having her picture taken. The Mail has a list of all the times Zara and the Phillips’ have appeared in Hello. It’s quite a few. I don’t think it’s as “tawdry” as some royal reporters were saying, but it definitely makes me rethink my view of Zara and Mike.

Some tidbits that came out with the picture: *Zara used an epidural. I’m glad she came out and said that. There are so many celeb women who claim they didn’t use one, and then throw it in the faces of women that do, and that’s total BS. Good for Zara for not being ashamed of admitting it. If a women wants an epidural, she can damn well have an epidural and there is no shame in it, and it doesn’t somehow make her “less than” for having it. *They hired a maternity nurse for the first few days before they got the hang of parenting. Again, good for them for admitting it. There is no shame in wanting a nurse to help (if you can afford it and clearly they can, what with the £150,000 😉 ), just don’t lie about it–side eye to Kate Middleton.

Do we want to actually talk about the photo? I would have liked to see her hold the baby. I’m sure there are better pictures in the 13 page spread, but whoever chose the cover photo didn’t chose wisely, in my opinion.