Kate and William attend the Tusk Awards, and have a new nanny 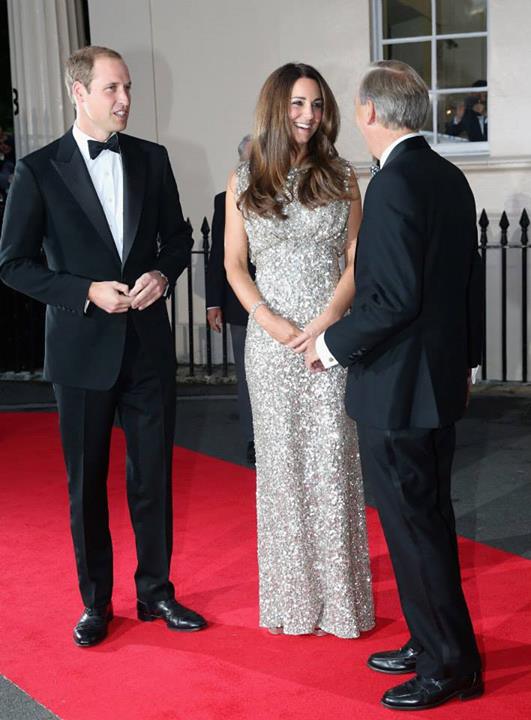 William wore a black tux and Kate wore a silver (or what the designer is calling a pale gold) sequined dress.  The dress looks ridiculous to me, it looks more like something a sure-thing Oscar contender would wear than someone attending a conservation awards (that and I really don’t like the fit, I think it may supposed to be like that but I still don’t like it).  I don’t know, I think the dress is ugly, and tacky.  I’ve seen sequins done well, and this just isn’t it.  Let’s talk about Kate’s body and hair (since her post-baby body and weave-tastic hair are the only things she has to talk about): her hair needs to be pulled up, especially for a formal occasion and when she’s wearing a high-necked dress, the hair just gets in the way; as far as her body… she looks the same as she did a year ago before she was ever “pregnant”, and now that’s all anyone is going to talk about, mainly because that’s all there is to talk about.  I almost feel bad for Kate, she can’t talk about what she’s doing or what she’s interested in, all there is to talk about is her hair, her clothes and her weight.  That’s sad.  Oh, PS, the dress is by Jenny Packham.  I do want to mention her jewelry (I love jewelry), Kate’s isn’t that great.  She wore some diamond bracelet she’s worn before, and some small earring which was barely visible underneath her massive hair.  She really doesn’t seem to have an extensive nor expensive jewelry collection.  It’s a bummer for me since I don’t get to look at nice jewelry; it’s also a bummer for her since she doesn’t get to wear nice jewelry, but then again she doesn’t deserve it now does she. The Daily Mail has more photos from the event, as does the Tusk’s Facebook page–where I got the above photo.

Poor Prince George is already getting thrown under the bus by William.  William said, “As you might have gathered, Catherine and I have recently become proud parents – of a baby who has a voice to match any lion’s roar!”  This is not the first time William has mentioned that fact that George seems to be quite a little screamer.  He’s mentioned it at every event he’s been at since the birth, including the presentation of George to the press outside the hospital.  We get it William, George is loud and you can’t seem to handle that, but guess what you’re a parent now and it’s your job to handle that now suck it up and get on with it.  And quit whining to the press about it.

I want to mention this photo specifically: http://i.dailymail.co.uk/i/pix/2013/09/12/article-2418979-1BC8E221000005DC-256_634x799.jpg.  It creeps me out, not because of the stalker stare Kate is giving William, but because before I saw the dress I recognized that look from a previous photo of them and legitimately thought it was that one before I scrolled down and saw the sequins.  I can’t seem to find the photo I’m looking for, grr.  Anyway, there is a photo from a previous event that is almost identical to this one.

I thought this post would be a nice one to include the new nanny stuff, since George was with her while his parents attended the awards.  Kate and William have officially hired Jessie Webb, 71, William’s former nanny, to be the nanny to George.  It was speculated about a month ago, and now she has been seen with Kate and George in a McDonald’s parking lot–they stopped but apparently only for a pee brake as Kate did not stop long nor brought out any bags of food.  Yeah, knew this was coming.  Honestly, even though the reporters seem to want to deny it, I think they have had a nanny the entire time, and if not a formal nanny there was at least someone to take care of the baby because you know it wasn’t Kate doing all the work.  Finally we can stop the charade of “we don’t have a nanny because we’re so normal”.  I’m just plain sick of it.

PS, the irony of this front page is hilarious. They have a nice big front page spread about MPs spending too much tax-payer money and then throw a little photo of Kate in with the title “Queen of Sparkles”, as if to say “here’s another money-wasting jerk” that the people should be annoyed with. 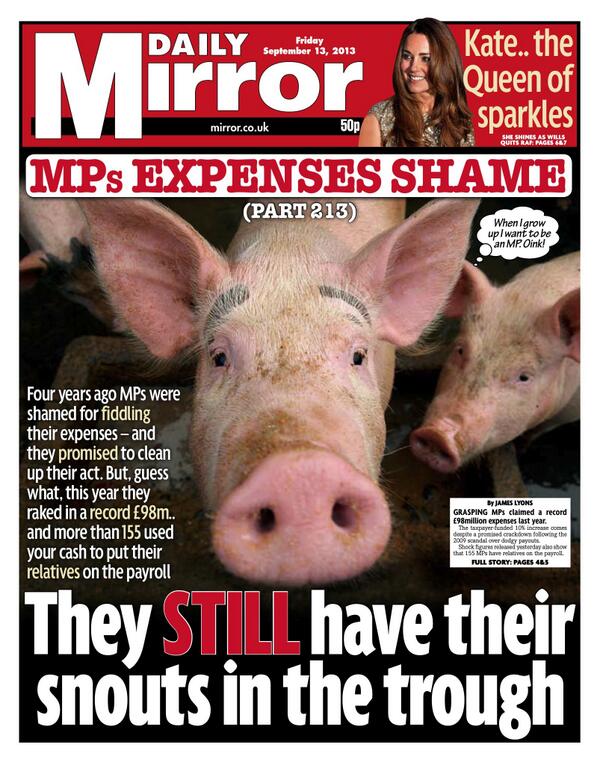 5 thoughts on “Kate and William attend the Tusk Awards, and have a new nanny”