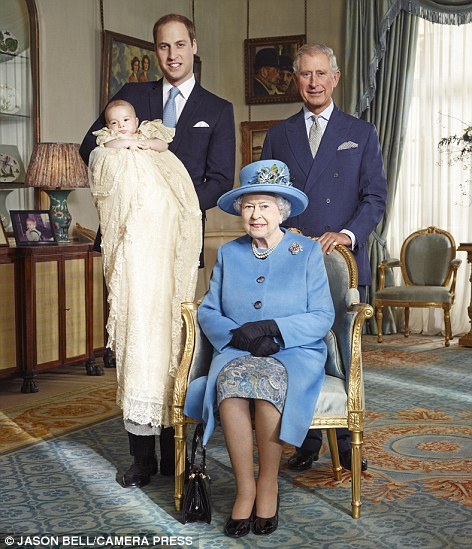 These are a bit late—since Prince George’s christening was on Wednesday, and the official photos were released on Thursday—but here’s the official photos of Prince George’s christening—the first actual professional photos we have of the little guy, since Michael Middleton’s awful photos don’t count.  I have to say, they really photoshopped Kate to hell and back in the photos, she looks like a wax mannequin, especially in the one that is just her, William and George.  My favorite photo is the one of the Queen, Charles, William and George—four generations of monarchs, well technically one monarch and three (possible) future monarchs.  That type of picture has only happened one other time, in 1894 with Queen Victoria, and future kings Edward VII, George V and Edward VIII.  I love this photo so much—which is why I’m actually posting it—the only way I would love it more is if the Queen had been holding George.  The other photos are of the entire family—the Windsors and Middletons combined.  The one of William, Kate and George, where Kate looks super waxy but the baby is happy so that makes up for it I guess.  And one that is just the royals, where the Queen is looking at George.  I love that the Queen is looking at him; I wish they had gotten a photo with the Queen holding George, that would have been so nice.  But maybe she didn’t want to hold him, I don’t know.  It would have been nice to get a photo of Charles holding George as well.  Sadly that did not happen either.

Here are some links to the Cambridge’s official website with more details about the godparents and guests, the service details, the christening details, and some official photo galleries.

Here’s a close-up of George outside the Chapel Royal before the christening.  You can see he has brown eyes, like Kate.  I totally called that by the way, the press for some reason thought he might have blue eyes like William and Diana… ha!  Like that was ever going to happen.  The press wanted a beautiful blue-eyed, blonde baby (girl) who would replace Diana, but that was never going to happen… not with Kate’s brown eyes and hair.  George has brown eyes, and has some brown hair growing in.  Seriously, at least in his coloring, he is going to look much more Middleton than Windsor/Spencer.  I like this photo, though, he looks like a grumpy old man.  I love it.  Oh, by the way, George was super well behaved, at least in the short videos I’ve seen.  Unlike William who was fussy and crying the entire time.  Well done George!

Only twenty-two (22) people attended the ceremony:  the Queen and Prince Philip; Prince Charles, Camilla and Harry; Kate’s parents, Michael and Carole, and siblings, Pippa and James; Prince George’s godparents and their spouses (not all of them are married or else it would have been 23).  No other royal family members (except Zara but she was a godparent), and no Cressida Bonas—even though the tabloids were claiming that she had gotten an invite; they really want to marry Harry and Cressida off, it seems.  [For what it’s worth there were denials that she was even invited, before the ceremony. Of course the denials come straight from Cressida/her people… but that’s another story.] I don’t mind the smaller ceremony with no extra royals.  I know that the media and other royal watchers were freaking out that Charles’ siblings were not invited, but I don’t see it as a big problem.  Would you invite your parent’s siblings to your child’s christening?  I wouldn’t invite my mother’s brothers to my child’s christening, not because I am on the outs with them, but because they play no real role in my child’s life.  If I or my spouse had siblings, then they would be invited (as Harry, Pippa and James were), but they are the child’s aunts and uncles so it makes sense.  But the child’s great-aunts and great-uncles?  Nah.

Let’s talk fashion: Kate wore a cream Alexander McQueen dress with ruffles.  It’s not super awful, I don’t mind the color, matching is fine.  I would have gone with a color though, but apparently Kate wanted to match George.  I wonder if she’s going to go the matchy-matchy mother-son route from here on out, that would get awful.  I’m not a big fan of ruffles though, and this dress has a crap load of them.  Pippa also wore cream… eh, boring. And boxy. Goodness, Pippa, please learn to dress yourself better, or get a stylist or something.  Camilla wore cream as well, and I think she looks nice.  One of her better outfits, I think.  She doesn’t always dress her body to make herself look good, you know, but she looks really nice here.  The Queen wore a light blue and looked lovely.  The Queen always looks lovely, hats off to Angela Kelly who does the Queen’s wardrobe.  Carole Middleton wore a dark blue coat and what seems like a gray (?) dress underneath.  I actually think she looks the best here that I’ve ever seen her, usually she looks awful, but in this outfit she looks nice.  Zara wore a dark, navy blue.  She’s about six months pregnant and looks really nice; some of her pregnancy outfits haven’t been that flattering so it’s nice to see Zara looking so good.