Kate in McQueen and Queen’s diamonds for NATO reception (update) 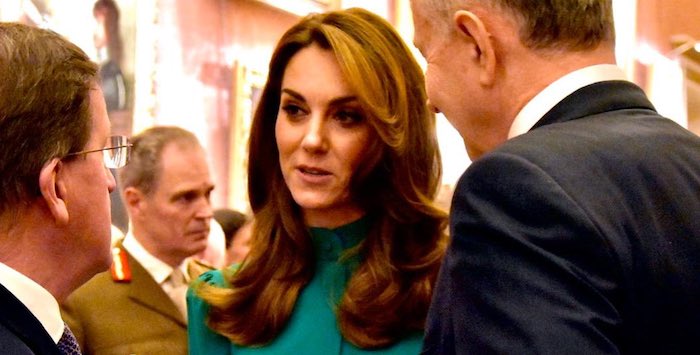 The Duchess of Cambridge joined The Queen, Prince Charles, and the Duchess of Cornwall for a reception at Buckingham Palace this evening, December 3, for the Heads of State and government of the NATO alliance. The reception is in honor of the 70th anniversary of NATO.

The Queen, Charles, and Camilla greeted the Heads of State and their spouses and partners in the Music Room of Buckingham Palace before hosting the reception in the Green Drawing Room. Charles joined the Queen for the group photo with the others Heads of State and government in the Throne Room.

Kate, Princess Anne, and the Gloucesters welcomed NATO leaders, members of the delegations, and NATO staff in the Picture Gallery.

I’m including photos of HM (wearing The Queen Mother’s Palm Leaf Brooch), Camilla, and Kate speaking with Justin Trudeau because 1) these are some of the better photos of these ladies, and 2) I think he’s good looking.

Camilla is wearing her standard (and boring) pearl earrings and choker, but I think the red dress looks nice on her.

UPDATE: According to Rebecca English, Kate was wearing an Alexander McQueen dress, not Emilia Wickstead.

From what little I’ve seen of the dress, it’s not my taste, but it is very much in Kate’s comfort zone. I do think Kate’s hair looks nice, and I always love to see the diamonds.