Kate Middleton has been busy this week. On Monday, she danced with Paddington Bear, on Tuesday she (KP) announced the due month of her third child, and on Wednesday, October 18, she tagged along with Prince William and Prince Harry to London Stadium for a Coach Core apprentice graduation.

Founded by the Royal Foundation in 2012, Coach Core is a year-long apprenticeship program which gives young people age 16-24 the chance to become sports coaches. As part of yesterday’s celebration, the graduating class received a masterclass from top coaches in gymnastics, tennis, football, and rugby. 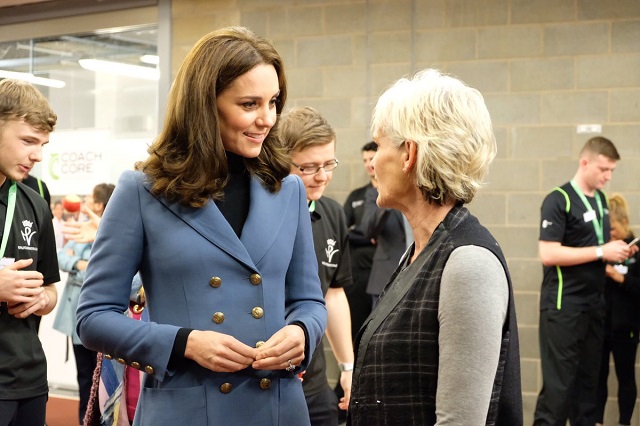 One of the top coaches present was Judy Murray, whom Kate met previously back in February 2016. Judy spoke to the press afterward, saying:

“To have the backing of the Princes and the Duchess is amazing and a huge inspiration for all the young people. We were talking about the things you can do with kids when they’re little to help them develop those core skills. They don’t need to be taught by a coach. Parents have got a big role to play in that. The Prince and the Duchess are very sporty so I’m sure they’ll be keen for their kids to enjoy sport as well.”

The royal trio spoke to the apprentices about how the program helped change their life. Coach Core offers affordable training in technical skills as well as other areas such as employability and mentoring.

Harry gave a speech as part of the graduation ceremony. He said:

“I would like to start by thanking Karren and West Ham for letting us all be here today. It’s so appropriate that we are back here – five years after it all began, during the incredible summer of the 2012 Olympic and Paralympic Games. At the time, William, Catherine and I were looking at the issues that we wanted to tackle together with our newly formed Royal Foundation. It was clear that all three of us believed firmly that sport could be such a powerful force for good. We felt confident that for many young people, at risk of falling through the cracks, as they left school, sport could be the answer to keeping them on track or change the course their lives were already headed. We knew that with the enthusiasm sweeping the country during that summer, we had a window of opportunity to bring the right people and organisations to the table to make something really exciting happen. The idea for Coach Core was born.

“Working with leading organisations in the sector and partners across a number of cities, we set out to put groups of young people through an intensive year-long course in high quality sport coaching, life skills and mentoring. Our aim has been to create the next generation of exceptional sport coaches who are giving back to the kids in their own communities – who in turn will become leaders, mentors and role models themselves.

“And so far the results have been incredible: 250 apprentices have taken part in more than 30,000 coaching sessions; meaning that this programme is responsible for over 350,000 individual sessions of sport coaching and life skills. 93% of people who started in Coach Core are either still part of the programme or have graduated successfully. 80% of our graduates are coaching young people six months after graduation. And most significantly, 98% of Coach Core graduates are in employment or training.

“Coach Core currently operates in 7 cities across the country. But such is the demand for these highly skilled coaches that I am delighted to announce that The Royal Foundation will be expanding our investment in the programme. Today we are launching three new Coach Core programmes in: Middlesbrough, Devon, and Bristol.

“We believe that our graduates here today really are the future of coaching. They have each been on a unique journey, designed to build on their existing skills to equip them with the tools to be effective role models and mentors in their communities. I invite all of you to learn more about the programme and to help us take Coach Core to the next level — giving even more young people the opportunity to unlock their talent through sports coaching. We know that our unique model of building a programme through local partnerships to deliver coaches back into the community works – the figures speak for themselves!

“I’d like to close by saying a huge congratulations to the graduates on your achievement. You have dedicated yourself, alongside your fellow apprentices, investing blood, sweat and tears to become not just a great coach, but a great employee, mentor and leader in your community. I have no doubt that for those graduating, this will have been tough at times. Many of you have told us your stories – many of you faced hardships along the way, and some of you were even told you would not succeed. But in completing this course you have shown just how dedicated and capable you are. You should all be incredibly proud of what you have accomplished. Even more importantly, you should be excited about the futures you are now embarking on. William, Catherine and I, and everyone involved in the Coach Core Programme are incredibly proud of you.”

A royal source has given an update on Kate’s HG and ability to work, saying: “She’s better and is keen to do as much as she can. But she’s taking it day-to-day in deciding what she can do.”

Kate wore a new but familiar-looking blazer for this event, sporting a blue version of the Philosophy di Lorenzo Serafini Double-Breasted Twill Blazer she wore to the Air Cadets back on Valentine’s Day. Both versions sold for $1,515.

As she did with the red version, Kate styled this blue version with her black turtleneck and black skinny jeans and her Kiki McDonough Lauren Leaf earrings. Kate switched up her boots, though, opting this time for a new pair from Russell & Bromley: the Fallon Dry Mid Zip Chelsea Boot (£295).

I’m sure the skinny jeans debate will rage, as it did back in February. I, personally, don’t care if she wears skinny jeans with this jacket since the jacket is long enough to cover her butt. I will say, though, that the black jeans are faded so her blacks don’t match.