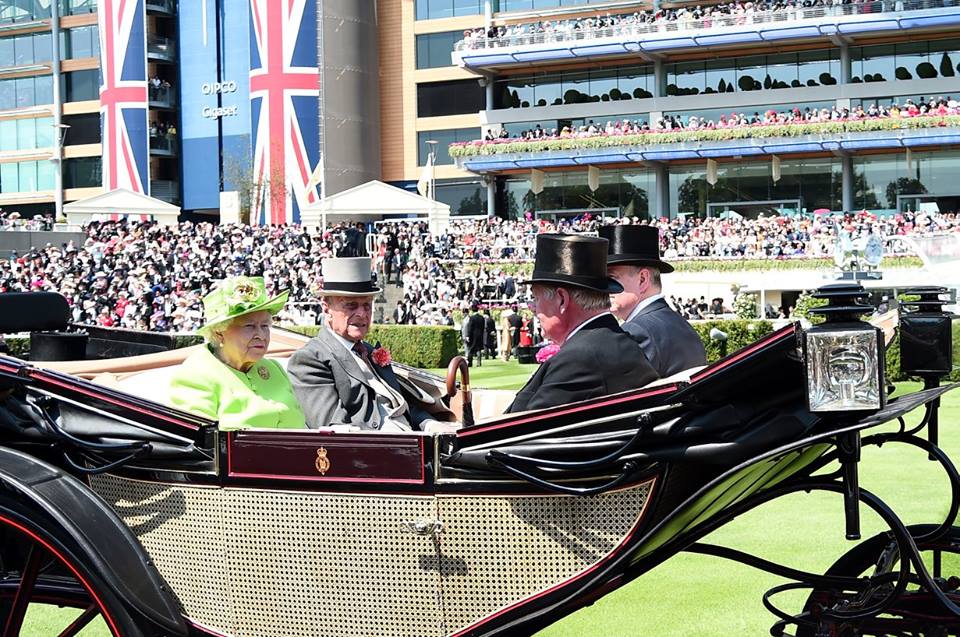 This year’s line up for Day 1 included Queen Elizabeth, Prince Philip, Prince Andrew, and Lord Vestey in carriage 1. HM wore a lime green Stewart Parvin outfit with a matching lime green Rachel Trevor Morgan hat. She is wearing her gold and diamond Singapore Peranakan Diamond Jubilee Brooch which she received as a gift in 2012.

William and Kate occupied the third carriage with Prince Edward and Sophie, Countess of Wessex. 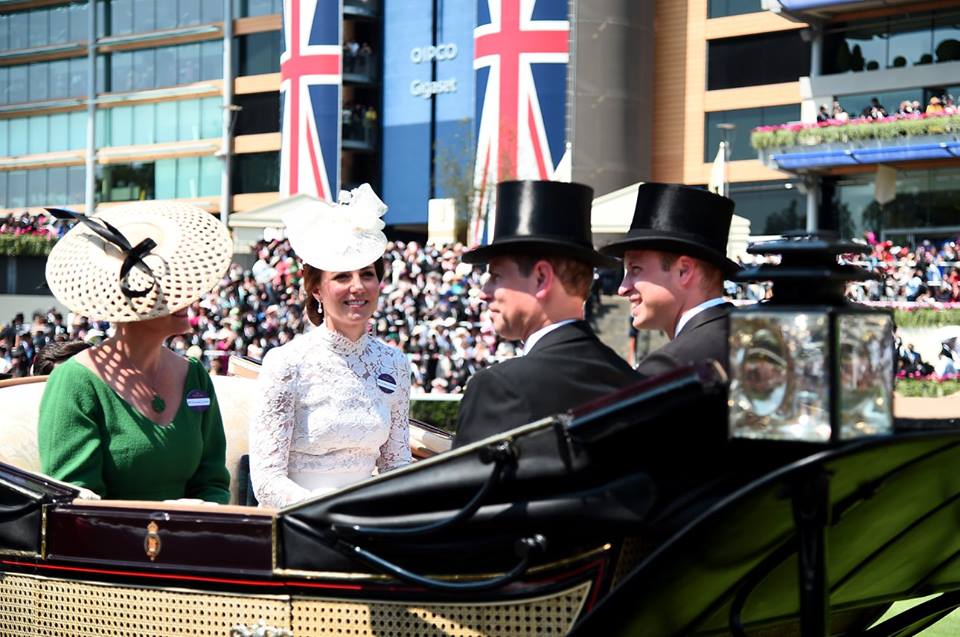 Sophie went with a new, bespoke green dress from Emilia Wickstead and a hat by Jane Taylor.

Last year, when Kate wore that white lace D&G dress, I said I didn’t dislike the idea of the look, I just disliked the execution. So I guess Kate wants a do-over because she again chose a white lace dress, white hat, and nude accessories.

This year, Kate chose a new, bespoke white lace dress from Alexander McQueen. The white lace dress Kate’s is based on sold for $3,685, but Kate had hers altered to be longer. I am mostly never a fan of Kate’s alterations, but I actually think Kate’s looks better than the original here. Kate wore a new, white floral hat, and a new nude clutch, Loeffler Randall‘s ‘Tab’ clutch ($275).

Princess Anne, Zara Tindall (who kissed pretty much everyone) and Mike Tindall were also in attendance, but didn’t ride in carriages.

Other photos: Charles and Camilla presented the prize for the St James’s Palace Stakes.

And William and Kate presented the prize for the King’s Stand Stakes.

Kate put her hand on William’s back while at the prize presentation.

Here’s a full length look at the Queen’s and Sophie’s outfits.

Kate’s dress was a tad bit see-through and when the sun was behind her you could see the outline of her legs.

Also, this happened. Sophie almost fell on top of Kate when she was entering the carriage.

Whoops! Duchess of Cambridge catches Countess of Wessex as she falls over at #RoyalAscot2017 https://t.co/zEvgtqh9ln pic.twitter.com/h9b2wqg6iB

Here is a video of the carriage procession.

The Duke and Duchess of Cambridge are present at #RoyalAscot for today's racing as Her Majesty The Queen leads the Royal Procession pic.twitter.com/3bDK8ovUND

Additionally, KP announced that Kate will visit the Victoria and Albert Museum on June 29 to open the new Exhibition Road Quarter.