Kate Middleton hosted Heads Together runners outside of Kensington Palace yesterday, April 19, to wish them luck with preparing for the London Marathon, which is on Sunday. 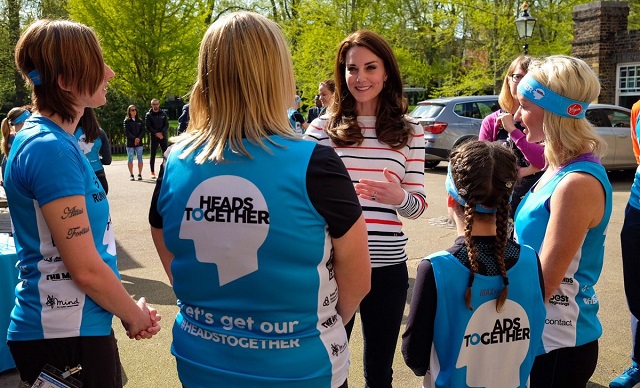 Kate spoke to the Team Heads Together runners about their reasons for running the London Marathon for Heads Together, and ended up praising Prince Harry for his recent interview about his own mental health struggles and mentioning the “mixed emotions” that come with first time motherhood.

“Asked about Prince Harry’s candid interview, in which he spoke of having counselling to come to terms with his mother’s death, [Kate] said: ‘We all felt there was very much a campaign to get everyone talking and have these conversations. We’ve got to do the same, you know, so he’s been brilliant.’

“Jamie Moloy, a headteacher, told the Duchess at the event: ‘What I love is your brother-in-law talking the other day, because that’s just ignited it’. He added Prince Harry was now a ‘real hero to a lot of people’. ‘Absolutely,’ the Duchess replied.

“The Duchess, mother to Prince George and Princess Charlotte, also met Kiss FM’s Neev Spencer, who suffered post natal depression after the birth of her daughter, Genevieve, now nine months. She told the radio DJ: ‘Nothing can prepare you for motherhood – especially the first time round, the mixed emotions.’

“The Duchess, 35, also had an inspirational message for eight-year-old Bella Rodway, telling her to deliver the Heads Together message to her pals. She told Bella: ‘Do you talk about your feelings to anyone? You need to lead the way with your friends. Even if you are not feeling good or worried about stuff.'”

The London Marathon also annouced what role the royals will have on Sunday.

“Runners in the 2017 Virgin Money London Marathon will be given a Royal send-off on Sunday 23 April when The Duke and Duchess of Cambridge and Prince Harry will be the event’s official race starters, along with double Olympic rowing gold medallists Helen Glover and Heather Stanning.

“The three Royals will push a giant red button at exactly 10:00 to send 35 elite men and more than 39,000 mass race runners on their 26.2-mile journey from Shooters Hill in south east London to Westminster.

“Earlier, Glover and Stanning, who won the women’s coxless pairs gold at London 2012 and Rio 2016, will start the seven World Para Athletics Marathon World Cup races for wheelchair and ambulant athletes, and the elite women’s race featuring many of the best marathon runners in the world.”

Here’s where I can’t help myself making a joke that only William and Harry will push the giant red button because Kate can’t push buttons.

This event was held outside and the runners were all dressed in their HT gear, so Kate dressed down in a new striped top and skinny jeans.

I have not been a fan of Kate’s past striped tops, but this new one from Luisa Spagnoli I actually like. It’s the “Muvi Pullover” and it costs $280. Kate’s colorway isn’t available, but I would totally buy the yellow if it weren’t $280. I just can’t bring myself to spend $280 on a sweater.

Also, Kate is wearing a mic on her collar and mic-pack in her back pocket. Not sure why she was wearing a mic, but because of it you can hear her really well in the video from the event – you can find the video here, as of time of posting it’s the first one.