As we edge closer to Sunday’s London Marathon, Prince William, Kate Middleton, and Prince Harry‘s week of mental health continued as they officially opened Global Academy yesterday, April 20, in support of Heads Together.

The royal trio visited the newly opened state school, which offers academic and vocational training to prepare 14-19 year olds for careers in the broadcast and digital media industry, and met with students who help produce the Heart Breakfast Show and LBC’s Nick Ferrari Show. 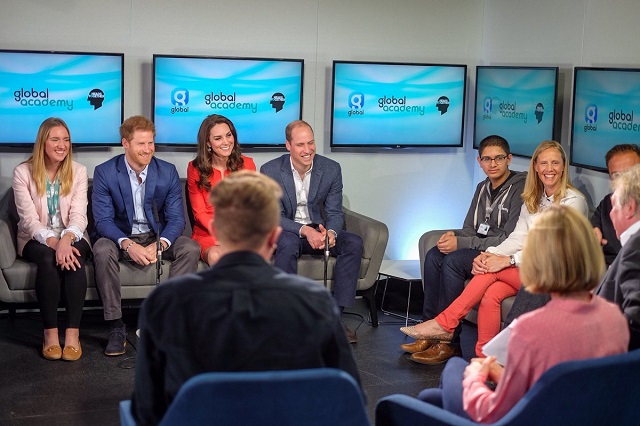 William viewed an audio project listening to EMI’s vinyl recording of early speeches of the Royal Family, and Harry visited a classroom where students were learning about the science of sound. 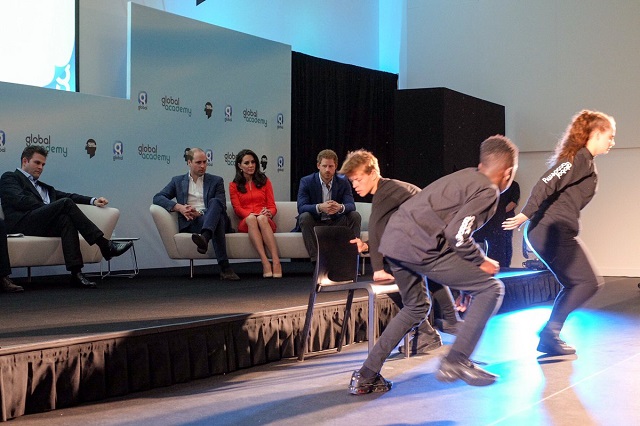 Kate sat in with students working on a radio show with the theme of mental health. From the Daily Mail:

“‘Is this an issue you knew about or had experienced before this?’ Kate asked. ‘Have any of you spoken to your friends or family about issues that have been bothering you? The important thing is to be able to start a conversation if there is.’

“One of the students she chatted with was Oliver Monger, 16, from Uxbridge, who joined the academy when it opened last September and hopes to go into the film industry. He told the Duchess: ‘I’ve not really had a problem I’ve needed to talk to someone about, but meeting you is a new thing. I don’t really know how to speak to someone so high. I’m quite shy.’

“‘Is it quite weird having such a huge space and not having many people here?’ she asked. ‘You must feel quite special?’

“Afterwards an exhilarated Oliver said: ‘That was just fantastic. It has really boosted my confidence. I had no idea what to say at first but she really put me at ease.’

“The Duchess appeared very impressed by the facilities on offer to students, saying: ‘It’s just brilliant that they have the chance to put what they learn into practice. It’s the best of both words.'” 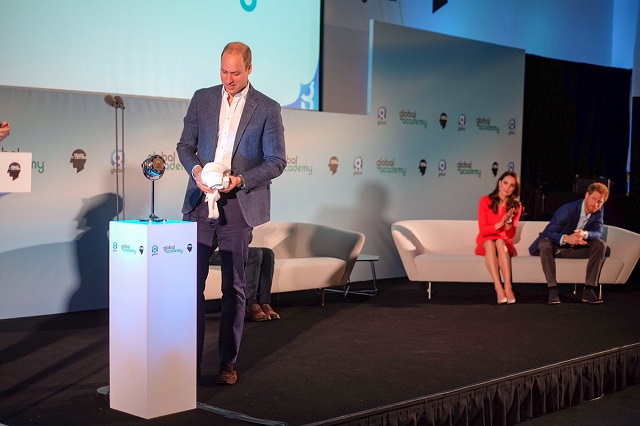 William, Kate, and Harry then joined Global Academy students and Global presenters for a roundtable discussion about mental health.

“It’s having those age-appropriate conversations and bringing in the topic of mental health really at different levels. Whether it be at a happy level or a more serious level. It’s the same with younger children, and even helping parents to start these conversations from a much earlier age but through play even if their language hasn’t yet developed. Very young children actually don’t even have the language to express how they’re feeling, so it comes out in behavioural problems. So being able to find ways to address those problems really early on is great.”

Kate also talked about feeling isolated after having children, saying:

“It is lonely at times. You do feel quite isolated. But actually so many other mothers are going through exactly what you’re going through. But it’s being brave enough, like you obviously were, to reach out.”

“I think the whole country has shown a real appetite to want to talk about this. We’ve sort of unlocked something. It’s like taking the lid off a boiling pan. It’s been simmering for a very long time and everyone’s desperate for it to come out. It’s just providing a mechanism. We need to prioritise mental health.”

William’s comment… First off, this is interesting considering Harry said in his interview from earlier this week that he bottled up his grief for so many years before dealing with it. But also, this type of comment does more harm than good. Because there are people who will read that and think that they are weak for not having dealt with their issues yet, and then that will drive their depression even more, and then they won’t get help. That may not make sense to everyone, and it may not be true of everyone who suffers from depression, but depression is a negative feedback loop and that is true for some people. I understand what William was going for, but he said it in a very unhelpful, tone deaf way.

They then watched performances inspired by the theme of mental health before William unveiled an EMI microphone, which was created for George VI in 1936, to officially open the Academy.

Kate wore a new red skirt suit by Armani, the Collezioni Women’s Suit ($848). She paired it with her Rupert Sanderson Malory pumps and her Etui Bags nude clutch. She wore her Mappin and Webb Empress White Gold and Diamond Drop earrings and necklace, and her Cartier watch.

I actually like the suit, especially the jacket. I’d love to see Kate mix and match that jacket to other skirts and pants, too.

Rebecca Deacon made an appearance after getting married last month.